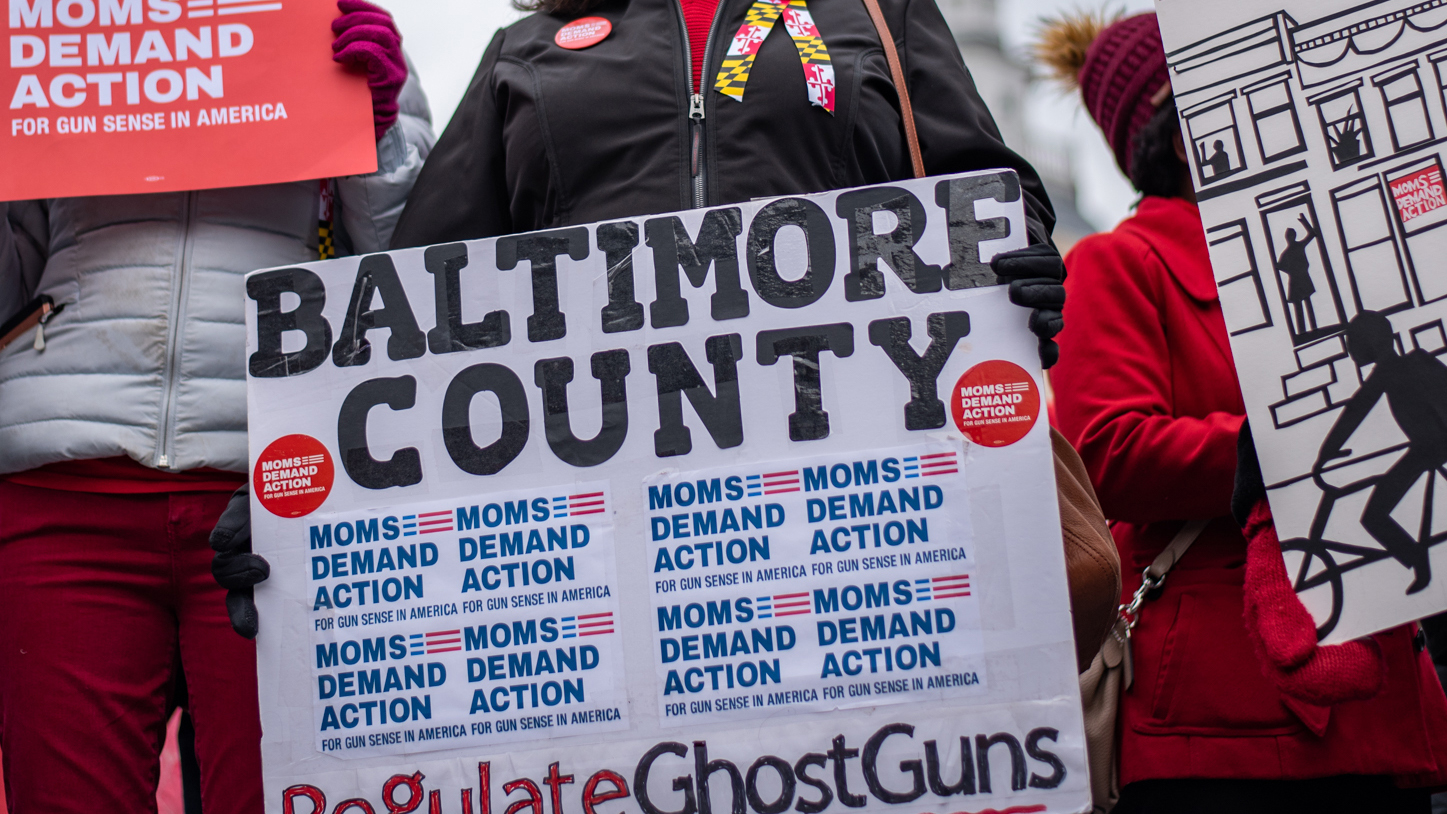 Activists gather outside of the Maryland State House in Annapolis on Tuesday, Jan. 25, 2022, to support legislation that would ban ghost guns. (Joe Ryan/Capital News Service)

Maryland state lawmakers are fast-tracking regulations on ghost guns — unserialized and untraceable guns that can be bought online and assembled at home.

The legislative move came as ghost guns made headlines after they were used in a Jan. 21 shooting at Magruder High School in Derwood, where county police said the suspect used a ghost gun to shoot and critically injure another student in one of the high school’s bathrooms.

The incident ignited a wave of activism from gun control advocacy groups that culminated in a protest outside the Maryland State House on Jan. 25. The groups at the rally urged lawmakers to prioritize ghost gun legislation during this session.

Lily Freeman, a senior at Walt Whitman High School in Bethesda and co-founder of the school’s chapter of Students Demand Action, was one of the activists who spoke at the rally.

“Maryland should not be a state where individuals can assemble deadly untraceable weapons in their kitchens without a background check,” Freeman said. “To me, it is senseless.”

Freeman missed her first day of school of the spring semester to speak at the rally. As a student, she felt a large amount of responsibility fell on her to promote the bill.

“I still signed up without a second thought because to me, even though it should not be teenagers’ jobs to advocate for common sense gun safety measures, it somehow has become our jobs,” Freeman said.

The same week, lawmakers introduced legislation that would ban the sale, receipt and transfer of unfinished parts used to make ghost guns as of June 1. An outright ban on ghost guns could be put in place in January 2023 if the bill is passed.

Violation of the law would result in a misdemeanor, resulting in up to three years of prison or a fine of up to $10,000.

The bill’s House of Delegates sponsor Del. Lesley Lopez (D-Montgomery) and Senate sponsor Sen. Susan Lee (D-Montgomery) have championed the bill for years, but it has failed to gain approval in the past, said Melissa Ladd, the chapter leader for the Maryland branch of Moms Demand Action.

Ladd lives down the street from Magruder and substitute teaches at the elementary school that feeds into the high school. She said that it was “a mixed bag of feelings” to see other lawmakers take up this issue only after another school shooting.

“It’s honestly enraging, but … it does give me hope,” Ladd said. “Unfortunately, it takes a tragedy sometimes for our work to get prioritized.”

Maryland Attorney General Brian Frosh has voiced support for passing the legislation this session after a rapid proliferation of ghost guns in crimes across the state.

Frosh appeared with Del. Lopez, Sen. Lee and law enforcement officials from across the state to formally introduce the bill in a Jan. 20 press conference, just one day before the shooting at Magruder High School.

“There’s a new urgency around how these firearms are being used, there’s new changes in the regulatory environment,” Lopez said during the news conference.

Baltimore police seized 345 ghost guns in 2021, with 32 linked to a shooting or homicide. Ghost guns account for 15 percent of all guns seized in the city, as reported by WBAL TV in Baltimore.

Another troubling trend for activists is how often children are involved in the use of ghost guns, according to Karen Herren, the director of legislative affairs for Marylanders to Prevent Gun Violence.

Gun rights activist groups, such as the Maryland State Rifle and Pistol Association, have raised concerns that an outright ban would stop this country’s long tradition of creating homemade firearms.

In a statement to NBC News4 Washington, the group said banning ghost guns criminalizes a normal behavior and “a hobby industry based on the illegal activities of a small percentage of the population.”

But Herren believes the current legislation provides a balance between regulating ghost guns and upholding the Second Amendment.

The new legislation will have a hearing in the House of Delegates on Wednesday and will be followed by a Senate hearing on Feb. 16.

Herren said the bill’s traction in the legislature and attention from the attorney general makes a huge difference in promoting its passage.

“It definitely changes the dynamic and makes it a much stronger possibility that it gets over the finish line,” Herren said.