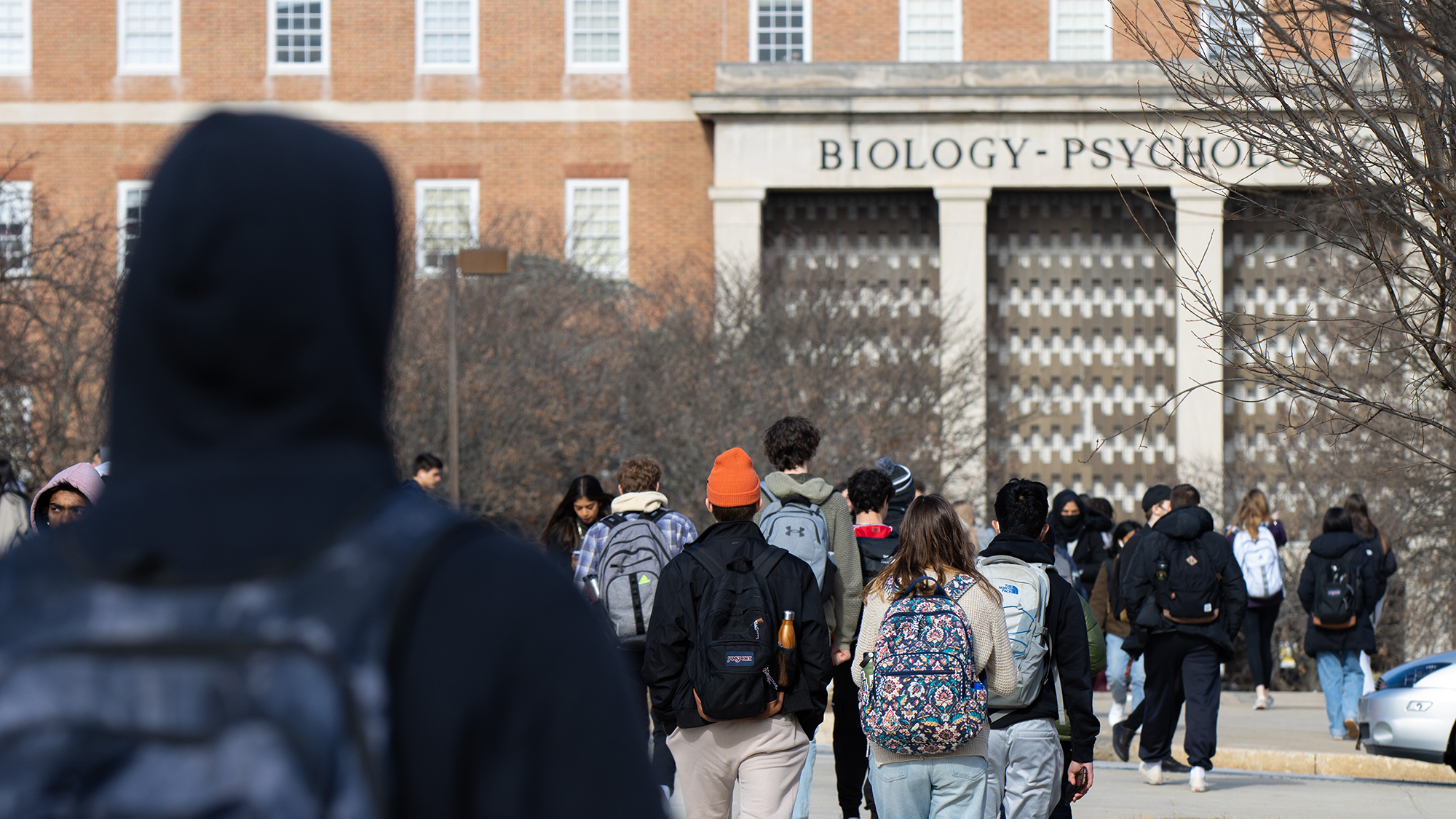 Students walk to class on Jan. 24, 2022, the first day of the spring semester. (Kurt Leinemann/The Diamondback)

You may have heard of grade inflation in schools. It’s theoretically pretty simple: Schools that do better get more funding, both private and public.

One problem naturally arose, though: How do you measure better? For some, GPAs rose to the occasion, proposing an allegedly standardized measuring stick between schools. Consequently, GPAs became a metric for school success while being self-administered.

Both playing and refereeing the game of creating a successful school district creates quite the incentive for the schools looking to gain resources, notoriety and prestige. And so, as the Department of Education reported, “the average high school grade point average was 2.68 in 1990. By 2016, it had risen to 3.38, with the biggest inflation occurring in private independent schools.” And this massive jump in grades isn’t attributed to some incredible difference between generations of students, but rather high school administrators needing results — results that do not equip students for their post-secondary education past their application submissions on the surface.

But grade inflation, which predominantly exists in secondary education, is far from the only flaw in the schooling system. Children are taught from a young age that attending school is a moral imperative, and schools in many states are incentivized to promote one phenomenon: attendance inflation. Just like grade inflation, acquiring superficial success is much easier and less costly for schools than actually giving kids the right resources and paths to success.

As Jackie Spinner reports, “​​when attendance is directly tied to school funding — as it is in seven states, including Texas and California — or factored into school quality ratings, it sends the wrong message about staying home when doing so could help stop the spread of germs.” Coercing kids to attend school for the sake of the school regardless of personal context is not an act of individual bravery or perseverance; it is a sad, shameful and harmful reality that highlights the inefficacy of often overlooked and underfunded school systems.

The most obvious and prevalent danger in not missing class today is the presence of the coronavirus. This public health emergency has promoted a better general consensus of staying home when sick for everyone, but this new insight begs more questions about our everyday lives pre-COVID-19. How many kids got the flu or a nasty cold because one of their peers’ parents prescribed that they should ‘tough-it-out’? Anecdotally, I know my allergy seasons became much milder after masking up, and after I used to have to take at least 2 to 3 days per semester off just for allergies.

In the wake of the COVID-19 pandemic, the Centers for Disease Control and Prevention discourages the practice of perfect attendance awards for both students and staff. Even pre-COVID, a 2014 study conducted jointly by Harvard, UCLA and Stanford found surprising students with perfect attendance by honoring them caused them to miss more days of school afterward. The students felt like they had overachieved just by showing up, and they didn’t feel exceptional enough to warrant recognition. If even the students receiving these awards don’t believe in them, who are they even for? This is a no-brainer, but as a society somewhat adept at recognizing the toxicity of endlessly chasing perfection, we’ve dropped the ball on this attitude for a long time.

The truth is that while school is invaluable for raising the next generation, the system is set up to churn out people who might not be able to distinguish fulfillment from productivity in the corporate world. Attendance expectations are unhealthily fostered in professional life too; the nearby Montgomery County Public Schools award perfect attendance for employees, incentivizing them not to use their sick leave or child care leave. As notable 20th century rich guy John Rockefeller said before funding the General Education Board that influenced a century of public schooling policy: “I don’t want a nation of thinkers, I want a nation of workers.” Instead of setting themselves up for a life of monotony, like Rockefeller would have wanted, kids and adults alike should be taught so much more.

Continuing antiquated systems and mentalities in the most formative part of the lives of the youth only serves to threaten their immune systems and hinder their development as people by prioritizing the wrong things in their lives. Encouraging kids to go to school is an undeniably good thing, but encouraging them to do it at the cost of themselves is horrific.