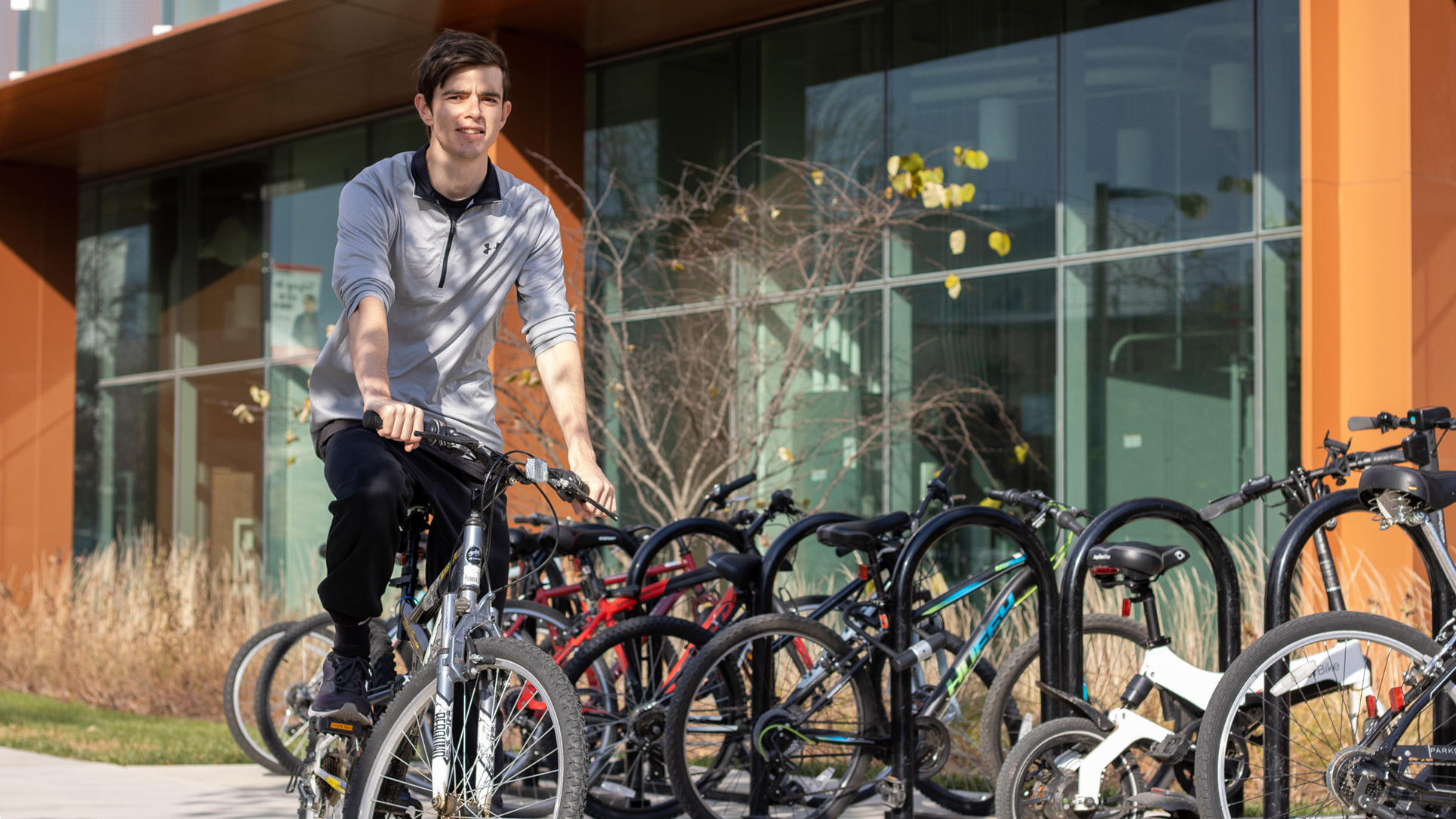 Nick Webb, a senior civil engineering major and the founder of the University of Maryland's Bike Advocacy Club, pictured on his bike on December 6, 2021. (Jordyn Salow/The Diamondback)

At the beginning of the fall 2021 semester, Nick Webb bought a bike to commute to his classes at the University of Maryland.

Webb, who lives in Courtyards, had been planning to use the UM-Shuttle Bus as his mode of transportation, but after deeming the buses unreliable and the walk to and from classes too far, he decided he would bike.

Almost immediately, the civil engineering major realized that his biking experience, as well as the experience of his fellow cyclists could be drastically improved given some accommodations.

In October, Webb formed Bike Advocacy Club, a group on campus aiming to improve road safety and push for these accommodations such as bike lanes and ‘sharrows,’ which indicate when a lane on the road is meant to be shared between bikers and cars, he said.

The group, which will officially be a club next semester, quickly gained traction, Webb said. He created an online forum and posted it on this university’s subreddit so people could sign up for the club. He also tabled at a Bike UMD event in November. Almost every biker who came up to the table joined the club’s GroupMe, he said.

“Everyone who’s on a bike realizes that, ‘Hey, things could be better. There’s a problem,’” Webb said.

The group also hopes to work with the local government in College Park to make sure the bike infrastructure is continuous and expands past the campus, Webb said in his Reddit post.

Harry Hall, a junior civil engineering major and a member of the club, said when he found out about the club through a Reddit post. His first thought was “Yes … Someone’s done it.”

As a commuter from Silver Spring, Hall’s bike is his only mode of transportation. He can afford to have a car, he said, but he is not interested in the extra costs a car would impose and enjoys biking over driving.

“[Biking is] more relaxing [than driving]. I get exercise that I wouldn’t otherwise. It puts me in a better mental space,” Hall said.

When Hall first began biking to the university this semester, the route that Google Maps gave him, which went along University Boulevard, was “very dangerous,” he said.

Construction work, speeding cars, broken glass on the ground, gravel and poor road and sidewalk conditions on the route convinced Hall to opt for a safer route, even though it added about 10 minutes to his commute, he said.

Faculty adviser for the club and electrical and computer engineering professor Dr. Nicole Mogul bikes to College Park from Washington, D.C., so long as it’s not too cold or dark. So when she heard the club needed a faculty adviser, it just made sense that she do it.

“I’ve honestly been waiting to connect to people who want to do this for so long,” Mogul said.

Mogul said better bike infrastructure, such as bike racks, bike lanes and signals specifically for bikes wouldn’t just help out cyclists, but would also help cars feel safer and more comfortable by helping them look out for cyclists on the road.

Both Webb and Mogul said bike infrastructure is an equity issue as well. Webb said many people who bike do so because they can’t afford to own a car.

Mogul said with better bike infrastructure in place, people could live farther off-campus to avoid high housing prices in College Park and pay less in gas and parking. The infrastructure would also make the university more accessible for other small vehicles such as wheelchairs and scooters, she said.

In addition to better and more consistent bike infrastructure and traffic policies, Hall also said establishing activities for bikers in the community would help to enhance and grow bike culture around the university and College Park.

“Could that happen here? I don’t know, but I’d like to give it a try,” Hall said.

While the implementation and improvement of better infrastructure could take time, Mogul said, the bike advocacy club is about more than just getting a few extra bike lanes.

“I think we can change the tone of the conversation,” Mogul said.
This story has been updated.