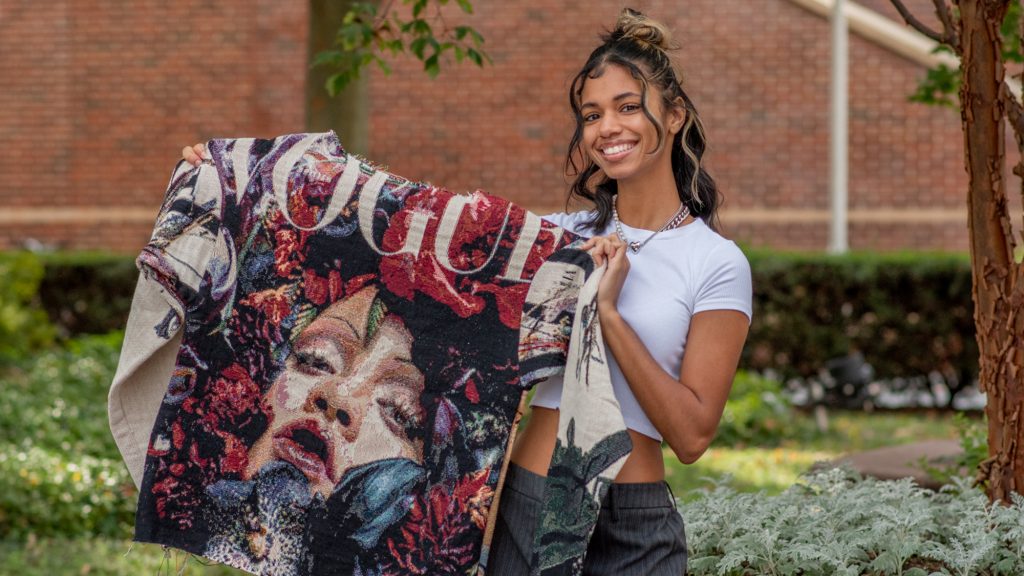 Sierra Sesay holds her Rihanna custom sweater. Sesay runs her own business where she takes pictures that customers send in and turns them into clothing using blankets. (Autumn Hengen/The Diamondback)

What began as a viral TikTok fashion account has transformed into a business for University of Maryland sophomore Sierra Sesay.

In January 2020, Sesay posted a TikTok video where she designed her own pants. The video garnered thousands of views. Some users asked to purchase their own pair in the comments.

“Three weeks later, I started a business,” the management and marketing major said. “It literally happened so fast.”

Now, the company — sierrasinvogue — sells custom handmade woven clothing, including pants, crewnecks and sweaters. After letting customers decide what pictures and designs they want on their pieces, Sesay sews what they send in into clothing.

Sesay has always had an eye for business. When she was younger, she hoped to start her own natural product line for those with curly hair like her, she said. In 2016, her uncle, who was an aspiring fashion designer and music artist, died. She didn’t want his legacy to go unknown. Her uncle was a major inspiration for her love of fashion, she said, which motivated her to learn how to sew.

When customers started requesting orders, Sesay began designing pieces from woven blankets and sewing them into clothes, which she was able to sell online as custom orders.

“I let people have their own creativity because they’re able to choose their own photos,” she said.

Lulawit Adhanom, a sophomore information science major, is a friend of Sesay’s. Adhanom’s favorite piece is the shorts because they’re personalized and perfect for summer, she said. She’s excited to see new designs by sierrasinvogue as Sesay branches out.

Another friend of Sesay’s, Gabrielle Cramer, thinks sierrasinvogue pieces are creative because everything is hand-sewn and she can customize each piece toward the customer.

“Anyone can find something they like because they have a lot more say,” the junior dance and marketing major said.

Recently, sierrasinvogue was featured in this university’s Black Student Union fashion show. For Sesay, it was an exciting opportunity to design her own collages catered to what she likes, she said. Some of her designs included album covers from artists such as SZA and Frank Ocean.

Sesay manages the business entirely on her own, from shipping to creating custom orders. During the summer, Sesay said she would sew for 12 hours every day.

Managing the business while balancing school can be difficult sometimes, Sesay said. She takes custom orders in increments based on how busy she is with other commitments. Working out of her dorm, rather than in her workspace at home, poses its own challenges, too. Now, fabrics are scattered all over her dorm, she said.

“I’m a full-time college student, my classes are not easy … I’m sewing until 3 a.m. in my lounge right next to my room,” Sesay said. “It’s a lot that people don’t see behind the scenes.”

“Her growth isn’t really usual,” she said. “She gained thousands of followers within a couple of months, and it was really crazy to see.”

For Sesay, all of the hard work is worth it when she sees the end result. In the future, Sesay plans to transfer to the Fashion Institute of Technology and live in New York City. The opportunities in the city are endless, she said. She also hopes to have a store in the city and be a creative director for a luxury brand.

Cramer, who has been there since the beginning of sierrasinvogue, is excited to see how Sesay grows her business.