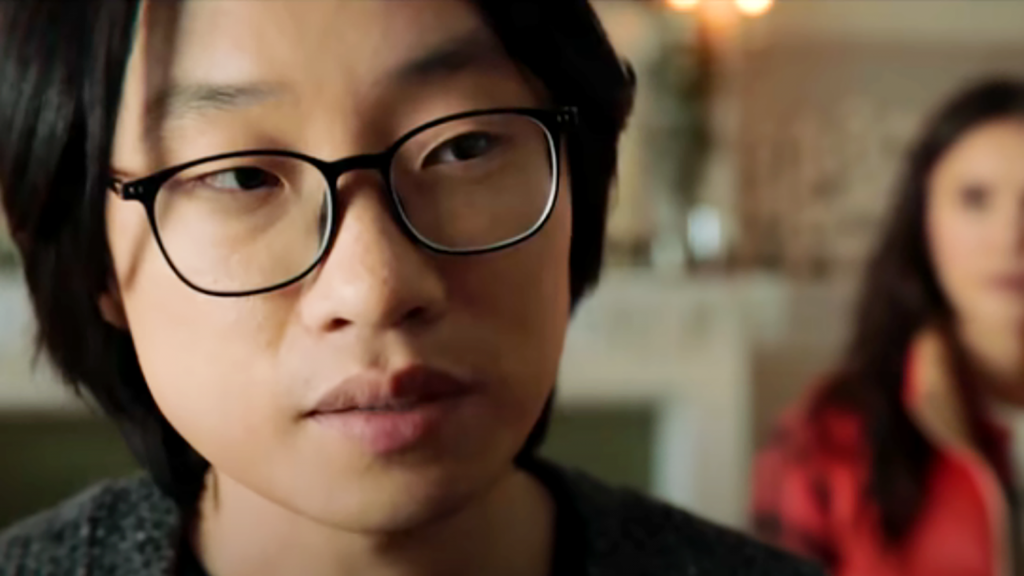 Netflix’s upcoming romantic comedy releasing this November, Love Hard, is a failed love letter to Asian Americans. Instead of being uplifting and supportive of the Asian American community, it promotes the erasure and misrepresentation of Asian American men. Jimmy O. Yang, who performed at the University of Maryland’s Homecoming Comedy Show, stars  in the movie  as a hyper-desexualized, nerdy Asian guy who catfished a white woman, played by Nina Dobrev.

Just from the trailer, many Netflix watchers have grown frustrated at this inaccurate representation. It’s unsettling that Yang’s character has to serve the white woman by setting her up with another date to win her heart at the end, and it’s discomforting that Yang’s character’s growth to becoming “attractive” comes from the white woman’s perception.

It is necessary to have prominent Asian Americans stop these inaccuracies and stereotypes off-screen before they’re further publicly perpetuated on-screen.

While it can be problematic to judge a book by its cover, I cannot help but approach Love Hard with caution. I wonder if the director, Hernán Jiménez, or writers, Danny Mackey and Rebecca Ewing, knew that while they followed the same storyline that romantic comedies are famous for, they were also following the same stereotypes that have harmed Asian American men.

Media as an active outlet to the general public has extreme influence on societal behaviors. Misrepresentations can strengthen false stereotypes and fuel racism not just for those outside of an underrepresented group but within the group as well. Especially since media can be the only experience of other cultures or people an audience may encounter, how media portrays characters has a major impact on one’s perception on a group.

Since the first Chinese communities immigrated to the United States, American society has desexualized Asian men as an attempt to minimize their threat since they were portrayed as stealing white American jobs. Labor and immigration laws forced Asian Americans to take work that the white men didn’t want such as cooking and laundering — work normally seen as feminine.

The only tropes that Asian American men portray in popular media are tropes that emasculate and desexualize them. For example, many Asian American male characters are seen as asexual side nerdy characters who don’t have the opportunites to experience romantic relationships compared to the white male protagonist.

There has been media that challenges harmful stereotypes about Asian Americans. In the Never Have I Ever, Mindy Kaling’s position in the steering wheel of the show has led to an overall positive response. Kaling reflected on her own complex experiences as an Indian American and avoided making a one-dimensional character as much as she could.

However, it shouldn’t be easier to pick out examples of harmful perpetuations of stereotypes than it is of those that combat them. There needs to be more Asian Americans writing, directing and creating the stories of us. Stereotypes of Asian Americans won’t just disappear on their own. It’s imperative that Asian Americans in the spotlight challenge and change these perceptions both on and off the screen.