Hiding homelessness through hostile architecture only hurts the community 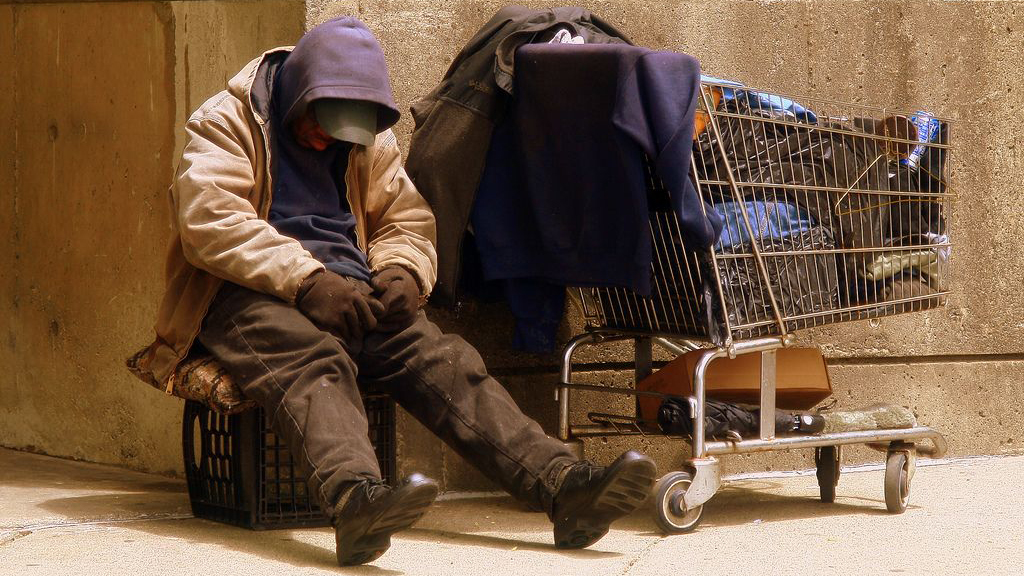 A homeless veteran on the streets of Boston, Massachusetts. (Photo courtesy of Matthew Woitunski)

When I think of cities, I imagine a densely-packed, interconnected community full of public places that invite you to interact with new people and enjoy the hustle and bustle of city life. However, while visiting Washington, D.C., certain areas of the city don’t fulfill this vision of a community-oriented space. As I walked the streets, benches and places to sit were few and far between and were often tilted or curved in an unwelcoming way. I quickly realized that this design wasn’t a coincidence, but instead an intentional decision meant to discourage homeless people from using them.

What I encountered in Washington, D.C., is known as hostile architecture — city amenities designed to limit the way the space can be used. This punitive approach doesn’t solve homelessness, but instead deters homeless populations from occupying public spaces.

Hostile architecture weaponizes the built environment against certain users of public spaces deemed “undesirable” by businesses and governments. Hostile architecture can include sloped or curved benches, armrests in the middle of benches, and spikes covering areas protected from weather. It can also include ghost amenities, or a lack of amenities such as benches, fountains or buildings with protective overhangs.

Hostile architecture not only punishes the homeless, but other city residents as well, creating city spaces that are uncomfortable, unwelcoming and inconvenient for everyone. Instead of relying on reactive strategies that negatively affect everyone, cities should instead solve the problem at the source by housing the homeless and making cities more accessible and community-oriented.

While hostile architecture pushes away the homeless from wealthier and tourism-driven areas, governments and planners euphemistically justify the acts as protecting public safety and increasing tourism and consumerism. Those designated as non-consumers are alienated from free public spaces through an uncomfortable and hostile environment.

Put simply, these practices have no place in modern city planning. Hostile architecture is not only irrational, but also morally repugnant and detrimental to all of society.

Hostile architecture doesn’t solve homelessness — far from it. Instead of solving the socio-economic roots of the problem, it just moves homeless people out of sight. And, from a moral standpoint, it seems wrong that governments are more focused on harassing and punishing those who need help, rather than establishing the supportive programs needed to solve the problem. Through this mindset, homeless people are not treated as humans, but as public nuisances that must be removed from public spaces.

In addition to the ineffectiveness and moral repugnance of hostile architecture, it is also a net-negative policy for everyone who uses public spaces. It fundamentally transforms public spaces from places of community, where people can chat with neighbors and enjoy the scenery, to unwelcome environments intended to prevent people from using it for too long. This approach creates discomfort and inconvenience for everyone, but especially neglects the accessibility needs of many. Why do we as a society tolerate harming everyone for an immoral policy that doesn’t solve the homelessness problem?

The ideology of punishing vulnerable populations for issues often out of their control shouldn’t be the status quo.

Governments can and should invest in housing the homeless and providing the support they need to get on their feet. Studies have shown savings for local governments when the homeless receive housing instead of spending the money on the punitive approaches currently used across the country. In addition to solving homelessness at the source, cities should remove uncomfortable hostile architecture that divides us. They should instead focus on creating functional public spaces that connect people together and create a sense of community.

Hostile architecture does not make sense and has never made sense for solving societal problems. Its primary goal is not to solve the problem of homelessness, but to exclude and isolate people from public spaces. It is unethical, ineffective and has the simultaneous effect of ruining the community aspect of shared spaces. Public space is meant for everyone, and designating it for only “socially desirable” people who can spend money reflects poorly on our supposed morals. Our country must move past apocryphal anti-homeless policies and instead create thriving, sustainable and supportive communities that work for everyone.