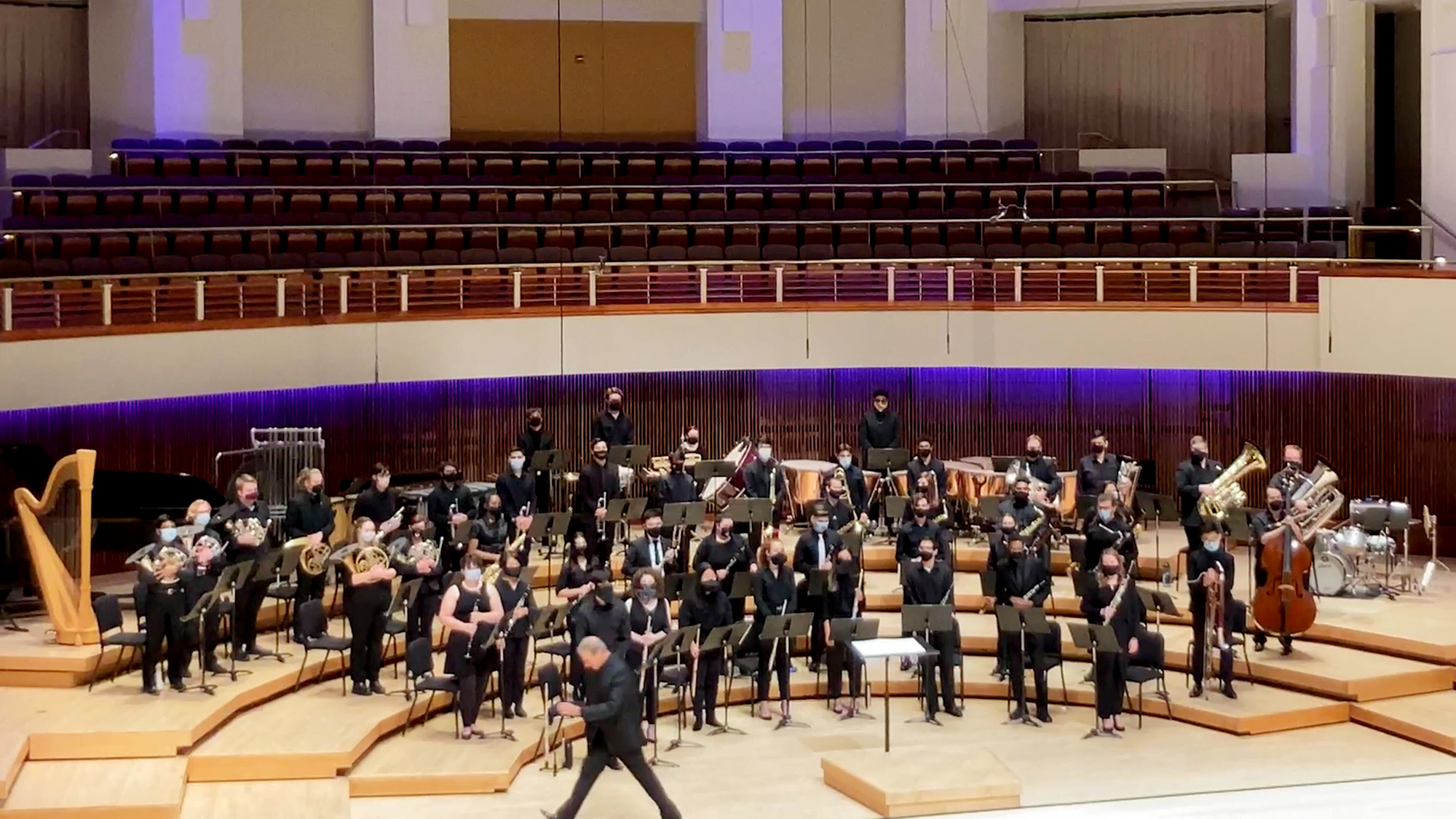 Breaths hitched as David Neely’s hands suspended above the glitz and glam of the Thalea String Quartet in the Dekelboum Concert Hall at the Clarice Smith Performing Arts Center on Oct. 8.

The first notes University of Maryland students played for a live audience since March of 2020 were that of Jessie Montgomery’s “Banner,” a piece that investigates the patriotism of the United States.

The Thalea String Quartet is a fellowship quartet, one of three fellowship ensembles, at this university’s music school. The four musicians played their hearts out with excellent execution, bringing their own character to the bow and reminding us what we missed most about live music.

The Symphony Orchestra is an ensemble of music majors here at the university. Their program featured pieces by underrepresented composers and classic masterworks such as the Giuseppe Verdi “Overture to Nabucco” and Aaron Copland’s “Appalachian Spring.”

Following the intermission, the second half of the concert opened with a low brass chorale of three trombones and a tuba, filling the hall with a warm and pure sound welcoming the audience back to their seats.

“We’re feeling a little more hopeful, but we didn’t for a long time. I think ‘Va, pensiero’ was the way we felt for a long time,” said Neely, director of orchestral activities. The “Overture to Nabucco” was a hopeful outlook to the future, in hopes of things turning for the better.

Copland’s “Appalachian Spring,” a well-known composition, was brilliantly put together. Soloists performed with virtuosity and emotion. The piece featured recognizable themes, and yet, it still felt like I was listening to it for the first time. The final sustained note was lifted with Neely’s hands, carrying it into silence as people in the audience were frozen with awe.

University music students have been particularly resilient and patiently waiting for this moment to come. They were eager to perform again for the campus community — and they did not disappoint.

Mark Wakefield, manager of instrumental ensembles, and Aaron Muller, senior assistant director of productions and operations, were key components to ensuring students had the space and facilities to safely and effectively rehearse and perform in the Dekelboum this semester. Students were able to make the most out of it — especially wind musicians, continuing to wear modified masks.

“Our students have been great about understanding that … adaptability and flexibility are things that serve you well as a musician and that … we’re all in this together. We’re all going through this together, and we make the best of it,” Wakefield said.

The Wind Orchestra performed the following night in the Dekelboum Concert Hall.

Lush sounds of the ensemble swelled with a force that moved everyone with it. The ensemble’s beautiful and delicate interpretation of “Seascapes” by Ruth Gipps, conducted by graduate student Alexander Scott, who conducted sans score and guided the ensemble with impressive memory. Every note was confident, and the reverb following made sure you knew again.

Dr. Michael Votta, director of bands, then led his ensemble through “Kammersymphonie No. 1” by Arnold Schoenberg.

A string quartet took center stage, backed by a string bass and ten winds. The group filled the venue with sounds of uncommon chromatic waves. But the Wind Orchestra played it with a familiar tongue and ear.

Following the intermission, the Wind Orchestra performed a composition titled “Kung Fu” by Shuying Li, who was present at the concert. The ensemble presented a world of colors with excellent execution and exciting percussive elements. Their excitement bounced on stage, landing right into the audience’s hands as their applause roared.

Li came to the stage and took a bow for her excellent work, and also expressed her gratitude for the immaculate performance.

The Wind Orchestra concluded the performance with Jules Strens’ “Danse Funambulesque,” with sweeping sounds in the tutti wind choir to enthralling elements such as powerful trombone glissandos. The audience saw visions of “death-defying feats of a tightrope walker at the circus” as described in the program.

Votta expressed his relief to finally be back on stage.

“Being in a room full of people experiencing music together — there’s nothing like it, and I didn’t really fully appreciate how wonderful it was until I couldn’t do it,” he said.

“I’m glad that people are going to be able to come and experience the concert,” he said.

The music school has many exhilarating concerts that you do not want to miss. You can catch the Symphony Orchestra with the university’s Concert Choir on Nov. 12, or see the Wind Orchestra on Nov. 13 later this semester.