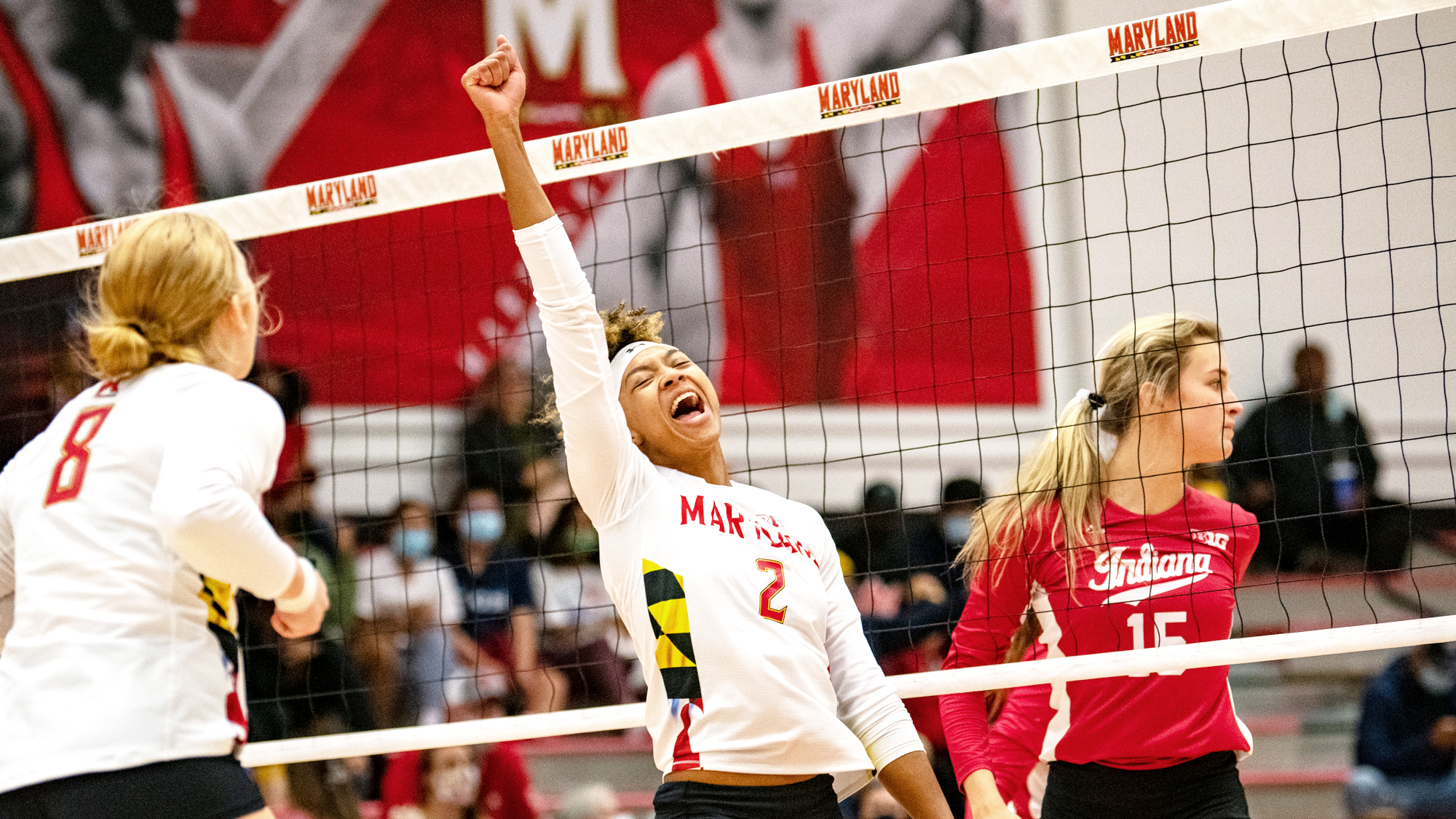 Maryland volleyball was heading down a slippery slope.

After upsetting then-No. 2 Wisconsin at home to kick off their conference slate, the Terps dropped four consecutive Big Ten battles. Their loss against Northwestern on Friday featured three blown match points and was a gut-punching five-set defeat against a beatable conference foe.

“We finished, had a lead, and didn’t execute down the stretch, and made some errors and gave a win away,” said coach Adam Hughes. “It’s tough. You gotta defend your home in Big Ten play.”

Maryland also entered Saturday’s matchup against Indiana battered. The Terps lost their star libero to an apparent head injury after a spike struck Milan Gomillion in the face late in the third set of Friday’s loss to the Wildcats.

And with the visiting Indiana Hoosiers rolling after a 3-1 defeat of Rutgers on Friday, it was the perfect opportunity for Hughes’ squad to slip further into its slump.

But the Terps stood tall on Saturday evening.

Spurred by a suffocating defensive showcase from middle blocker Rainelle Jones, Maryland coasted to a 3-0 victory over former Terps volleyball coach Steve Aird and the Hoosiers. Jones’ 12 blocks helped hold Aird’s squad to a dismal .063 hitting percentage, and Indiana’s star outside hitter Breana Edwards finished with more errors than kills on the evening.

For Hughes, Maryland’s ability to look past its disappointing loss to Northwestern and look ahead was a sign of growth and maturity for the young squad.

“They did a good job this morning coming in in decent spirits, I think they were a little disappointed with the result but did a good job working it out,” Hughes said.

Due to a quick turnaround between games, Hughes said, the squad had to focus intently to scout their opponents and watch film before Saturday’s match.

With the victory, the Terps halted their four-game slump to move to 14-4 on the season. And perhaps more importantly, Maryland’s win was a complete team effort.

Five Terps racked up six or more kills in the contest, as setter Sydney Dowler spread the wealth evenly from the middle of the floor. Maryland relied not just on their star outside hitters Sam Csire and Paula Neciporuka for the brunt of the offensive production, but fed middle blockers Jones, Laila Ricks and Hannah Thompson to keep the Hoosiers guessing all evening.

“I feel like we had to go back to our basics, I feel like we shouldn’t be defeated by Northwestern in the loss,” Jones said. “We learned a lot from just making those little tiny errors and changing it into better details.”

By compartmentalizing a crushing five-set defeat on Friday, Maryland came out stronger to defend its home court on Saturday. And with a bevy of Big Ten battles on the horizon for Hughes’ squad, the Terps will look to continue learning and growing as the season progresses.

“I’m proud of the group for their resiliency … Obviously having a match point last night was a tough way to lose that match, and we talked about wanting to learn from our past,” Hughes said. “I think the one thing we’re learning is how to wash those, grab what we need to improve on and move on.”