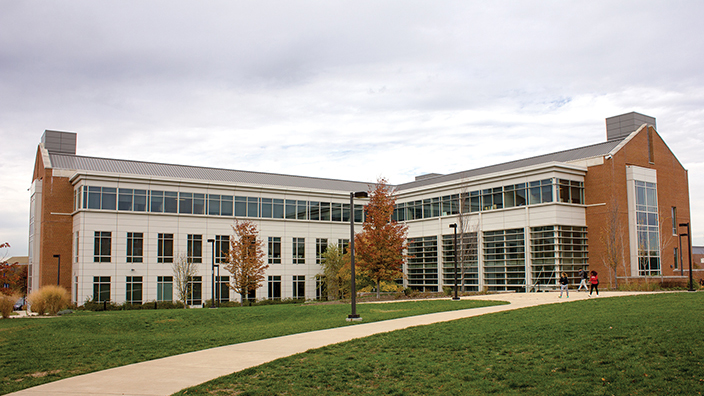 Knight Hall is home to the Philip Merrill College of Journalism. (File photo)

By Emilly Hahn
For The Diamondback

Starting this fall, the University of Maryland’s journalism college is partnering with the information studies college to launch a new Master of Professional Studies in Data Journalism. The program gives students the option to complete the degree virtually.

The program structure is geared towards teaching students how to navigate open data, public records requests and scraped or automatically accumulated data. Students will also be equipped to investigate issues by finding data and evaluating it, according to a news release from Josh Land, the communications manager for the journalism college.

As part of the proposed program requirements, students would have to complete 36 credits of courses and a choice between Advanced Capital News Service Bureau or Advanced Online News Bureau, an “Information Management Capstone Experience,” and independent study or a semester at the Howard Center for Investigative Journalism.

The official proposal gives a sample plan of four semesters for full-time students or the choice of a six or eight-semester option for part-time students.

“I think we have a couple different groups of people in mind who might be interested in the skills and concepts that we teach in this program,” Mussenden said. “It can help journalists become better journalists with a broader range of skill sets, but we also think it’ll be pretty interesting for people who come at this from the other direction, who might have some experience with data analysis or data programming.”

With data becoming an increasingly lucrative part of the journalism industry and the lack of dedicated data journalism programs at other universities, the master’s program at this university is all the more meaningful, Mussenden said.

“Our competitors in data journalism … are large private schools, where tuition is really high, ” said Katherine Izsak, the assistant dean for academic affairs in the information studies college. “So we’re hoping that we’re going to offer something that is much more compact, feels much more feasible, and students can do at a lower rate while still being this kind of unique set of skills that media outlets are saying they need.”

According to Izsak, the program is available to graduate students who wish to enroll now through a “soft launch,” allowing them to begin enrolling in classes that would count toward the master’s degree.

Derek Willis, a lecturer in data and computational journalism, said the new master’s program “really takes a lot of the best of both of our schools.”

The application process will open later this year for the fall 2022 semester, according to Izsak. While there is currently no firm deadline for application, depending on how large the group of initial applicants are, the deadline could be extended to as late as early next summer, Izsak said.

Tony Cabral, a senior journalism major, said it would be a good investment to learn more about data journalism or even get a degree in it.

“I think it’s a smart move for Merrill College because I feel Merrill has been growing exponentially over the past decade,” Cabral said. “And this is just a really exciting, new direction towards greater national prominence and making sure we’re on the forefront of what journalists should be learning.”