AOC got political at the Met Gala. The backlash shows it worked. 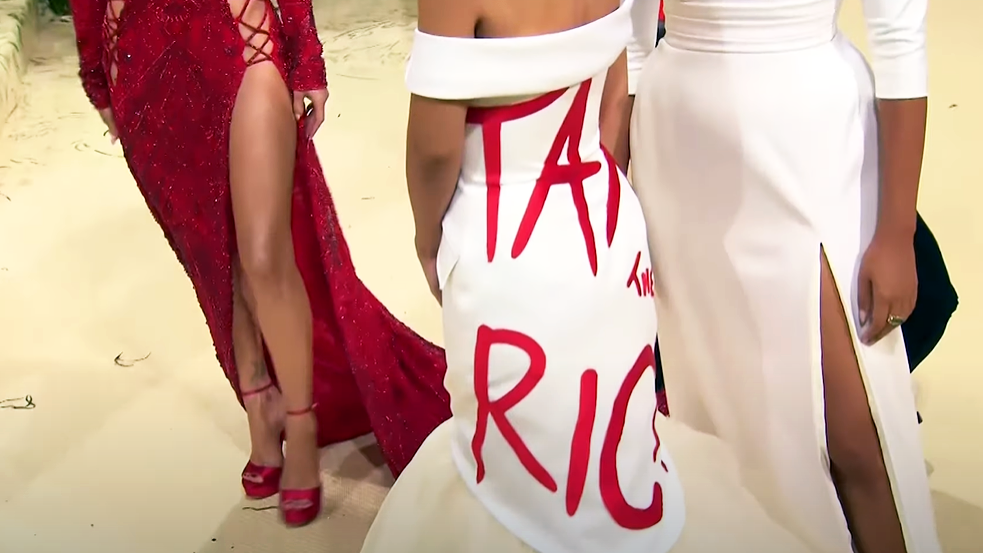 By Jordan Budney
For The Diamondback

From Lil Nas X’s three-outfit ensemble to Kim Kardashian’s jet-black bodysuit covering her face, the 2021 Met Gala looks did not fail to spark conversation. Despite big ball gowns or even green babies, Rep. Alexandria Ocasio-Cortez (D-N.Y.) with her sleek “Tax the Rich” gown was one of the most notable looks from the evening, in part due to the wave of backlash from critics.

On Sept. 13, the Metropolitan Museum of Art once again hosted the Met Gala, marking the first one since 2019 as the COVID-19 pandemic canceled last year’s event. The theme for this year was “In America: a Lexicon of Fashion.”

Ocasio-Cortez arrived at the event wearing a white ivory wool gown designed by Brother Vellies founder Aurora James. On the back, the gown had “Tax The Rich” scrawled in bold red letters.

Ocasio-Cortez seized the opportunity of being a political representative at a well-covered event by combining current events and personal opinions into one.

Soon after her gown reveal, a variety of remarks appeared online from her opposing party and even her own.

Donald Trump Jr. did not hesitate to tag Ocasio-Cortez in a post, calling her a “fraud” for “hanging out with a bunch of wealthy leftwing elites.”

[From tuxedos to quilt cloaks: The evolution of men’s fashion at the Met Gala]

In response to the backlash she received, she defended herself on Instagram.

“I and my body have been so heavily and relentlessly policed from all corners politically since the moment I won my election,” Ocasio-Cortez wrote.

James, the fashion designer behind the dress and fellow guest at the Met Gala, praised Ocasio-Cortez for making a statement at the event, particularly a controversial one.

“It takes a lot of courage to get a seat at the table and show up there with your topic of conversation on your back — and it’s one that’s going to make people uncomfortable — and she didn’t back down from that,” James said in an interview for The Kit.

Other celebrities also represented their political beliefs in their outfits, including Cara Delevingne, who wore a fitted top saying “Peg the Patriarchy” to represent women’s empowerment. With the addition of more celebrities using fashion to display their political opinions, this could lead to future changes for upcoming Met Gala looks.

Maybe Ocasio-Cortez wanted to stir the pot. Maybe she wanted to create controversy for her viewers to discuss later. But clearly, she wanted to impact the audience, and her dress did not fail to become one of the most memorable Met Gala looks for 2021.