NextNOW Fest had something for everyone this year 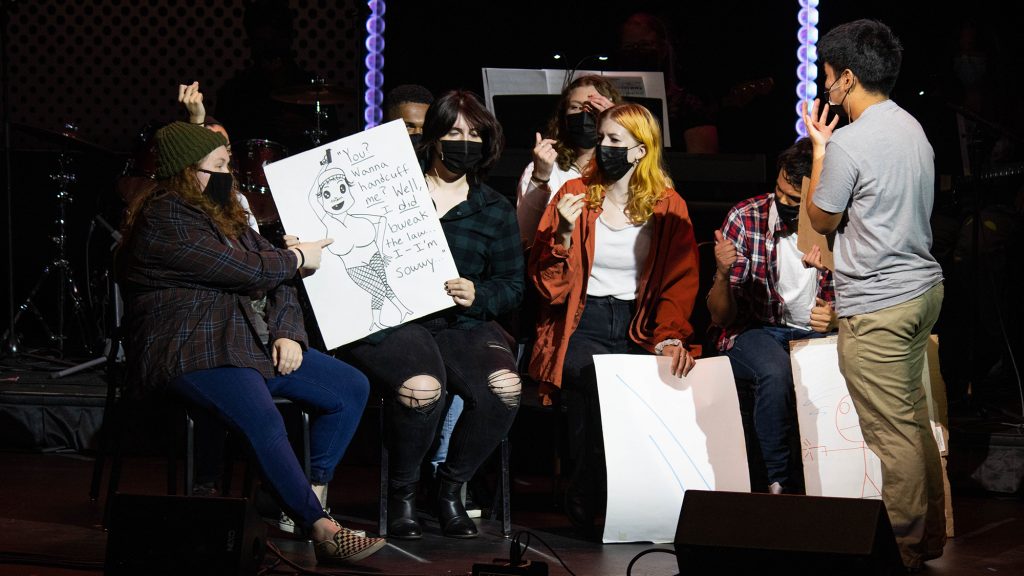 On Sept. 17, students filled up Kay Theatre to watch Maryland Night Live. For two hours, students doubled over in laughter at skits and cried at heartfelt musical performances by AwBi and Benny Roman.

Following the performance, students met in the front entrance of The Clarice Smith Performing Arts Center to be greeted by the Festival Snapshots with Monumental Magazine marketplace.

NextNOW Fest historically has been held at The Clarice, full of art galleries, musical performances and other interactive exhibits. In 2019, students would expect to have just a weekend full of these activities.

Megan Pagado Wells, associate director of programming, wanted to focus on the expansion of NextNOW, expanding across the campus and disciplines. This was the first year students could see aspects of technology disciplines introduced to the arts, which made the festival to be inclusive to those who have those interests.

“We’ve expanded to seven days of programming across campus from Monday to Sunday,” Wells shared. “We’ve [also] partnered with amazing partners … like Studio A and Stamp Gallery at the Parren J. Mitchell Art-Sociology building, with the UMD Art Gallery and the Michelle Smith Collaboratory for Visual Culture, with the UMD book lab … and of course the immersive media design showcase.”

Brayan Pinto, senior studio art major, is the creator of the project “Within Reality.”

“My goal was just to make sure people have fun, come see it, like dance around pretty much,” Pinto shared. And students did exactly that. “My project is a visual effect project that takes the input from a camera and then outputs a special effect on top of it.”

“It started with them coming up with their concept of designing, and then testing and prototyping it, and that was both something that they did individually,” Martin said.

One particular fan of the exhibit was the dean of the arts and humanities college, Bonnie Thornton Dill.

“I loved watching the dancers as that went on, but I also really liked the meditative piece,” Dill said, referring to Pinto’s project and junior immersive media design and English major, Cassiel Arcilla’s project, “Meditations.”

Dill came and spoke at the Iribe to students about the Arts for All Initiative.

“The arts, plus tech, plus [the] social justice piece. [We] really wanted people on all parts of the campus,” Dill said. “It’s like really hearing the students talk about what they’re doing and also seeing the kinds of the double majors people are doing or the various interests that they have and how they come together.”

On the other side of the campus at The Clarice, ARTECHOUSE had its own interactive installations. This organization is currently based in only three locations: New York, Miami and Washington, D.C. But for students at NextNOW Fest, they had exclusive access to the exhibit right here on the campus.

Danielle Azu, ARTECHOUSE representative, shared that the installation, Renewal 2121 featured in the Grand Pavilion, was a focus on traditional Japanese scenes and cultural aspects but set in the year 2121. The objective was to focus on climate change and its effects on Japan in the future.

This is the second time ARTECHOUSE has made an appearance at NextNOW and students absolutely enjoyed it once again. Freshman computer science major Vruti Soni’s awe at the exhibit encompasses the objective of creating a more inclusive arts environment for people with interests in technology.

“When I first came, I thought that colors really drew you to the exhibit. All of them had art in tech, and I hadn’t seen that before,” Soni said.

Amy Yim, junior math major with a minor in arts leadership, was a student curator for NextNOW and touched on the merging of disciplines with art.

“I want more of the sciences to be integrated because there are so often very separate ideas in people’s mind[s],” Yim said.

NextNOW coordinators and student curators had much more to offer than these two exhibits. The line up had something for everyone from comedy, to art and to even technology.

Even if you weren’t able to come to NextNOW, it came to you. Whether you were crossing McKeldin listening to Terrapin Brass or walking through Stamp with the Ignis Wind Quintet, you had a small taste of NextNOW.

CORRECTION: Due to a reporting error, a previous version of this story misquoted Megan Pagado Wells. Wells said that NextNOW Fest partnered with the Michelle Smith Collaboratory for Visual Culture, not the Michelle Smith Performing Arts Library. This story has been updated.