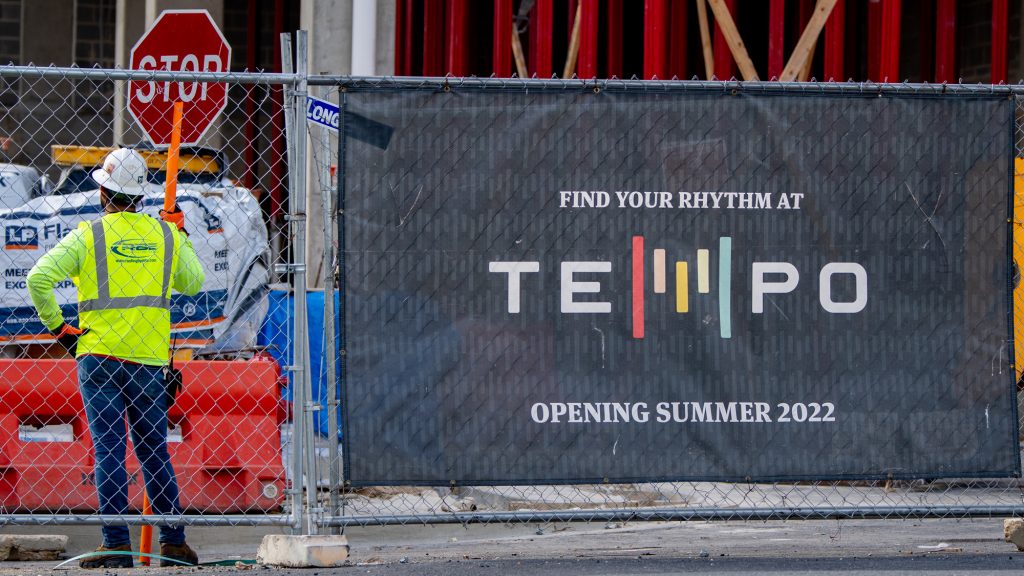 A worker stands inside the construction site for a new apartment complex called Tempo on Route 1 on Sept. 9, 2021. (Joe Ryan/The Diamondback)

A few of College Park’s seemingly endless construction projects might actually be done soon. Two new apartment complexes, the Tempo and the Aster, are expected to be up and running this summer. Demand for off-campus student housing in College Park is and will continue to be high, so using the “build more housing” strategy looks pretty good on paper. In practice though, I think that this new development is exploiting the intense need for student housing rather than meeting it.

Both apartment complexes will rent at market rate, meaning that prices will be comparable if not more expensive than the Varsity and the View (which are already way too expensive). On top of that, only the Tempo is student-specific housing, while the Aster complex is advertised as part of the “Discovery District,” meaning that the average UMD student will probably be competing with salaried yuppie transplants for decent housing.

The severe lack of decent, affordable student housing in College Park has been a looming issue for years. Undergraduate students usually still have to turn to expensive (and shittier) housing options such as South Campus Commons and College Park Towers, among others. If undergraduates strike out with those, their only options are cramming enough people into a tiny house to keep the rent barely under $1000 per month.

The situation can be even worse for graduate students, who have often less, more expensive options that are farther away from campus. Some of them are also in the United States for the first time and lack the social connections that other students have that can lead to finding a place to live. I think we all recognize that simply letting “the market” run its course at will won’t do anything to make housing cheaper in the area. Private developers have no real incentive to make housing more affordable because they essentially work with a captive market of tenants — students who they know have no choice but to live and work in the area. The city of College Park is well aware of this, and time is running out for them to take legislative action to actually help the student population.

The Graduate Student Government did just pass a resolution that would have a direct impact on housing affordability in College Park. The GSG bill would lobby to expand the Prince George’s County rent cap so that it can include students living in off-campus housing, not just those who have recently experienced “a severe loss of income” as the policy currently states. A cap would establish a percentage-based ceiling on rent that would ensure at least some affordability for tenants. While this would be an excellent policy (if it ever got passed), a lot more would need to be done in a city and county that is uniquely bad for student renters. Unlike Howard and Montgomery County, Prince George’s County housing laws do not require a certain number of housing units to be rented at below the market rate.

Furthermore, the city could attempt to pass a low-income tax credit as a direct way to provide the incentive for lowering rent and making sure that future housing remains affordable. I think this would be the most painless and uncontroversial way to make housing more affordable here, given that the credit would offset any potential losses that landlords and developers would complain about.

If the university really wanted to be a positive force for its students, it would make financially challenged students eligible for direct rent subsidies. Instead, I expect them to sit back and watch students get priced out of the area they live, work and learn in. Housing insecurity at any level can be devastating, especially for a college student. For every student with wealthy parents who are willing to pay for Terrapin Row or the View, there could be a student taking out loans or working another job to pay their lofty rent. While organizations such as CHUM and GSG are doing what they can to alleviate this issue, only the city and university can act to help the population that does quite a bit for the school and the region. If they don’t, housing affordability will get worse before it gets better.