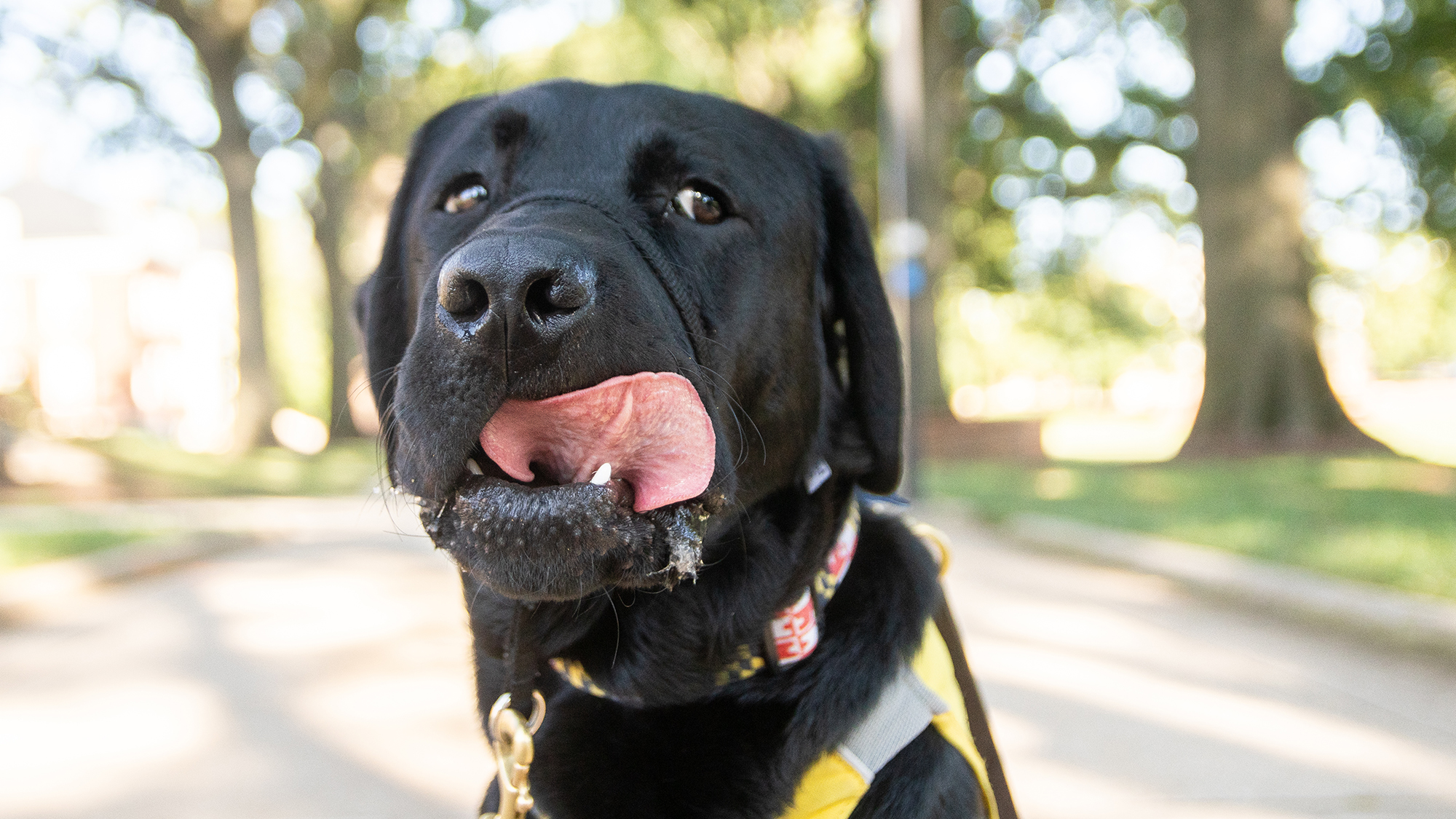 For many dog owners, college means saying a sad goodbye to their animals. But for some students at the University of Maryland, college is an opportunity to grow closer to a furry friend.

Terps Raising Pups is a club where students can raise and socialize guide dogs for the Guide Dog Foundation and America’s Vet Dogs. The club is entering its fifth year at this university. During the pandemic, members operated virtually.

As students reflect on the past year and a half, they said they struggled, they learned and they were grateful.

Liberty was often Keren Sneh’s motivator to get out of bed in the mornings during the pandemic.

When Sneh, a senior bioengineering major, let the enthusiastic 10-month-old yellow lab out of her crate each day, she was met with a wagging tail that was a bright spot amid the monotony of the pandemic.

Sneh got involved with Terps Raising Pups during her freshman year after seeing club members around campus with their dogs. Since then, she has had two dogs — Willie, whom she raised during her sophomore year, and Liberty, who she has been raising since December.

With classes online and fewer opportunities to take the dogs out in person, the pandemic was difficult, Sneh said, but it also taught her how to be a disciplined trainer.

“It just required being more intentional about your training, but it was sometimes nice, because if she wasn’t feeling well one day or she had a specific issue … there was more flexibility,” Sneh said.

When Liberty goes into training with America’s Vet Dogs to help a veteran or first responder, she’ll part ways with Sneh. She will miss Liberty, but knowing where she’s going helps, Sneh said.

“If you look at it completely rationally, it’s kind of a stupid thing to do … you get a dog, you put a ton of work into it and then you just give it away,” Sneh said. “But when you look at the life that they’re changing and the person that they’re helping, that really makes it worth it.”

The pandemic has been hard on Lexi Kruger’s dog Piper.

Piper is Kruger’s second dog through Terps Raising Pups. Like other service dogs in the club, Piper has struggled with the lack of puppy classes and in-person socialization, said Kruger, a senior physiology and neurobiology and psychology major.

“It’s made our dogs a little bit more reactive and made it a little harder for them to adjust to these situations, whereas before … they’d jump right in as puppies and they were just ready to go,” she said.

Since some members of the campus community have not seen too many service dogs in training for 18 months, not everyone is welcoming, Kruger said. It is frustrating when bus drivers or professors don’t understand why she has a dog with her, she said. However, she uses it as an opportunity to educate them on service dogs.

“I feel a strong responsibility to do that as someone that’s not disabled, because I’ve heard from actual service dog handlers that that’s one of the more detrimental things of having a service dog is the constant denials,” Kruger said.

Terps Raising Pups shrunk because of the lack of in-person activities. Pre-pandemic, the club had about 25 dogs, and now there are 15. As one of the club’s area coordinators, Kruger is working to increase the numbers this semester.

Amid all the difficulties of raising a dog during the past few months, Kruger found positives. Piper is part of America’s Vet Dogs’ PTSD curriculum and working with her to learn skills has kept Kruger busy, she said.

“I definitely think this was the thing that kept me active during all of lockdown,” she said. “I don’t think I’d be able to do this if I didn’t have a dog.”

Before Riggs, she had raised Maggie through Terps Raising Pups. Maggie and Riggs are almost polar opposites, Reardon said. Maggie was high-energy and a great swimmer, while Riggs is docile and an enthusiastic-yet-clumsy swimmer. It’s been an adjustment, Reardon said.

“It takes a different skill set to raise different types of dogs,” she said. “You just have to work with their personalities.”

Reardon has raised Riggs, an eight-month-old black lab, since February. She still has Maggie, who was released from her service dog program in January because of allergies as a pet. Her dogs were a highlight during the long months of quarantining, she said.

“My dogs really give me a purpose,” Reardon said. “I decided to raise [Riggs] … because I can’t imagine my life without raising at all.”

The only socialization experience Riggs had during the pandemic was in online training classes and occasional trips in public, Reardon said. It was tricky for him to adjust to in-person classes at first, but he has learned fast.

“I wasn’t really sure how he was going to do. He’s done really great, but it’s obviously a little nerve-wracking going into class with a puppy,” Reardon said.

Because she adopted Maggie, Reardon has never experienced giving up a dog she has raised. It will be difficult when the time comes, she said, but thinking about where Riggs will go makes the experience easier.

“We get attached,” she said. “But you have to think about it in the big picture. This dog is going to help someone … they really transform a person’s life.”