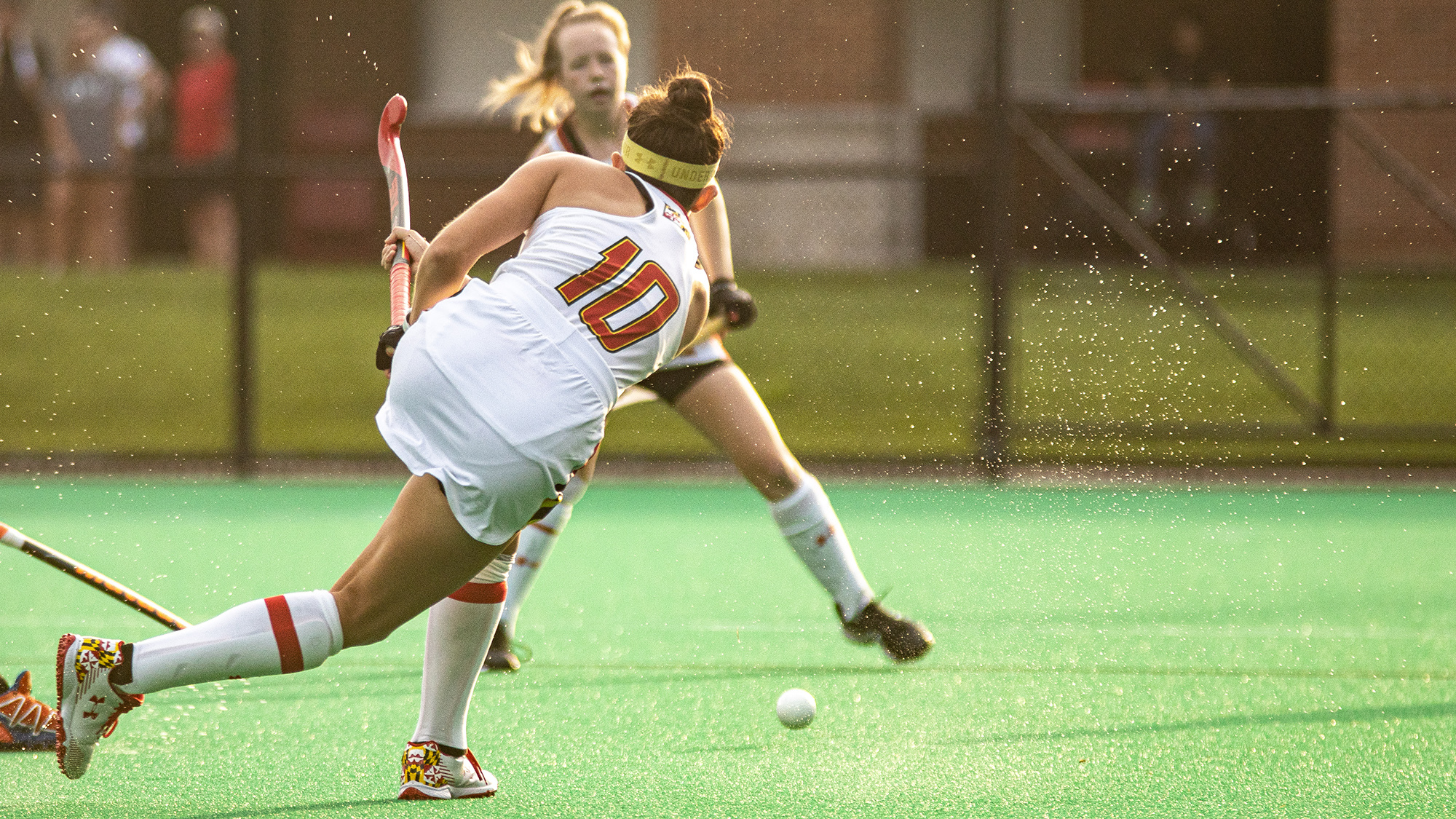 Belle Bressler shoots the ball during Maryland field hockey’s 6-1 win over the DC Dragons in an exhibition on Aug. 20, 2021. (Julia Nikhinson/The Diamondback)

Missy Meharg sat in a red folding chair atop an elevated platform on the far side of the Field Hockey and Lacrosse Complex, overlooking the pitch of the team she’s coached for the last 33 years.

She gazed through her sunglasses on the sunny, warm Saturday afternoon, watching her squad and some of its assistant coaches compete in the first half of their annual Red-White scrimmage.

And she may have had even more fun in the second half — making her way to the press tent, jumping behind the microphone and announcing play-by-play of the exhibition for everyone at The Plex.

As the clock wound down in the final quarter, Meharg’s commentary continued reverberating around the venue’s speakers, eliciting smiles and chuckles from the spectators.

“Fun is an interesting word, I mean — it’s exhilarating,” Meharg said about competing in the fall for the first time since 2019. “It’s really surreal.”

Along with an exhibition match on Friday against the DC Dragons club team, which the Terps won, 6-1, Meharg got her first look at how the Maryland field hockey team is looking this fall — and it’s made her even more excited for the start of the season.

“We have a lot of weapons,” Meharg said. “People are going to struggle with us in field play.”

Here are four takeaways from the weekend:

Anna Castaldo will be a key piece for the offense

In the spring, Castaldo started in three of Maryland’s 15 matches and collected a goal and an assist. The flex forward and midfielder’s presence clearly had an impact on the offense — one that may be even greater this year.

In addition to her goal against the Dragons, Castaldo found the back of the net again in the Red-White game. However, it was during the shootout, later, when it was evident what the Endicott, New York, native could do on the attacking front.

Castaldo made an adept move on her sequence and maneuvered past the goalkeeper before she even took her shot.

But on offense, it’s not only strong players like Castaldo that help a team be successful.

Castaldo’s early success could be attributed to the play of Maryland’s midfielders who are putting her in a strong position to score.

“Players like Anna play like they can when they’ve got great midfielders that can give them the ball where they need it,” Meharg said.

Junior goalkeeper Christina Calandra played the entire first half of Friday’s game between the pipes. And she couldn’t have performed much better, turning away every single shot from a hungry DC Dragons’ attacking unit.

The Dragons are a co-ed field hockey club with a number of Maryland alumnae, including recent graduate Logan Edmondson and Terps assistant coach and former player Kasey Tapman Asper.

The men and women on the pitch Friday evening had plenty of skill and speed, finding plenty of one-on-one shots on Calandra. But Maryland’s backup netminder kept them silent for the opening 30 minutes.

Graduate student Noelle Frost, who enters her sixth season in black and gold, took over in the second half of the exhibition match.

A few minutes in, one of the Dragons’ players drove toward the net, broke through Maryland’s defense and looked to find the back of the net for the first time all night.

But he couldn’t get it past Frost.

Once he got his shot off, it was no problem for the Terps’ star goalkeeper, who dove to her left and knocked the ball away.

On Saturday, Maryland got its first look at freshman Paige Kieft, who started in goal for the White team, limiting the Red team to just one goal during the 32-minute scrimmage.

This year, the goalkeepers are working with volunteer coach Sarah Holliday, who graduated from the university in 2019 and starred in the cage from 2015-18. Meharg said Holliday has been training a lot with them and that she is excited to see what’s in store for the trio of keepers.

“We have a lot of confidence, a lot of seniority, a lot of maturity in our goalkeeping options — all three of them,” Meharg said. “Paige [Kieft] is coming in and keeping that same tempo … Sarah Holliday is doing a great job with them.”

Much of the Terps’ offensive production last spring came as a result of execution on penalty corners. And most of Maryland’s poor offensive showings last season were due to missed opportunities after earning those chances to score.

On Friday, the Terps didn’t earn many penalty corners. But they still found the back of the net six times.

Maura Verleg, Belle Bressler, Margot Lawn and Anna Castaldo netted Maryland’s first four goals. This was Lawn’s debut on the pitch — while she did train with the team all spring, she wasn’t able to compete after transferring.

The Pasadena native and Archbishop Spalding alumna returned to the Old Line State after playing a pair of seasons at Louisville, where she scored eight goals and added two assists.

Meharg’s squad scored a trio of goals during the truncated intersquad scrimmage, Saturday. While this is all a small sample size, the Terps seemed particularly focused and collected on offense and continued to find ways to score.

The addition of Julianna Tornetta is already paying off

Julianna Tornetta has been one of the best field hockey players in the nation for the last few years, dominating throughout her undergraduate career with the Princeton Tigers. And in the fourth quarter of her unofficial Maryland debut, she took over the game.

She collected a pair of goals within seconds of each other, pumping up her teammates on the sideline and energizing the small crowd of spectators in the bleachers.

As she came off the pitch a few minutes later, her new coach smiled and gave her a fist bump.

“I wish I was able to have her out of high school,” Meharg said.

Throughout the match, both her speed and hockey skill were evident. She was particularly quick running up and down the pitch, involving herself in plays on both sides of the ball.

Meharg likened her speed to that of Brooke DeBerdine, who returns for her fifth season this fall. The older DeBerdine sister has played a critical role in the team’s midfield since 2017, and Meharg is excited to see the duo there together.

“Those two women can run all day long,” Meharg said.