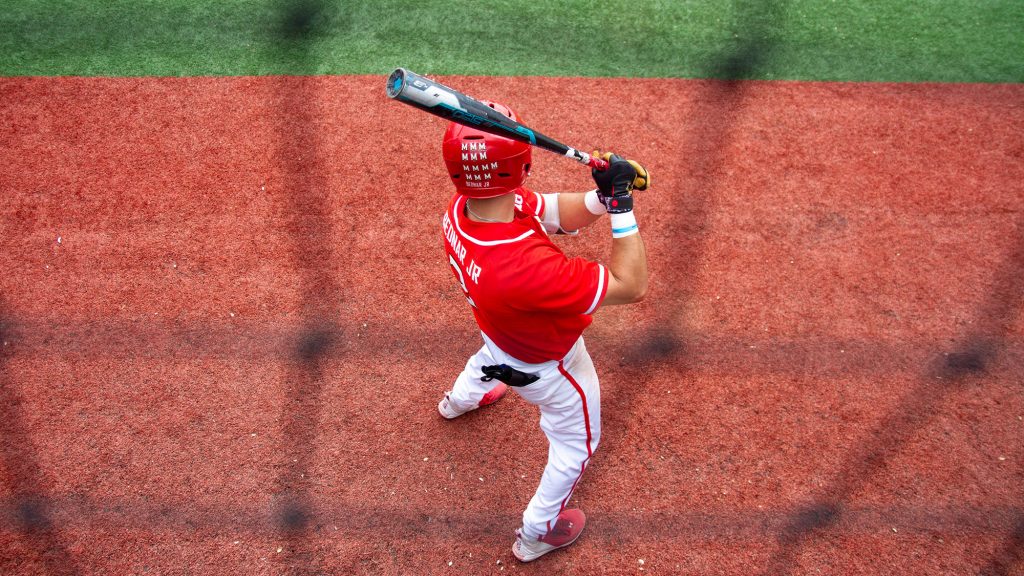 Maryland baseball coach Rob Vaughn peered through a computer screen — eyes glazed with the tearful regret of a lost season — and tried to sum up his team.

With every word that one of the youngest coaches in the NCAA tournament choked out, it became apparent what the unique quality of this group was: unshakable grit.

“This is one of my favorite teams I’ve coached in 10 years,” Vaughn, 33, said. “I’ve been a part of teams that won more games but I don’t think I’ve ever been a part of a grittier group.”

From start to finish, the Terps had just about everything stacked against them in the Greenville regional. Their best pitcher was injured in an off-field incident, and their leadoff hitter was put out due to a freak accident where a foul ball went off his eye.

If Chris Alleyne never took the opening at-bat that caused his eye to swell to the point that he struggled seeing out of it, things might’ve turned out very different. Despite the opening incident, Maryland baseball still played miraculously, losing to Charlotte 13-10 with what Vaughn described as the “heart and soul” of their offense missing.

With Maryland’s offense at full strength, the tournament bracket likely would have looked different. The Terps were forced to steamroll Norfolk State 16-0, and walk-off Charlotte off the back of an incredible start from a closer who hadn’t started in his career.

That led the Terps to duke it out with the Pirates on their home turf in an elimination game they would have to win twice to advance to the Super Regionals. And even before the first pitch, mind games had already started.

[Maryland baseball eliminated from NCAA tournament in loss to No. 13 East Carolina, 9-6]

Coincidentally, a image of pitcher Jake Kuchmaner, who had thrown East Carolina’s first program perfect game against Maryland in 2019, adorned the wall where Vaughn spoke to the media.

And he would have a hand in ending it all for the Terps.

Maryland never held a lead in its 9-6 loss to the Pirates and fought to keep pace with the perennial playoff team through nine frames.

Their season ended as it had started — blank, and with no direction.

However, like the start of their season, something emerged and took fruition. There was an unrepeatable quality of what the Terps produced in the 2021 season. Sixty-three other teams made it to the NCAA tournament, but none did what Maryland managed. Starting the second half of a COVID-shortened season with a 10-12 record, the Terps went 18-4 down the stretch to make the postseason.

“The last two months or so we’ve been playing with our backs against the wall,” Max Costes said. “At the end of the day we kind of, finally started to take the game one day at a time, one inning at a time.”

From dropping the first three games against a Michigan State team who would wear a 14-27 record the rest of the way, to second place in the Big Ten. Despite it all, the Pirates made it end unceremoniously in nine innings.

But it clearly had not been in vain. The unlikely tournament run was Vaughn’s first trip as Maryland’s head coach and represented a move for the Terps into the next echelon of teams in the Big Ten. That delayed move was due to Vaughn’s coming up as a head coach in the wake of his predecessor, John Szefc’s, departure for Virginia Tech.

Vaughn attributes some of his success to a core group of seniors who stayed with the team through hard times.

“We were 24-30 my first year as a head coach in 2018, I had no idea what I was doing,” Vaughn said. “This group didn’t quit … they showed up in a world where everybody transfers when things aren’t good.”

Seniors Alleyne and Randy Bednar both contributed 54 RBIs, 15 homers and 32 stolen bases over the course of the season. This year represented the first where those players reaped the fruit of their hard work and perseverance through a visit to the NCAA tournament. While it didn’t end with a title, it built a culture.

A culture of winning that had been forgotten, but has been renewed through the 2021 season. Despite the losses of Alleyne and Bednar for next season, the group of young players that Vaughn will retain is still rock-solid.

Matt Shaw, Max Costes, Benjamin Cowles and most of the Terps’ starting pitchers are expected to return. Optimism should be sky-high heading into a likely-full schedule Maryland will face in 2022. They should also have the benefit of a Big Ten tournament in order to prepare them for the rigors of postseason play.

The memory of this group remains the biggest strength in Vaughn’s toolbox as he moves forward into the 2022 season. A group that will likely always be a tape measure and inspiration for upcoming squads that Vaughn will manage.

The 2022 unit will have the chance to reinforce what the 2021 squad did but against a full non-conference slate they lacked this season.

And the goal for Maryland is to play host in the NCAA tournament.

“We’re gonna look back in a year or two, when we’re on the bottom of the dogpile and when we’re hosting a regional at our stadium … we’re gonna point back to this,” Vaughn said. “This group set the standard for what it means to play baseball at Maryland.”