If Democrats want to hold real policy power, they need to control the courts 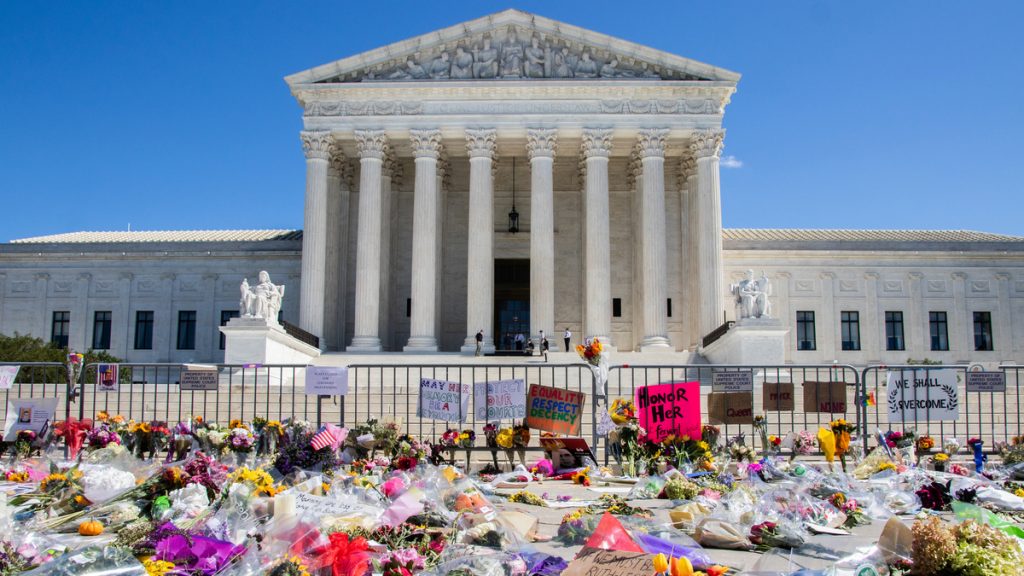 Mourners gathered in front of the Supreme Court to pay their respects to Ruth Bader Ginsburg, who died on Sept. 18, 2020. (Julia Nikhinson/The Diamondback)

Federal judges serve for life. Their unlimited tenure impacts judicial decisions for decades, which can have huge ramifications on politics, society and public policy. Shouldn’t politicians put a lot of focus on the courts and appointing judges that align with their views? The answer here is clearly yes, but the Democratic Party doesn’t seem to realize or care about the gravity of this.

Appointing federal judges is arguably the most impactful decision a president makes. Judges serve for years after a president is gone. Currently, conservative judges have a grip on the federal court system. The Supreme Court has a conservative majority of 6-3, and many judges serving on lower federal courts also skew conservative. Former President Donald Trump appointed three justices during his one term, which is the most since former President Ronald Reagan, who appointed four during his two terms in office.

Additionally, the justices Trump appointed were all under the age of 55 at the time of their appointment. According to the Pew Research Center “past justices who were appointed to the court when they were 55 or younger ended up serving for an average of nearly two decades.”

Democrats need to be more aggressive in pushing judges through the Senate, even with an uncooperative Republican Party. If the party wants to have a serious impact on legislation and policy for years to come, it cannot keep letting this issue slide. Democrats must do whatever it takes to reinstate more liberal justices and judges in the federal courts.

The ideological makeup of federal courts — specifically the Supreme Court — matters. Recently, the Supreme Court announced it will hear a case in 2022 that could potentially overturn the landmark abortion case Roe v. Wade. With a strong conservative majority that wants to restrict access to abortion, there’s a real possibility the court could overturn this precedent, which has given hundreds of people with uteruses the legal freedom to treat their bodies as they choose.

Democrats need to focus on putting in judges that will actually uphold the laws they implement. What is the point of fighting for positions in the legislative and executive branches if their work can be undone by the judicial branch? No matter how hard Democrats fight for a blue Congress and White House, if they can’t appoint and approve liberal judges, their hard work is for nothing. Take the Affordable Care Act for example  — the health care law was passed in 2010 after months of hard work and legislative compromises. Yet, the upcoming Supreme Court ruling on California v. Texas could declare a portion of the ACA unconstitutional, which may invalidate the legislation as a whole.

It may take rulings like these to get Democrats to make a change. However, instead of simply reacting when their hard-earned changes are stripped away, Democrats need to begin looking forward.

The party should also be more serious about recruiting judges and preparing a list of who could be appointed and approved. Republicans do a great job of using outside groups such as the Federalist Society for this purpose. Democrats need to rely on similar organizations.

Democrats should also push for court reform since it is already too late to make a huge impact on many of the federal judges serving. There are a few directions Democrats could go in a potential request to reform the courts. They can advocate for term limits for judges, which would decrease and balance out the huge amount of power a president has with judicial appointments.

Additionally, they can look at expanding the courts, especially the Supreme Court. In April, Democrats introduced legislation that would increase the Supreme Court from nine to 13 justices. This is certainly a step in the right direction, but it’s a bit radical for some Democrats, including the party’s most important member, President Joe Biden.

Issues such as reforming the courts and appointing judges are priorities that need to be brought up again and again until people are more comfortable with them. Major change is not made overnight, so gradual strides are needed to ultimately change this country’s judicial landscape.

Republicans have prioritized judicial appointments for years, and they have been successful in putting in conservative judges. Democrats lack this same passion and focus, and this needs to change as soon as possible.

If Democrats want their legislation and fundamental court cases protecting human rights to be maintained, they need to shift their focus and push for reform. It is one of the most important things in our government, and it is being swept aside.