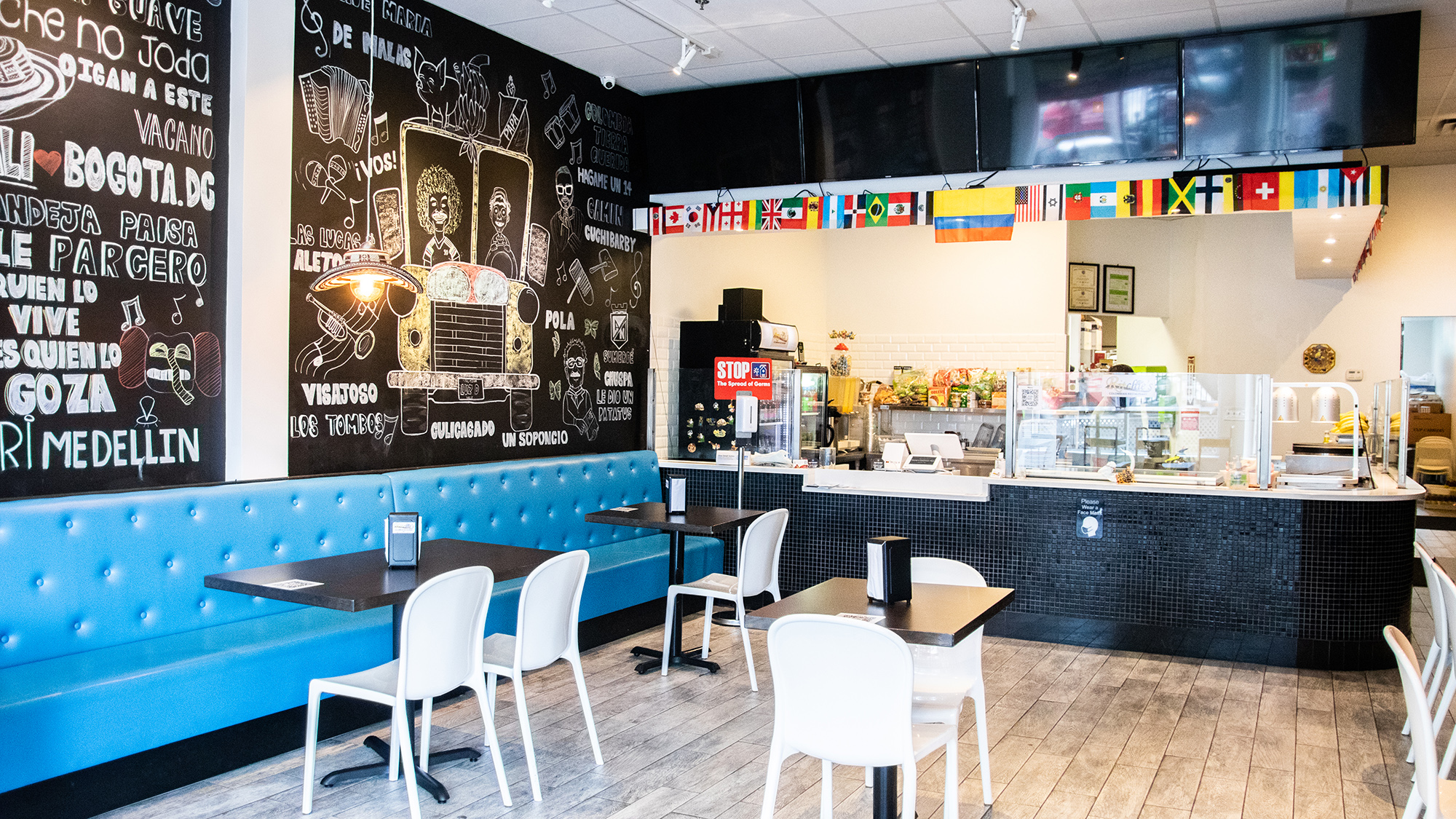 The interior of Ritchie's Colombian Restaurant on May 6, 2021. (Julia Nikhinson/The Diamondback)

Opening a Colombian restaurant has been a lifelong dream for Luz Ocampo. And with a vibrant new eatery on Route 1, it’s finally a reality.

“The truth is that I never thought I would achieve it,” she said in Spanish.

Ocampo and her husband, Ricardo Rivera, opened Ritchie’s Colombian Restaurant in September. The walls feature various sayings from different Colombian departments, which are similar to U.S. states. Cowboy hat lamps are statements around the restaurant, and Latin music is always playing throughout.

The family-owned restaurant is solely and authentically Colombian, Rivera said, and the recipes come from his wife. She cooks flavorful arepas, flour tortillas full of meat and savory meat-filled fried dough called empanadas.

“We don’t sell nothing if it’s not Colombian,” Rivera said.

The couple opened the restaurant last year after Rivera lost many customers in his construction job. The pair also had a bakery called Ritchie’s Cafe in Washington, D.C., but it was shut down due to the pandemic. The bakery sold mostly pastries, such as sweet and savory crepes and cupcakes, and also offered home-cooked Colombian cuisine on Saturdays.

With the combination of the bakery closing and Rivera’s loss of customers in his construction job, the couple opened up the Colombian restaurant in an effort to stay afloat.

“Surviving like anybody else … that’s the only reason,” Rivera said.

Ocampo has loved cooking her whole life. She learned from her grandmothers and has always looked up to the older women in her life that cooked, she said. Ocampo says she puts love into every freshly-made dish, imbuing them with Colombian authenticity. She enjoys making gourmet and specialty dishes, including the most popular dish called bandeja paisa, which consists of various meats, rice, beans, arepas and plantains.

“I cook as if it were for my family, everything is done with care,” Ocampo said in Spanish.

The pair chose to open the restaurant in College Park because they hoped that with the proximity to the university, they would get support from the student population, Rivera said.

And despite opening the restaurant in the middle of a pandemic, they have received a lot of support from the community, Ocampo said.

Jennifer Nunez found Ritchie’s online after searching for Colombian restaurants. Nunez said she would recommend Ritchie’s to others because of the food, the quality and the customer service. And, since she is from Frederick, Nunez was excited that there was a Colombian place nearby.

Everyone who eats at Ritchie’s loves the food, and the couple hasn’t heard any complaints yet, Rivera said.

In fact, Rivera said, there’s been two or three times a customer was brought the wrong food by accident and began eating it without realizing it. They enjoyed the dish so much, it became their new regular order.

In the future, the couple hopes to open a bigger location for the restaurant because they are running out of space in the kitchen, and Ocampo needs more space to add more intricate dishes to the menu, Rivera said.

In addition, Ocampo said she hopes to open up another bakery and dedicate more time to making Colombian pastries. But in the meantime, she enjoys cooking Colombian cuisine and making people happy, she said.

“We are open to the Colombian community, but not solely Colombians, but to everyone who wants to come here to eat, to enjoy themselves for a good while and to serve them the best we can,” Ocampo said in Spanish.