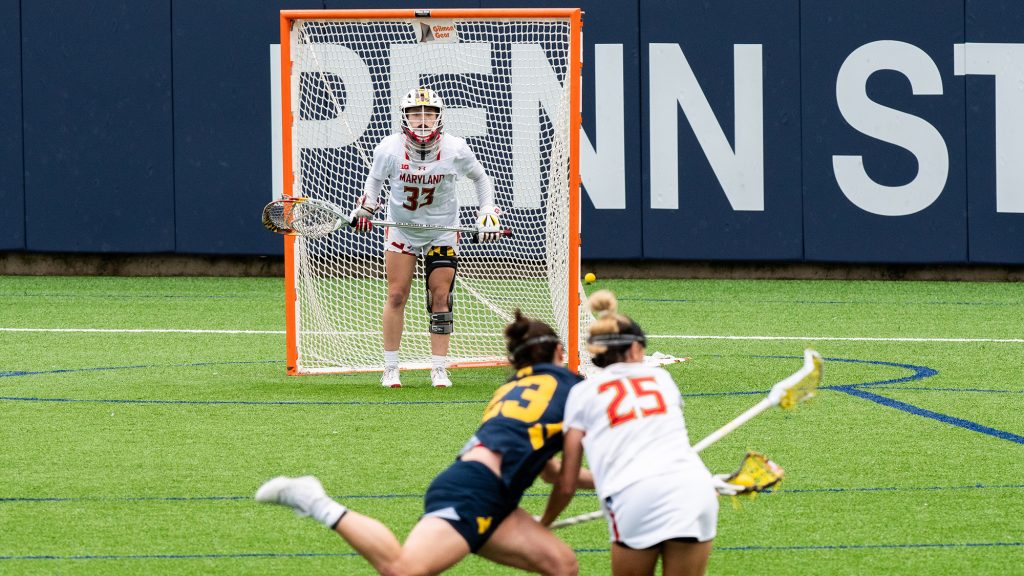 Emily Sterling sets up in net during Maryland women's lacrosse's 16-13 win over Michigan in the Big Ten tournament on April 29, 2021. (Julia Nikhinson/The Diamondback)

Before every game, each Maryland women’s lacrosse player says one thing they hope to execute on the field.

Preparing for the Big Ten championship game and the biggest stage of her collegiate career so far, goalkeeper Emily Sterling said, “I’m going to have my team’s back.”

In her first ever collegiate tournament, Sterling showed up in a big way, exuding confidence from game one and making big plays to keep her team competitive — even in an eventual title loss.

“We all commit to what we’re saying and I’m just going to have their back in whatever way I can,” Sterling said.

Youth and inexperience have been on show all season by the Terps, but against undefeated No. 2 Northwestern, Sterling and her team displayed one of their best performances across the board. Although it didn’t end in the raising of a trophy, Maryland put forth a strong effort to build on, coming with an expected NCAA tournament appearance.

Sterling has been finding her legs this year as she took over as the No. 1 choice in the cage for the Terps. Following the graduation of Megan Taylor, 2020 was a toss-up for Maddie McSally and Sterling to fight for the new opening in net.

In 2021, it’s been a different story, with Sterling taking almost every minute. Madison Hine played a half on senior night and McSally made a few appearances when things weren’t going Sterling’s way against Rutgers on April 18.

Sterling has had a mixed bag of results with a .388 career save percentage — seventh among regular starters in the Big Ten and 7.47 saves per game, fourth among the same group.

But one stat may be the most telling: She has played more games than any other keeper in the Big Ten and has the second most minutes logged between the pipes.

“She has come so far this season and you can just see her confidence throughout the entire year,” captain Brindi Griffin said. “With each game, she comes out even better and even better, which is so exciting. She’s peaking at the perfect point of this season.”

During the tournament, Sterling had particularly noticeable opening halves. She saved five of Michigan’s eight shots in the first half and then all five of Johns Hopkins’ chances on goal in the next round.

Against the Wildcats, things went differently. Northwestern boasts the No. 1 offense in the country, including the best attacker in Izzy Scane. They went 10-11 on free position shots, something coach Cathy Reese tipped her cap to in the postgame press conference.

Where Sterling was able to shine was making her presence felt in open play — something she has not consistently accomplished this season.

The highlight for the sophomore was making two big stops against Scane in the first half that saved what would have been easy goals.

After Scane ditched Lizzie Colson with a slick dodge, she only had Sterling in her way. And as her stick flew down, rocketing a shot from point-blank range, Sterling tracked it to the upper left corner of the goal and made the stop.

Ten minutes later and the game is locked at seven with a few minutes to go. Maryland needed to halt the awakening Wildcat offense.

Northwestern had numbers on the attacking end and Scane was looking to dish it over to Erin Coykendall, who was running right beside the cage.

Sterling read that pass and made a dash out of her circle with an extended stick to intervene, causing a massive turnover, squashing the Wildcat momentum for the time being.

“She came out of the cage and came up with some big plays for sure,” Reese said. “I’ve got so many first year players on the field… and they’re all out there competing for a championship against one of the best teams in the country… I was really proud of how they battled.”

She would finish the game with just five saves, but a career-high of five ground balls meant she led both teams in the hustle stat.

After the matchup, Sterling had already keyed in on what her team did right and set her sights further down the line, refreshed by the play of her team against Northwestern.

“Our confidence is at a whole new level right now,” Sterling said.

Coach Reese is never one to shy away from being upset at a loss. She hates losing, as she’ll tell anyone. But, it was easy for a smile to come across her face when she started talking about Sterling and how her squad took the fight to the Wildcats in the title game.

“We fell short, yes,” Reese said. “But there’s a lot to kind of hang on to as we move forward.”