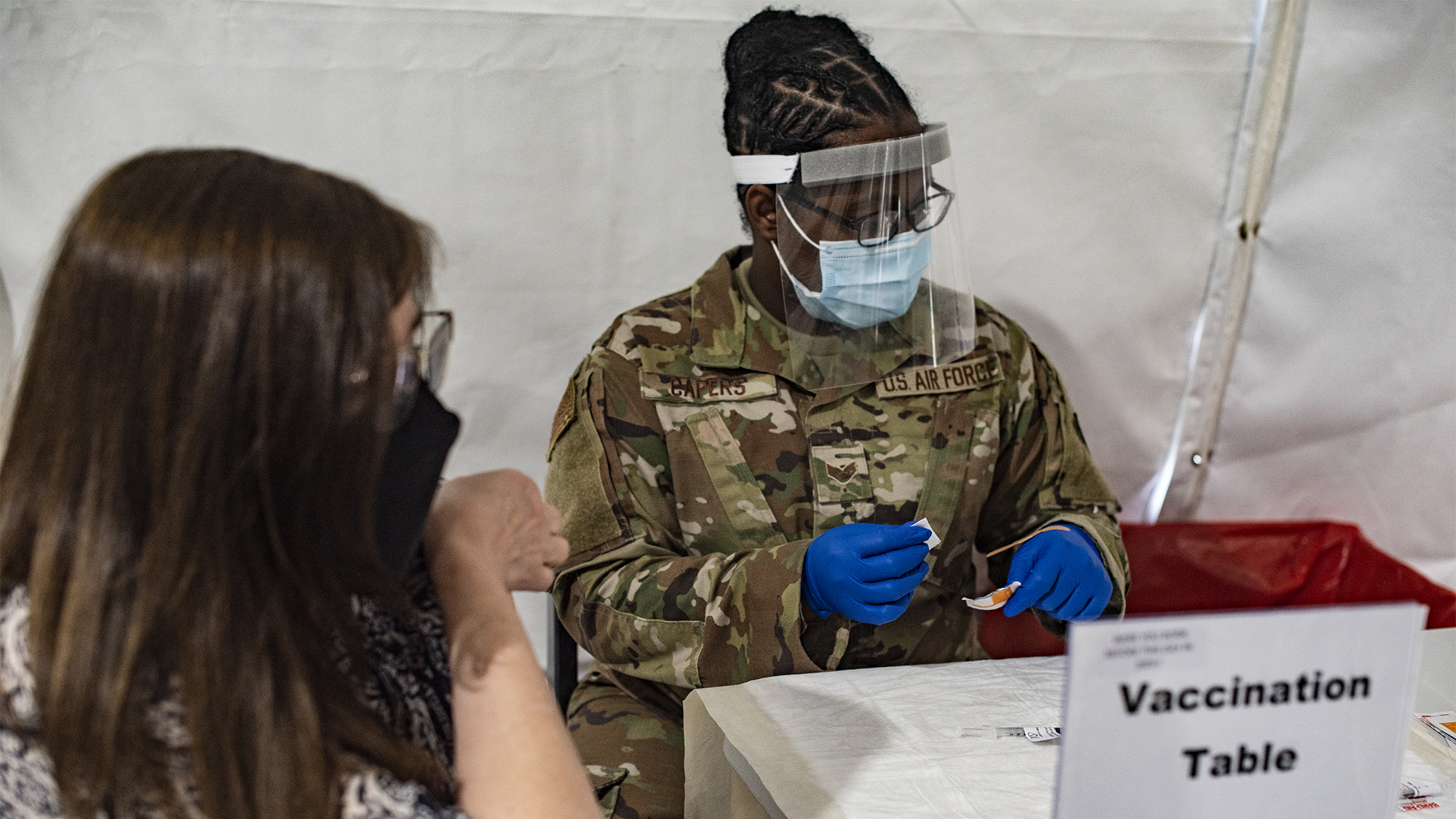 An Air Force nurse prepares an alcohol swab for a patient before they receive the Pfizer coronavirus vaccine at the FEMA-run mass vaccination site at the Greenbelt Metro Station on April 7, 2021. (Eric Harkleroad/The Diamondback)

It would be really nice if a pandemic that makes no distinction between class, race or borders, would also cause corporations to consider global cooperation for the sake of human life.

But, once again, healthcare corporations have proven that they’re not our friends by being unwilling to share resources, even in the face of the current catastrophe in India — which will likely get worse.

If you haven’t heard, India has been reporting over 300,000 cases per day, and it’s estimated many deaths are undercounted. People are dying in the streets and the country is facing a double-mutant variant that is believed to make the virus more resistant to vaccines. The irony? India is the biggest vaccine producer in the world, and they’re running out of raw materials to control the spread.

Meanwhile, Bill Gates wants to keep vaccine patents locked, even amid the current devastation in India. In World Trade Organization talks, European countries and the U.S. blocked a patent waiver aimed at the COVID-19 vaccine. The failed waiver would prevent other companies from manufacturing vaccines, effectively leaving some countries in the dust.

This all brings me to my question: why do these patents even exist? I can’t think of anything crueler than a company creating life saving medicine that could save hundreds of thousands of lives globally, and then refusing to give it to people desperately in need of it, or making it so expensive that it’s unaffordable for the vast majority.

Patents and intellectual property laws have already proven to have harmful consequences in the U.S. Insulin, which had its patent initially sold for $1, now costs upwards of $175 for newer versions. Even worse, these patents aren’t necessarily reflective of innovative strides made in medicine. Branded companies literally pay other companies to delay making generic versions of drugs.

Companies have been making incremental improvements to insulin since it was first patented, leading to its current version that remains patented. These newer versions of insulin make it seem obsolete for other pharmaceutical companies to make older, unpatented versions of insulin, so they choose not to.

What we see here is patent law and profit-oriented practices coming together in a spectacular failure to provide for people dependent on insulin to live. It’s happened with all kinds of life-saving drugs. And now, it’s happening with vaccines on a global scale. Corporations are continuing to prioritize profits over people — just as they always have.

If there’s anything that this pandemic has highlighted, it’s global inequities. At the current rate, India will only have 30 percent of its population vaccinated by the end of 2021, and resistant strains might make it even harder. The U.S. is already almost at the 30 percent benchmark, and the CDC has eased their outdoor mask guidance for vaccinated people.

The Biden administration has pledged 60 million doses of the AstraZeneca vaccine — which isn’t authorized in the U.S. —  to other countries, with the biggest share expected to go to India. That’s almost nothing for a country of nearly 1.4 billion people. Asia Russell, the executive director of Health GAP, an international AIDS treatment advocacy organization told The New York Times, 60 million doses is like “showing up to a four-alarm fire with an eyedropper full of water.”

We seem to be forgetting that this pandemic is global — without stable vaccination rates or measures to stop the spread internationally, the virus will continue to spread, and possibly mutate into less controllable versions that can easily traverse borders. Just because things are starting to get better in the U.S. doesn’t mean they can’t get worse again, especially if corporations don’t start cooperating to find more global solutions.

It is deeply unethical that corporations are able to sit on life-saving vaccines and drug formulas and watch as countries fight for doses. It is even more evil that western countries in Europe and North America will likely win this fight because of their access to resources, once again sidelining countries in the global South.

Pharmaceutical corporations need to put profits aside, especially now, as people continue to die preventable deaths. No company should have a monopoly on lives.

Shreya Vuttaluru is a sophomore government and politics and journalism major. She can be reached at shreya.vut@gmail.com.