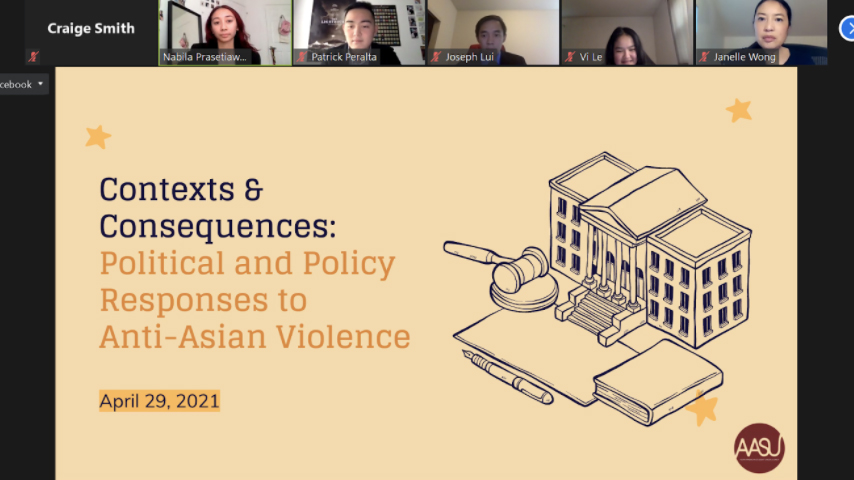 By Craige Smith
For The Diamondback

The panel, titled “Contexts and Consequences: Political and Policy Responses to Anti-Asian Violence” comes a little over a month after a gunman in Atlanta killed eight people, six being Asian American women. The panel served not only to bring awareness to Asian American struggles but to also discuss policy solutions to those issues.

The moderators both pointed to previous examples of racism that Asians have experienced in America, such as the Chinese Exclusion Act, the period when Chinese Americans were deemed the “yellow peril,” Japanese internment during WWII and anti-Sikh sentiments following the 9/11 attacks. Even during times when anti-Asian sentiments don’t dominate the mainstream narrative, they can still affect people’s lives.

Janelle Wong, an American studies and government and politics professor at this university, said that 80 percent of people felt that anti-Asian violence was increasing. Additionally, Wong said about 10 percent of Black, Latino and Asian American people, as well as Pacific Islanders and Indigenous people “have reported a hate crime in the first months of 2021.”

Other panelists included Kris Valderrama and David Moon, who are both members of the Maryland House of Delegates. Both spoke on their experiences with recent Asian hate and how they’re dealing with solutions to issues through policy.

“I’m scared…not personally for myself… but I’m scared for my children,” Del. Valderrama said. She fears that change cannot come quickly until action is taken on the federal level to prevent further discrimination, she said.

Both delegates touched on the need for bipartisan support, especially with bills regarding hate crimes and discrimination. The moderators noted that the U.S. Senate passed the COVID-19 Hate Crimes bill earlier this month, and Moon pointed out that the General Assembly has passed similar bills.

When asked about the goals of the event and what they wanted to address, moderator and junior government and politics major Patrick Peralta said, “[We hope to] change the way in which Asian Americans are perceived but also empower Asian Americans into resisting those narratives and giving themselves voice to resist that.”