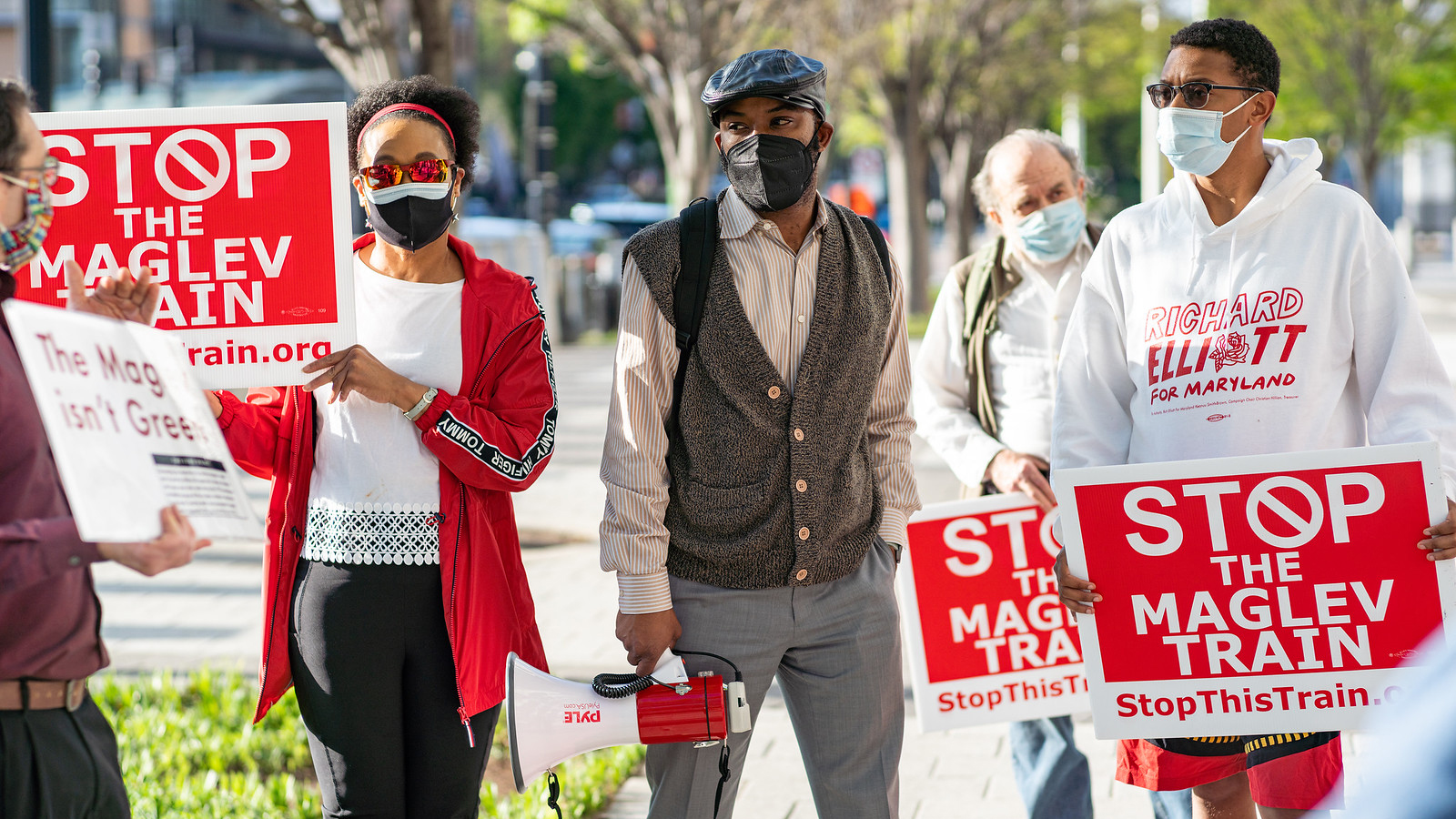 A protest against the MAGLEV train on April 13, 2021. (Photo courtesy of Richmond Forsen)

At first, I was super excited when I read the news that there was a plan for a maglev train project between Washington, D.C., and Baltimore. I mean, the trains in the Metro system are pretty convenient, but they’re ten times slower than maglevs, don’t float and just don’t give off the same Star Trek vibes.

But, as I read more about the project, I became less enthused.

Even though I strongly believe this country needs to improve its infrastructure and expand public transportation, expansion is not a one-size-fits-all solution. We need to keep in mind that every community is different and has a unique relationship with its surrounding area. It would be easy to just assume plopping any public transportation everywhere would be an improvement, but that’s simply not true. It’s important to tailor solutions to each community.

Don’t get me wrong — new public transportation and infrastructure projects like the D.C. to Baltimore maglev are the right idea in theory, as they improve efficiency and provide new economic opportunities. It would connect D.C., Baltimore and Baltimore-Washington International Airport in 15 minutes and provide 1,500 new jobs.

Even though the initial proposal will not demolish any homes, the construction environments and future noise pollution of having a maglev in the area will be consequences of this plan. For a project that would disturb local residents’ lives on such a large scale, it seems especially inconvenient that most of them won’t even use it regularly.

With an estimated $60 per ticket, I doubt the majority of residents will be able to afford to use the maglev often; one ticket would be equivalent to about six Chipotle bowls with tortillas on the side — I could eat like a queen for a week on that much money.

More seriously, a regular Amtrak ticket from D.C. to Baltimore costs $15. For those who are financially strained, like many college students, cheaper tickets around this price range give more flexibility in our lives. Tickets at $60, drawn out over weeks and months, could impact residents’ ability to patronize local establishments like stores and restaurants. For those even worse off, if that trip is needed to get to work, this difference could hurt their ability to eat or even pay rent.

Imagine having a giant chocolate cake in your house, taking up your whole dining table, attracting bugs and mice into your home, but not being able to eat a single slice.

In addition, there are already fast ways to travel between Baltimore and D.C. By car, it’s about an hour. Usually trains take around 35 minutes. On Amtrak Acela, it only takes about 20 minutes. Of course, shrinking that time to 15 minutes is an improvement, but I think it’s safe to say that shortening the trip between D.C. and Baltimore is not a pressing concern.

While public works projects should benefit all members of the public, regardless of economic status, there has been a pattern of favoring the rich over the middle and lower classes in this country. This trend is especially noticeable in public transportation — we stereotype it as a tool for the poor and disenfranchised while in other developed countries, public transportation is just as typical as using a car to get around.

This isn’t to say a maglev project is a bad investment everywhere in the U.S. — some version of this project would probably be super beneficial on routes that don’t have much public transportation, like connecting parts of the Midwest with Chicago.

For our area though, this project is just not the right fit. Although the public transportation system in our area isn’t great, it’s decent and among the better ones available to Americans.

We aren’t pressed for more public transportation the way that a high speed train would provide. Instead of a whole new system of transit, it might be more efficient to just improve the quality of existing systems.

What we could benefit from is expanding the affordable metro systems with more stops in Prince George’s County. For Amtrak and bus routes, this could mean more efficiency and making it simpler for commuters to understand how to get from one location to another.

While it’s easy to want to push for newer and more innovative systems, sometimes the flashy stuff is less helpful, unnecessary or even harmful to communities.