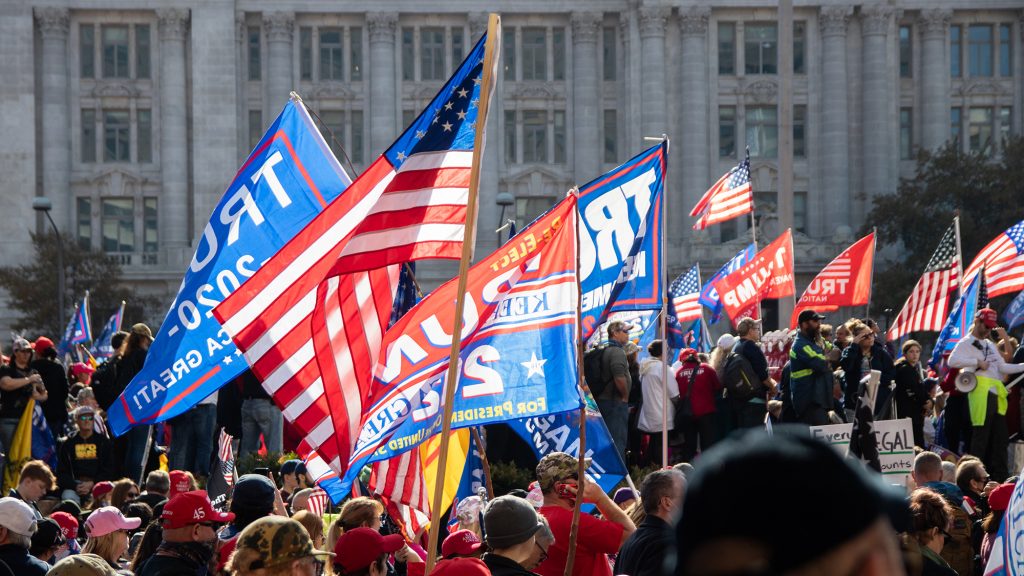 Trump supporters congregate at Freedom Plaza in Washington, D.C., prior to the Million MAGA March on Nov. 14, 2020. (Julia Nikhinson/The Diamondback)

The Republican president of the early 2000s had somewhat of a media renaissance during the Trump era, and is currently on a media tour promoting a new book. Much of the recent coverage has been puff pieces that emphasize his good humor and quirky painting hobby, as well as how he supports immigrants and bipartisan cooperation — unlike certain other Republican presidents.

Anyone with even a passing knowledge of Bush’s presidency should know how gross this rehabilitation of his image is. A man who called for gay marriage to be constitutionally banned and caused countless deaths through the wars in Afghanistan and Iraq should not be put on a pedestal. But this column is not about the failures of Bush’s presidency, it’s about the failure of the mainstream media to hold him and others like him to account.

While the media has obviously never been perfect, this specific failure seems to be one of the many fallouts from the Trump presidency. Unfortunately, it seems that as long as a president comes off slightly better than Trump, their long-term relationship with the media will be solid.

Trump is a horrible person. We all know this. The media especially knows it, as they are the ones who have catalogued all his monstrous behaviors over the years. But the flip side of documenting Trump’s horribleness has been the media giving a pass to whoever even slightly criticizes him.

They have done this with Bush, who in a recent CBS interview said with a straight face that he feels a responsibility to preserve “the dignity of the office” — an idea unchallenged by the interviewer.

They have done this with many Democrats, including our current president, and many ex-Trump officials who chose to criticize the administration after leaving it. People such as former Defense Secretary James Mattis and former White House Communications Director Anthony Scaramucci have been given dozens of op-eds and cable news appearances where they tell us things about Trump that most of us already knew.

This is the absolute wrong way to fight the rise of the far right, and does not bode well for  holding future leaders accountable.

It all goes back to Trump’s perceived violation of social and political norms. Because Trump violated political norms in such an egregious way, many Americans seem to feel nostalgic for figures who epitomized those norms, even if the results were also horrific. The media is complicit in this by giving figures such as Bush or former House Speaker John Boehner air time to push the false narrative that everything was fine before Trump came around — despite many of their disagreements with Trump being more about his style and presentation than his policy. Focusing on politicians’ supposed presentability rather than how the policies they pass affect the public is a fundamental misunderstanding of how politics should work.

This type of coverage will lower the already low standards Americans have for their elected officials. Obscuring people’s records while overly praising them for making tepid criticisms of people in power just lowers the bar of what conduct is deemed acceptable in our society, and “better than Trump” is as low a bar as can be set.

The media needs to start fulfilling its purpose: giving accurate and properly contextualized information to its audience. Giving these or any individuals air time on your network or publication is not appropriate unless you explain their history to the audience. Letting them go on about abstract concepts like “dignity” or “respect” without explaining what they did when they were in power is actively failing your audience. It’s an inconsistent application of the morals they’re trying to advocate for.

Of course people are complex, and it is not out of bounds to praise someone for positive actions, even if they are a negative force overall. But this recent coverage has tipped over into absolution and whitewashing of history. It is neither informative nor politically sound to give a pass to some politicians just because their dirty laundry stinks less than others.