Who are Tramp Stamps and why do they suck? 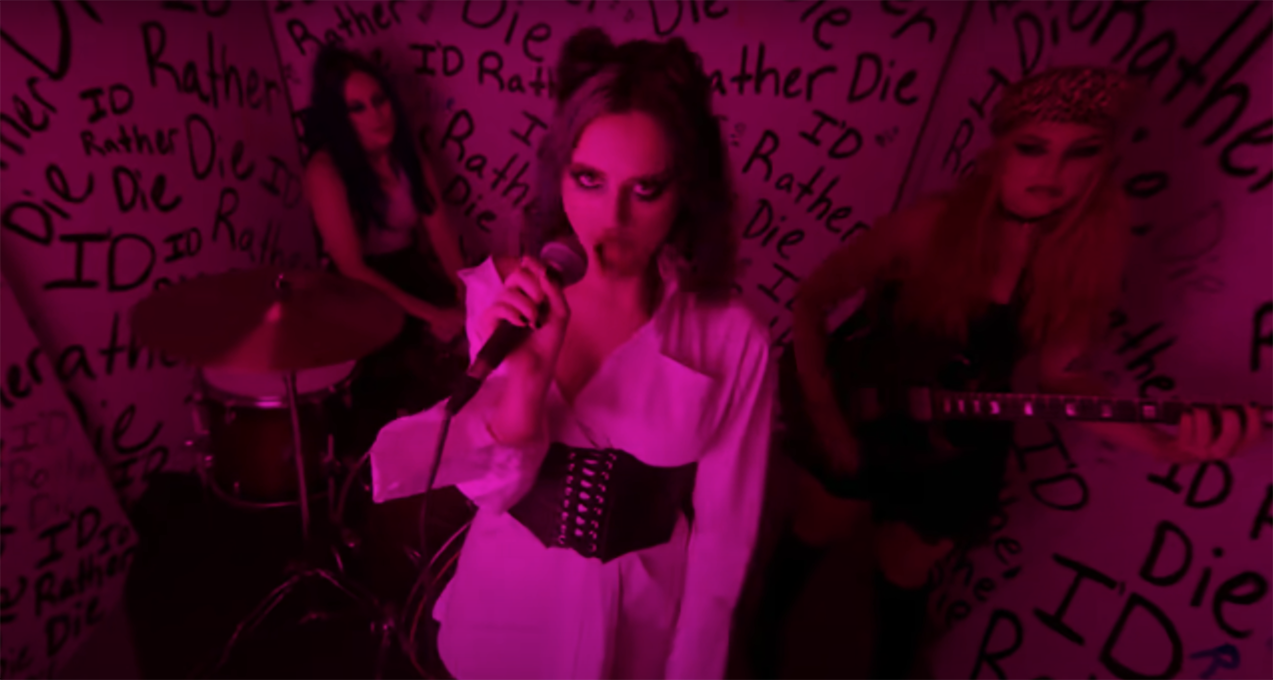 Like many people, I like to use social media to find new music. One platform that’s been particularly good at launching new artists is TikTok. One day, my “For You Page” was saturated with three punk-esque women who called themselves Tramp Stamps, singing their newest single “I’d Rather Die.”

Across the board, the song garnered mass scrutiny for its corny lyrics and weird overdone commentary on not wanting to date “straight white guys.” For the next week, all I saw was a series of videos discussing why TikTok’s latest viral superstars, Tramp Stamps, were a stain on punk’s name.

Tramp Stamps faced a series of controversies over the course of a week. To aptly show who this band is and why people hate them, here are the three main controversies that circulated the internet.

Before their latest single, I had never heard of Tramp Stamps. “I’d Rather Die” was the band’s third single, and arguably their most viral song. The band originally posted a snippet of the song on TikTok on April 9. In the now deleted video, the band was mouthing the words of the first minute of their new song as animatedly as possible. The snippet was taken down, but the original lyric video is on YouTube.

Lyrics such as, “I’d rather die than hook up with another straight white guy,” were called out, with some saying they fetishized other races and played into what people called an overplayed faux-feministic trope of hating straight white males.

The band made a response video saying: “We are not fetishizing people of color, that is not what we intended, that’s not what the song is about or supposed to be about.” They claimed instead the song is about a shared, poor sexual experience all three band members had with men who had the same name.

The relationship to punk and industry plants

Besides the lyrics, many called out the band’s aesthetic. As the internet does, users quickly discovered all three band members were wearing clothes from the infamous store Dolls Kill. Dolls Kill is a clothing retailer known for selling merchandise with an alternative aesthetic. Sounds good and fun, right? Wrong. Dolls Kill has fallen under fire for stealing designs from small artists, and their owner made questionable comments regarding the 2020 Black Lives Matter protests.

Aside from the ethical dilemma of purchasing from a controversial brand, there’s a lack of genuineness in regards to punk. Punk is not only an aesthetic choice but also an ideology. Punk ideology encourages standing up against authority and injustice. Many people who truly embody punk avoid shops like Dolls Kill, as they often support issues true punk ideology is against.

[The legacy of Vine creator and musician Adam Perkins, known for “Welcome to Chili’s!”]

After exposing the groups’ questionable fashion choices, social media users realized their punk choices were coming from a disingenuous place. This led to allegations that Tramp Stamps are an industry plant — artists backed by a major label acting as if they started from the ground up. One TikTok user pointed out how all three members have similar root growth, implying the band members all dyed their hair bold colors at the same time. Another person even called out the group’s label name, Make Tampons Free, saying they were only claiming a punk ideology to seem genuine.

Tramp Stamps should be a lesson for the music industry in social media management. After the band garnered mass attention, people started to investigate the group. Old tweets using racial slurs resurfaced from lead singer Marisa Maino. Then, people did a deep dive on drummer Paige Blue’s Instagram, where photos from her wedding — where she happened to marry a straight white guy — were found. On top of that, more old posts showed photos of some of the group members adorning a more basic and less punk aesthetic.

The band’s social media presence was only further harmed by a fake fan account. At first, people thought the group had made their own fan account and the user was blindly defending the band. People became suspicious of the account when they tweeted, “we are currently located in Tennessee” and swiftly deleted the tweet. The band is based in Nashville, Tennessee, so this caused suspicion. The account also tweeted a picture of the band with the members edited into an image of the Stonewall Riots, stating it’s what it would have looked like if the band were there. People eventually found out the account was fake, but the damage was done.

The band has recently made a statement on social media regarding all of the aforementioned controversies. The group vehemently denied accusations of the industry plant and skated on the issue of their connection to punk as well as Maino’s old tweets.

As of now, Tramp Stamps seems to have no plans to slow down. My advice, if you are looking for a riot girl or punk band to support, there are plenty out there who have their aesthetic and ideologies in the right place. It is apparent that Tramp Stamps has some image building they need to work on.