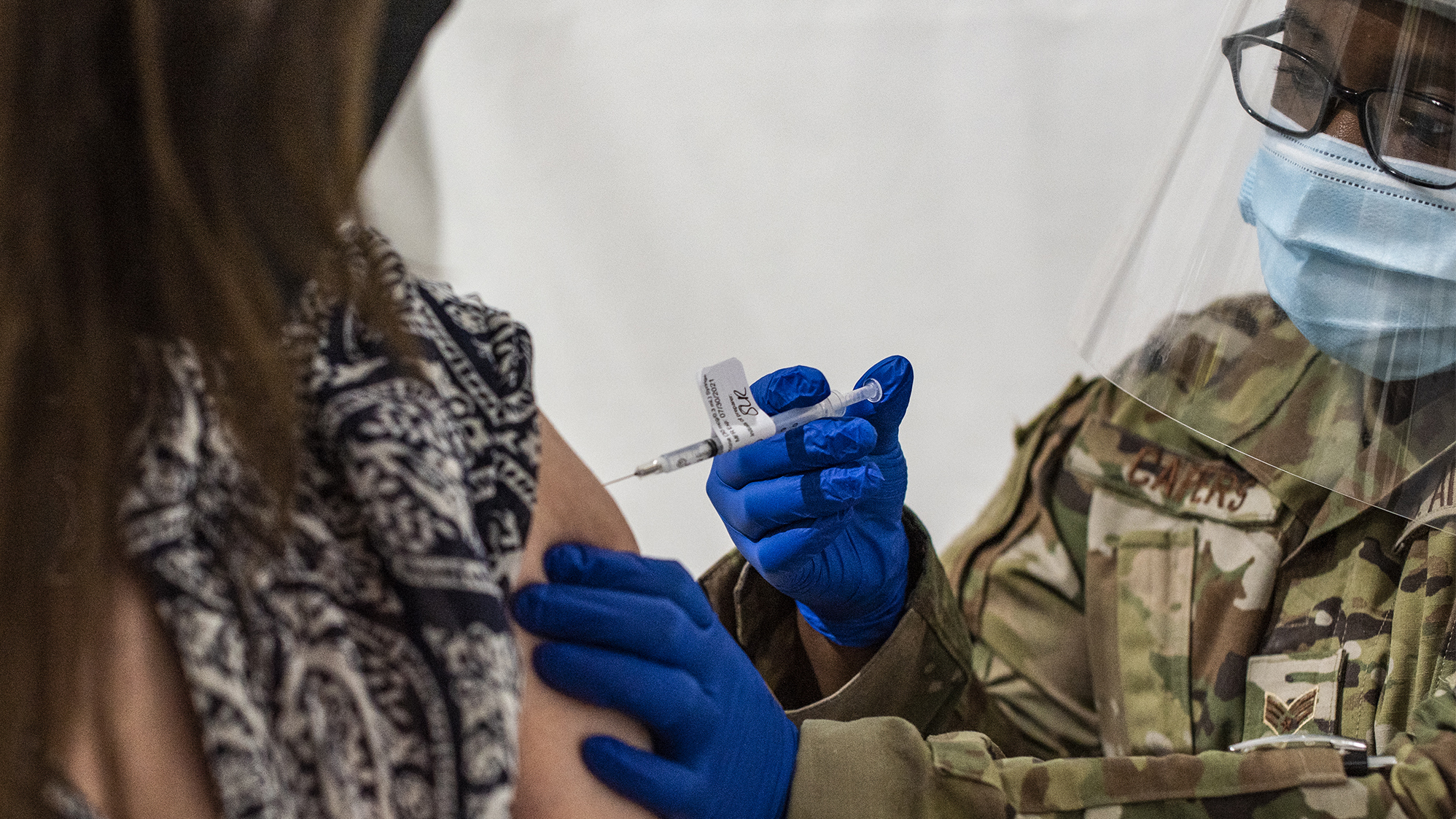 A patient receives the Pfizer coronavirus vaccine at the mass vaccination site at the Greenbelt Metro station on April 7, 2021. (Eric Harkleroad/The Diamondback)

The University System of Maryland can likely mandate COVID-19 vaccinations as long as it can provide evidence that a vaccine mandate is critical to public health and safety and it includes medical and religious accommodations, according to a letter from the state’s attorney general’s office released by Sen. Jim Rosapepe (D-Prince George’s) on Friday.

The guidance comes as colleges across the country are announcing COVID-19 vaccination mandates. Rutgers was among the first universities to require the vaccination in late March. Since then, an increasing number of universities — including Syracuse, Northeastern, Brown and Cornell — have made similar announcements.

The system, which governs 12 state universities including the University of Maryland, has not made a decision on any vaccination requirements in the fall, according to a statement provided to The Diamondback by system spokesperson Mike Lurie.

“The University System of Maryland continues to review all the issues associated with a return to campus in the fall and the measures it will undertake to maintain the health and safety of our campus communities,” the statement read.

Students at this university are not currently required to get the COVID-19 vaccine, but University Health Center Director Dr. Spyridon Marinopoulos wrote that the university “strongly encourages” campus community members to get vaccinated as soon as possible in an email Thursday. The university began vaccinating faculty, staff and students on the campus at the Samuel Riggs IV Alumni Center this week.

Rosapepe requested the guidance after constituents voiced questions about vaccination requirements. Though the senator said it’s not up to him, he said that he thinks there will be a mandate.

“We can’t go to kindergarten in Maryland without getting vaccinations,” he said. “The notion of mandatory vaccinations to protect yourself and the people you work with or go to school with is pretty set in law, but there are some … questions about whether that’s possible in this situation.”

Kathleen Hoke, who directs the Network for Public Health Law Eastern Region, said that the university system can soundly and legally implement a vaccine mandate, so long as it is narrow enough and includes some accommodations.

While some have voiced concern about the limits that surround the Food and Drug Administration’s emergency use authorization of the vaccines, Hoke explained that it should not interfere with the ability to mandate the COVID-19 vaccine.

Instead, the university system’s ability to mandate a vaccination rests on whether a decision to mandate the vaccine was tailored to the threat of the coronavirus pandemic. Hoke emphasized the scientific evidence of the vaccine’s efficacy and safety, even if the vaccines are not yet covered under a permanent license, called a Biologics License Application.

Evidence suggests that the vaccines will be granted a BLA within the next several months, wrote Sandra Benson Brantley, counsel to the General Assembly, in the letter to Rosapepe.

There’s a documented history of courts upholding mandatory vaccination, according to the letter. In Jacobson v. Massachusetts, the Supreme Court upheld a smallpox vaccination mandate in 1905. Later, in Zucht v. King, the court also upheld mandatory vaccinations in public and private schools in 1922.

Decades later, in 1944, the Supreme Court once again upheld mandatory vaccination in Prince v. Massachusetts, opining that religious freedom does not include the “liberty to expose the community or the child to communicable disease,” as referenced in the letter.

But Hoke added that an overturn of this ruling isn’t out of the question, given the current justices sitting on the Supreme Court. The Trump administration appointed three conservative justices, including Amy Coney Barrett.

But universities in other states across the country might encounter other factors beyond this constitutional inquiry.

In Florida, for example, Republican Gov. Ron DeSantis issued an executive order banning businesses and government agencies from mandating COVID-19 vaccines a day after Nova Southeastern University announced that it would do just that. Other states might also encounter pushback in the state legislature.

Del. Nick Charles (D-Prince George’s) introduced a bill in the Maryland General Assembly earlier this year that would have barred employers from mandating vaccination among employers, but the bill died in committee.

Hoke doesn’t expect pushback against a vaccine mandate from the Maryland General Assembly, especially because the legislative session ends Monday.

But opposition from Gov. Larry Hogan could be possible, Hoke said, pointing to the contrast between Hogan’s initial mask mandate coupled with the pace at which he’s reopened the state.

“The governor is more of a wildcard to me,” Hoke said.