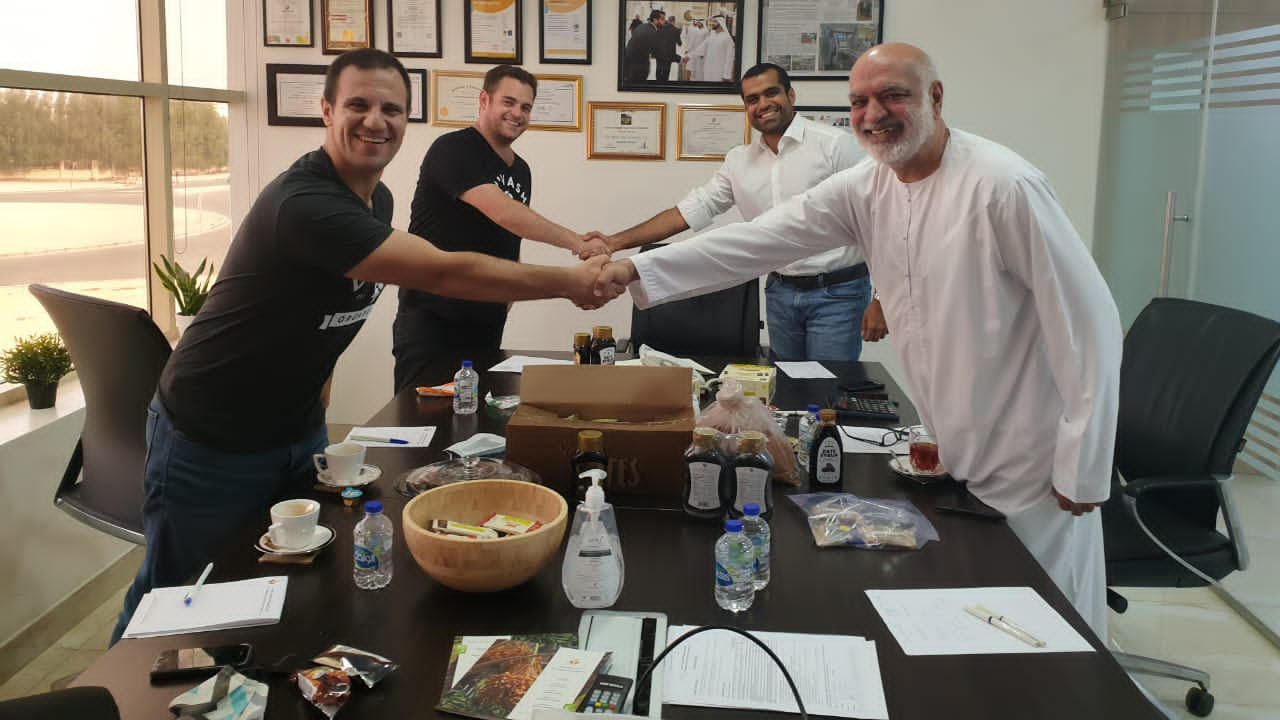 David Czinn and Brian Finkel of D'vash Organics shake on a deal with the Founder and Managing Director of Al Barakah Dates. (Photo courtesy Mubarak Taj)

By James Cirrone
For The Diamondback

In 2016, University of Maryland alumnus David Czinn co-founded D’vash Organics, a health food company with products sold in select stores of companies such as Costco, Walmart and Whole Foods.

When the pandemic hit, many businesses hit a wall trying to remain afloat — but not Czinn’s. D’vash Organics is not only surviving the pandemic, it is prospering.

D’vash Organics sells date syrup, a staple of Middle Eastern cuisine and a substitute for honey, to American consumers.

Czinn, D’vash Organics’ president, believes dates are a superfood with their high levels of potassium, fiber and antioxidants, and he claims one major benefit is that date syrup has 25 percent less sugar per serving than honey. He also touts the sustainability of dates and date syrup.

“One of the biggest benefits of using date syrup, as opposed to honey is that we use the ugly dates in order to reduce food waste,” Czinn said. “With a lot of the honeybees dying, especially with a lot of the pesticides used, this is really a great alternative.”

D’vash sells its products in over 5,000 stores in the U.S., according to a company press release. And as recently as February, D’vash inked a deal with a Dubai-based company, Al Barakah Dates Factory, one of the largest date product manufacturers in the world.

“It’s a beautiful thing when all different cultures come together,” Czinn said. “We now have access to our own supply chains, our own manufacturing facility, and it’s really going to allow us to bring D’vash to the world.”

The idea to sell date syrup in America came from D’vash Organics CEO Brian Finkel. In the 2005-2006 school year, Finkel and Czinn took a gap year after they graduated from high school and met in Jerusalem while studying at a religious seminary.

“David and I became very close friends,” Finkel said. “During that year, we bonded over our mutual passion for Middle Eastern cuisine.”

In 2013, when Finkel moved to Israel with his family, he had a “eureka moment” one day.

He was using date syrup nearly all the time — on pancakes, yogurt, as a salad dressing and as a marinade. He remarked that in every Israeli supermarket, there were “20 different brands” of date syrup on the shelves; yet in the U.S., nobody really used it. Finkel saw an opportunity and called Czinn, who was already working in the food industry as the founder and CEO of Fruigees Organic Fruit Snacks.

The relationships Czinn fostered during his tenure as CEO of Fruigees was critical to the eventual success of D’vash Organics, Finkel said.

“He leveraged his experience and his network in the food industry that he built through his other company to sort of fast track our company into the retail market in the U.S.,” Finkel said.

And before Czinn was shaking hands with established food industrialists, he started at this university as a finance major, graduating in 2010. One of his professors, Dr. James V. Green, commented on some of Czinn’s qualities that made him successful as an entrepreneur.

Michael Rosenberg, a friend Czinn made at this university, echoed Dr. Green’s sentiments about Czinn’s passion for trying new things when it came to business.

Rosenberg, now an investment banker, viewed Czinn “like a brother” in college and spoke fondly about the times he’d stay up into the wee hours of the night discussing Czinn’s various business plans.

Czinn’s advice to aspiring entrepreneurs is that they should love what they do, but should also dig into the numbers to ensure their business will actually become profitable at some point.

“I think too many entrepreneurs get too caught up in, ‘Oh this is their baby,’” Czinn said. “Be mindful of your finances…make sure you have a real path to profitability.”