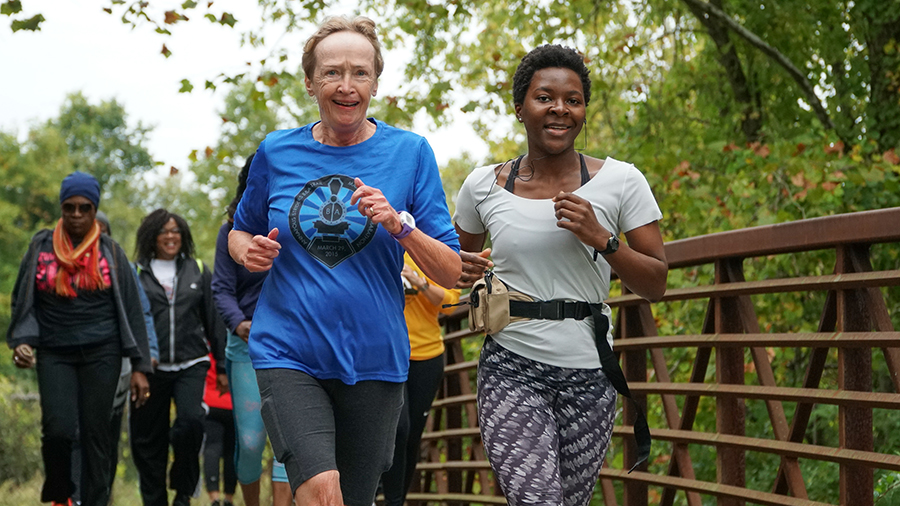 Every Saturday, members of the College Park community participate in a 5K run with this city’s parkrun program.

In pre-pandemic times, this event took place in-person, but over the past year, the weekly event’s structure has changed.

That hasn’t deterred the community, though.

It took six weeks of the pandemic shutdown for College Park parkrun’s leaders to realize that people needed the program, said Andrea Zukowski, who founded and leads the weekly event in College Park with her husband Colin Phillips.

“We wanted to ensure we were keeping people connected as much as we could, despite the challenges of being apart,” Phillips said. “We feel like it has been much more successful than we would have expected.”

College Park’s branch of parkrun, a global program, is currently operating virtually. People can participate by running from wherever they are in the U.S. and all over the world.

Even though the program’s usual distance for people to run or walk is five kilometers, people have the freedom to run as little or as much as they want at whatever time of day works for them, Phillips said. The flexibility of the running event is what keeps people coming back, he added.

Despite adjustments to the program, almost 200 participants stay connected through the program each week. Parkrun’s online presence, some of which was established even before the pandemic, has become vital to its existence.

Parkrun participants report their weekly activities on the parkrun website, where they can publicly share their experiences and photos of their running.

The program has been releasing online reports since before the pandemic, highlighting the running experiences of participants and detailing statistics of their runs, among other news.

There are more people participating in the virtual parkruns regularly than the in-person events, and communication within the program relies on email and social media.

“It’s fun,” Phillips said. “But … that takes up most of my weekends these days.”

Carly Maas, a first-year geology doctoral student at this university, has been a parkrun participant since September, saying she was attracted to the noncompetitive nature of the virtual runs.

“I decided I just wanted to run for fun and as a way to meditate and give me purposeful time away from my phone and my responsibilities,” Maas said.

Maas’ mother, who lives in North Carolina, is also a parkrunner, she said, and so is her father.

Hannah Russell, who graduated from this university in 2017, learned about the parkruns from a poster in this university’s health center in January 2017.

Russell now lives in D.C., but still participates in the runs because she does not have to get up early or go to College Park.

Russell has helped write the weekly parkrun story reports since July, and she likes to hear the running experiences of people from abroad — such as the person in Italy who sends their results weekly.

While the absence of the in-person run has been different, there are some aspects of virtual parkrun that the organization might want to continue, Zukowski said.

“There are certain things that we don’t want to lose,” Zukowski said. “We haven’t thought too much yet about how we’re gonna keep them.”

With in-person runs, people can physically come together and the organization of information is easier, Phillips said. But in a virtual environment, people from outside of College Park can participate in the city’s parkrun as well, he said.

“We totally want to find ways in which we can allow people to continue connecting with the community,” Phillips said.