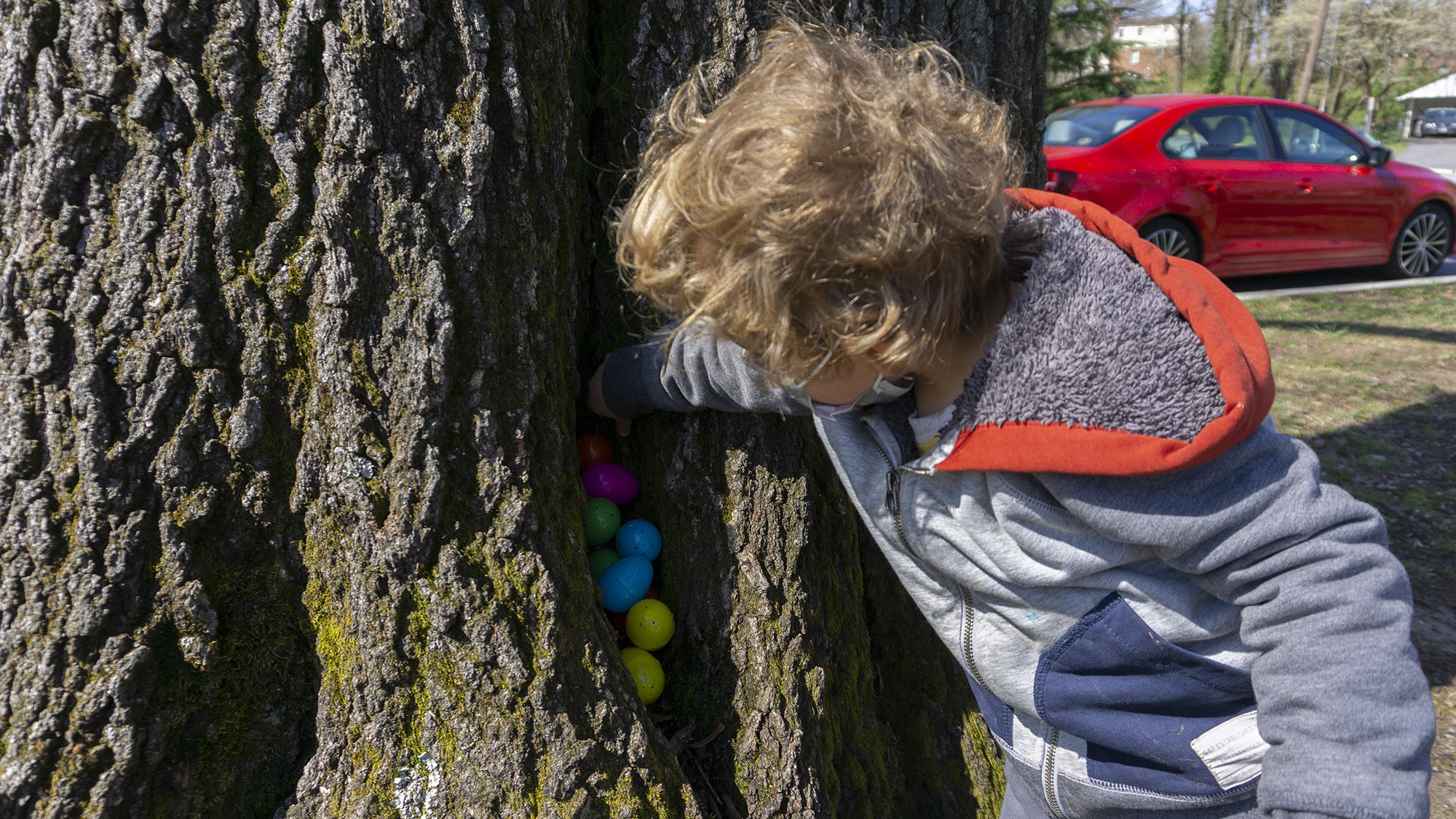 Colin Scotti, age 3, hides his Easter eggs in the trunk of a tree in Berwyn Neighborhood Park after an egg hunt on April 3, 2021. (Taneen Momeni/The Diamondback)

With the Easter holiday returning for a second round amid the pandemic, members of the Berwyn District found a way to combat isolation, hosting a socially distanced egg hunt Saturday morning.

The pandemic prevented the city of College Park from doing its own spring event this year, so the Berwyn community — which is located within the city — found a way to do it on their own.

The event was held by the Berwyn District Civic Association starting at 10 a.m. with COVID-19 precautions in place that ensured children could have fun while staying safe. No registration or payment was needed to attend the event.

Patricia Conner, a College Park resident, said she enjoyed how age appropriate the egg hunt was.

For the event, Berwyn Neighborhood Park was divided into four zones to ensure there wouldn’t be too many children in one area, said Mary Najmi, BDCA’s social committee chair.

Kids were placed into groups divided by age, with the first group consisting of children ages two and under, and going up to ages seven and above, Najmi said.

These precautions, along with requiring all people who were ages two and older to wear a mask, were made to ensure the safety of the egg hunt.

“It’s something that we thought was a relatively safe activity since it is outside and we can require the masks and everything,” Najmi said. “It’s still an opportunity to bring the community together.”

“Especially in this time when we are challenged in many ways, we need each other,” Keating said. “It’s just important to get people to know each other so that if anybody needs help then we can be aware of it.”

Event volunteers placed flags, hid eggs, worked a prize table, cleaned up the park after the hunt and helped instruct participants on where they could be in order to combat overcrowding, Najmi said.

And among the regular Easter eggs hidden in the park, there were also chances for bigger prizes.

Six golden eggs were spread throughout the park, which was divided based on the kids in each group. If a child found a golden egg, Najmi said, they could bring it to the prize table and trade it for a bigger reward.

With all of the prizes available to the kids and safety precautions in place, some attending adults enjoyed the festivities along with their children.

The event had a turnout of about 20 children, which was the exact number that was expected, Keating said.

“It was really great,” Shutikova said. “It’s for kids to meet each other and for adults to have better connections.”