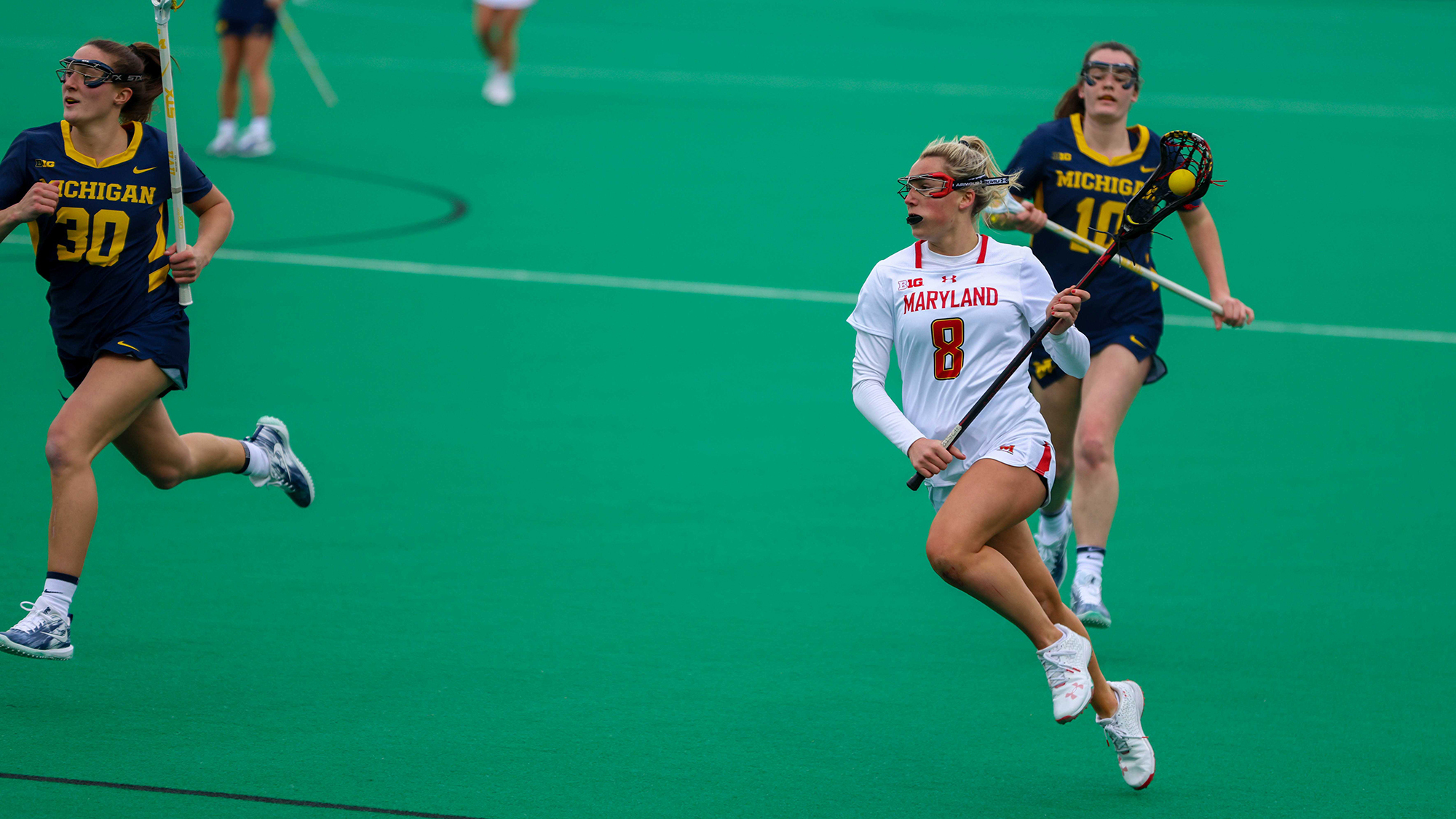 In its first game against Northwestern last Saturday, Maryland women’s lacrosse struggled to stop scoring runs from the dynamic Wildcat offense en route to a 25-12 loss.

Facing down a 5-0 run by Northwestern in the early stages of the second half, the Terps needed to make a stop to try and capitalize on the strong opening half they put together.

What proceeded was a dominant stretch for the Wildcats, as they built a massive lead on the way to a 20-10 victory and leaving Maryland winless for the weekend.

The No. 9 Terps were outscored 45-22 in the series as No. 3 Northwestern took complete control of the Big Ten, staying undefeated on the year.

Maryland had a promising start after such a rough outing on Saturday, but after stifling the top attacking options for the Wildcats during the opening period, they finally found an opening in the second half and took control.

Sammy Mueller was a problem for the Terps in the first half, putting the finishing touches on a hat trick just over five minutes into the opening period.

She was able to convert on a free position and weave her way through the Maryland defense on two more goals in quick succession.

Leubecker got back into scoring form, taking a nice feed in from Catie May and slotting the ball in between the legs of keeper Madison Doucette.

The real difference-maker for the attack was taking advantage of turnovers. In the first half, the Wildcats amassed 13 turnovers, eight of which were caused by the Terps.

Leubecker was among the beneficiaries, capitalizing on a turnover from Lauren Gilbert, scoring her second goal on a high set up from Grace Griffin that she slammed down past Doucette.

And it got better for the Terps. Griffin knotted the game going into the first media timeout, faking out her defender and scoring — continuing her strong play on both ends of the field.

But, it all started off of a big save from Emily Sterling, who blocked a lowball from Izzy Scane.

After a rough outing for Sterling on Saturday, letting by 22 goals and being pulled in the latter stages of the second half, she made a good adjustment and was able to halt much of the Northwestern offense in the opening half.

Scane and Lauren Gilbert, the first and third best scorers in the country, were held scoreless in the first half.

Lindsey McKone stopped the Terps from taking control too quickly, weaving her way in front of Sterling for an easy finish. But Griffin locked things back up with her own run on the inside, side stepping a defender to score her second of the day — tying the game at 4-4.

Then, Shaylan Ahearn was able to accomplish one of the toughest feats in women’s lacrosse —  taking the ball from Scane.

And then she did one better, scoring the go-ahead goal on the other end, giving Maryland its first lead of the weekend.

Northwestern put together a strong closing effort to the first half, scoring three goals in the final five minutes, including an incredible over-the-shoulder shot from Erin Coykendall with just one second remaining in the period.

The goal from Coykendall tied the affair at seven at halftime.

Out of the locker rooms, neither team wanted to give an inch, trading turnovers and tough attempts at goal.

It was Scane who broke the dead-lock five minutes into the period, getting her first goal of the matchup, quickly followed by one from Brennan Dwyer, putting the Wildcats back in control.

Northwestern continued its run as Mueller got her fourth, quickly followed by the first goal of the afternoon from Gilbert. A 5-0 run put Maryland down 11-7 at the first media timeout of the half.

Things didn’t get better for the Terps, as the Wildcats’ sheer amount of goalscoring options overwhelmed them, just as they had on Saturday.

The end of the run came from Maryland’s top scorer in Leubecker, who took a May pass across the face of the cage and finished in the past the keeper. But by then, Northwestern had corralled a nine goal lead from the 11-0 run.

Libby May and Leubecker each tacked one more on their stat sheets, but Scane’s five second half goals kept the Terps at arms’ reach for the remainder of the contest as Maryland dropped another game to the Big Ten leading Wildcats.