Counterterrorism is rooted in white supremacy. It will always put the racist state first. 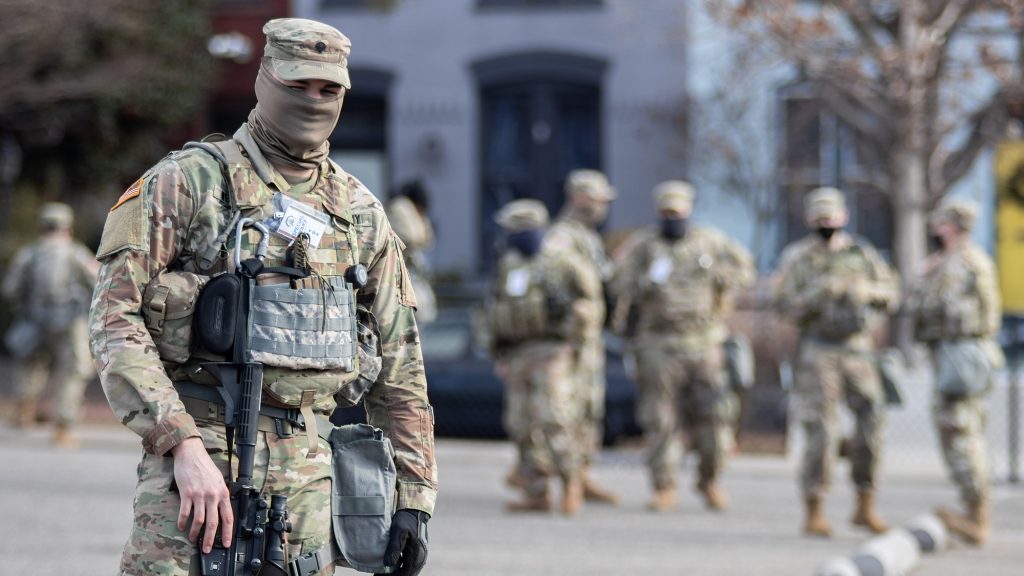 Members of the National Guard keep watch outside the U.S. Capitol building in Washington, D.C. on Jan. 17, 2021. (Julia Nikhinson/The Diamondback)

In the wake of a white gunman accused of targeting massage parlors in the Atlanta, Georgia, area and killing eight people — including six Asian-American women — police have refused to immediately designate the attacks as hate crimes. The authorities’ response to these horrifying murders is outrageous. It perpetuates the erasure of anti-Asian hate and of white supremacist violence as nothing more than the consequence of “a really bad day.” As a result of the justified anger at this erasure, some people are calling for white supremacist attacks such as this to be labeled as terrorist attacks and for the government to enhance its counterterrorism measures to target white supremacy.

Though these sentiments, especially when they come from those directly affected, are incredibly valid, pushing for increased counterterrorism measures to target white supremacists will never adequately protect those most vulnerable to these attacks. This is because counterterrorism measures and apparatuses are born from a system that will always be disproportionately leveled against marginalized communities. Instead of pushing for a racially unjust system to punish the white supremacist violence it thrives upon, we need to take the lead from abolitionist organizers, including Asian American and Pacific Islander organizers, and pursue justice and safety outside the confines of the state.

In “Terror and Abolition,” Atiya Husain, a professor of sociology and American studies at the University of Richmond, notes that since the 1960s, the United States has disproportionately leveled the label of “terrorism” against anticolonial, anticapitalist and antiracist movements at home and abroad to justify massive state repression against marginalized communities. After 9/11, the term “terrorist” was altered to fit a new mold — that of Muslim and Arab Americans.

This redefining of the label “terrorist” in the aftermath of 9/11 framed the threat to the United States as an external threat primarily brought upon by immigration of Arab and Muslim people into the United States. As a result, the U.S. Department of Homeland Security and Immigration and Customs Enforcement were created to target and surveil immigrant communities who were racialized as the enemy. To this day, these agencies continue to perpetuate rampant abuse of adult and child migrants, as well as degrading surveillance and racial profiling tactics in marginalized communities. Asian Americans are among those harmed by the effects of these counterterrorism measures; currently, 1 out of 7 Asian Americans are undocumented, and Asian Americans are among one of the fastest growing undocumented demographics in the U.S. With this in mind, expanding the power of racially biased “counterterrorism” agencies such as DHS and ICE cannot guarantee any results other than more targeting of these same communities.

Of course, it is necessary to consider that maybe, if we expand the label of “terrorism” and divert more resources to preventing and investigating white supremacist attacks, we can detatch the label of “terrorism” from its racist origins. The problem with this view is that, as mentioned earlier, the very mechanisms of the state that we use to prevent, investigate and prosecute terrorism and crime are fundamentally white supremacist. These systems thrive upon racialized definitions of terrorism, and if they aren’t dismantled and replaced with abolitionist frameworks, the word “terrorism” will never lose its racialized significance.

In a video she posted to her Instagram, Michelle Kim, a writer and critic who does diversity and inclusion work, argues that though calls for expanding state power to go after white supremacist terrorism are understandable, her community and other marginalized communities will never receive justice from a state that targets them and denies their humanity. “We continue to expect justice from a system that does not see us as human,” she said.

We can see Kim’s argument unfold when law enforcement downplayed the March 16 shootings as “a really bad day” for the shooter, and when many massage parlor workers have responded to these killings by saying more police will just bring more violence and stigmatization. On a national level, Kim’s words ring true when we examine a study by the Brennan Center for Justice that found that our government currently has enough resources to go after white supremacist terrorism but chooses not to use these resources for that purpose.

Clearly, no matter how many are killed by white supremacists, our bloated prison-industrial system refuses to cripple the white supremacy upon which it thrives. The problem with ending white supremacy through the state therefore isn’t a lack of resources, but that the state will always direct those resources to agencies and measures that uphold white supremacy. It is thus incredibly important that we listen to and support abolitionist organizers, including AAPI organizations, so we can build solidarity and safety outside of systems that perpetuate harm against vulnerable people. When we realize that the systems set up to “protect us” are really set up to protect white supremacy, we have the power to not only demand better, but also to keep each other safe.