Maryland field hockey gets past Indiana, 3-1 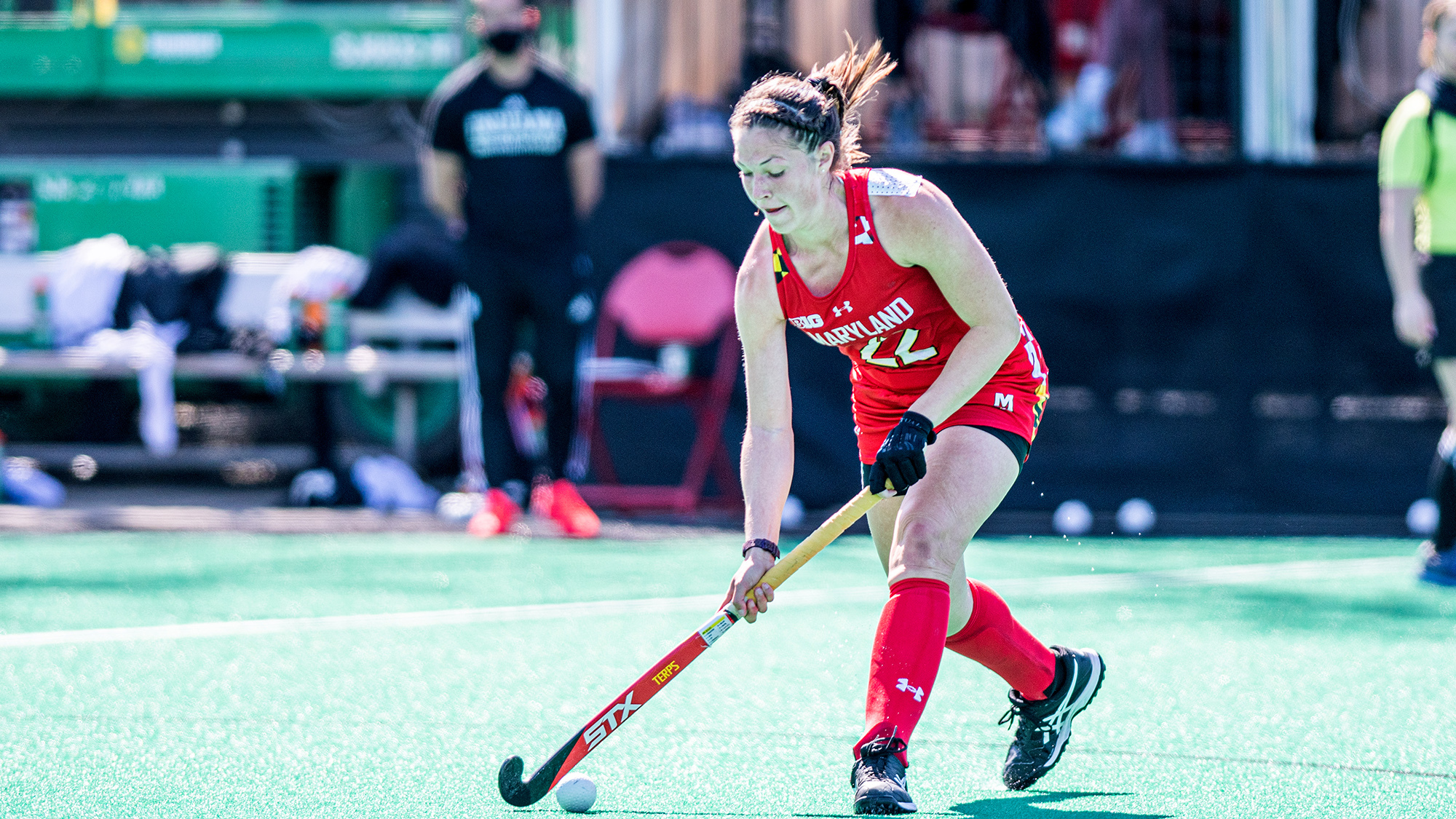 Taylor Mason raised her right arm into the air and leaped in celebration. The junior’s teammates came over to high-five and hug her, as she’d just netted a goal that put No. 10 Maryland field hockey back on top.

The Terps had found themselves locked in a 1-1 battle with Indiana late in the third period. Mason’s goal was the breakthrough Maryland needed. And it didn’t look back, closing out the weekend series with a 3-1 win over the Hoosiers Sunday morning.

The Hoosiers drew just one penalty corner all match. Meanwhile, the Terps racked up nine, including four in a row during a stretch in the third period.

“We said from the first half to the second half that we wanted to get more corners because it’s a great outcome,” defender Riley Donnelly said. “So we were happy to get more, now we need to finish more of those corners, as well.”

After Indiana (0-8) held Maryland (5-3) scoreless for most of the first period in Friday’s contest, the Hoosiers’ defense kept the Terps from taking a shot for the first 12 minutes. And Indiana’s attack was able to cut through Maryland’s strong defense; Mary Kate Kesler fired off a shot before the Terps could even make an attempt getting one past Hoosiers goalkeeper Shannon McNally.

Just like Friday, Maryland’s offense looked like it may have been coming to life in the waning minutes of the opening period. But a Bibi Donraadt shot couldn’t find the back of the cage.

As the Terps’ attack started to pressure the Indiana defense, Maryland began to show more aggression, as well. Emma DeBerdine drew a green card late in the first.

“Your mentality and your presence when you step on that court or step on the field typically dominates and dictates the energy and the pace,” coach Missy Meharg said. “Maryland can do better with that. And we will.”

It took over 21 minutes for either team to earn a penalty corner. But when the Terps got their chance, they capitalized.

Donraadt inserted the ball to Maura Verleg, who set up a Riley Donnelly blast toward the cage. McNally anticipated a drag and fell to the pitch, but the junior launched a line drive shot through the air and straight into the upper-middle part of the cage.

And for the fourth time of the season, Donnelly — a defender who has been a recipient of the Big Ten’s Offensive Player of the Week honor — was on the board.

But Indiana wasn’t done pressuring Frost, and soon after earned a penalty corner. Off the insertion, Kesler fired a drag flick past Frost. And for the first time all weekend, the sparse Hoosiers crowd on the right side of the Field Hockey and Lacrosse Complex’s bleachers erupted in cheers.

The Hoosiers left the pitch for halftime excitedly, as they were also outshooting the Terps, 5-3.

Over a period of about 20 seconds, the Terps drew four straight penalty corners. They took a total of five shots off these corners — two from Donnelly, one from Mason, one from Anna Castaldo and one from Verleg. But none got past McNally.

[Maryland field hockey slots in at No. 10 in first NFHCA poll of the season]

But late in the third period, Maryland finally gave its crowd something to cheer about. Emma DeBerdine fed Mason the ball, and the junior midfielder rattled one into the cage.

And they weren’t done.

After drawing another corner, Donnelly buried the shot. The Doylestown, Pennsylvania, native had her second score of the day, and Maryland took a 3-1 lead entering the final 15 minutes.

“Our execution on inserts … wasn’t the most accurate today,” Meharg said. “Riley and the women every day were getting better and better in training, and we’ve started to, at least on Friday and today, we’re scoring on penalty corners.”

Roughly four minutes into the fourth, Indiana thought it had one of its most promising looks of the day. Gwiazdzinski dashed downfield, a step ahead of her defender. The Hoosiers contingent started to get excited, as it looked like the freshman was going to drift downfield for a shot with only Frost in front of her.

But a foul before she could even take a shot quickly handed the ball back to Maryland, which marched back downfield and drew its eighth penalty corner of the match.

The shot missed, but the Terps weren’t done earning corners. Moments later, Brooke DeBerdine was on the endline triggering the ball to Donnelly, who let Verleg have the shot. But as the freshman inched toward the cage, the Hoosiers took it away and drove back upfield.

But nothing worked for Indiana, which suffered its eighth consecutive defeat to open this season.

“The energy is contagious,” Donnelly said. “It’s important for every single person to bring it.”