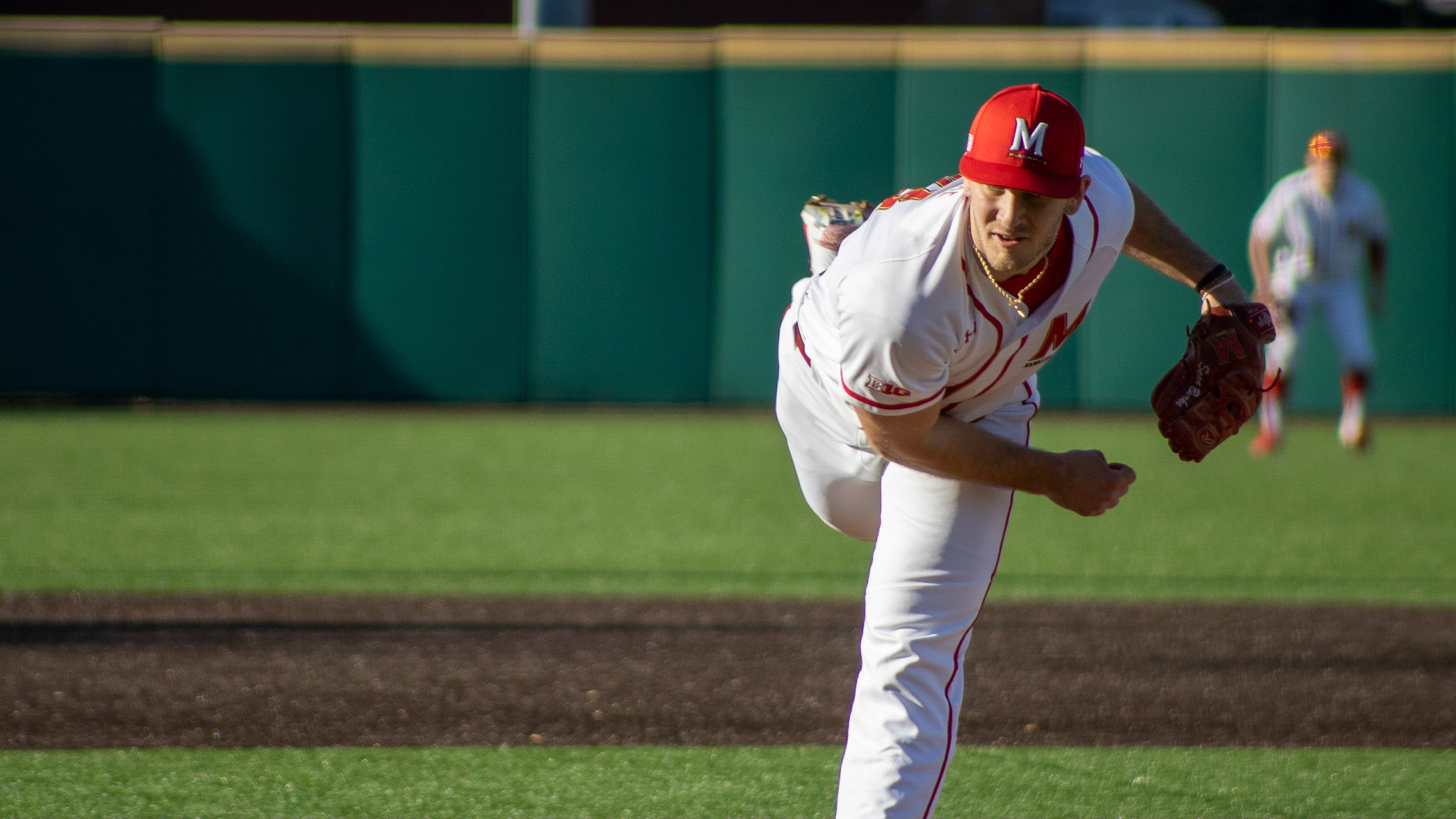 In the first game of the season, the Terps couldn’t hit much of anything. But against the Scarlet Knights on Friday, they couldn’t stroll around the bases enough.

Off the back of a three-run home-run by Chris Alleyne, a two-run homer by Benjamin Cowles and two other solo home runs, the Terps ambled to a 13-8 win over the Scarlet Knights in their home opener.

“13-8 is not a normal Friday night score,” coach Rob Vaughn said. “It was a good night to hit, runs were big … it was a really big time come-from-behind win.”

But it wasn’t all roses. A long first inning would be an understatement for the Terps’ Sean Burke.

An opening double by the Scarlet Knights’ Rodriguez and a fielder’s choice at first allowed Richie Schiekofer to reach base, setting the tone for Burke’s first shot at their batting order. From a frustrating call at the plate that scored Rutgers’ first run and a couple walks mixed in with clean strikeouts, the inning had a bit of everything. The Terps found themselves in a 3-0 hole that they were all too familiar with given their struggles against the Michigan State Spartans on the opening weekend.

Maryland didn’t do too much better at the plate in the first inning, but Chris Alleyne saved the Terps. A fly-out by Matt Shaw led Alleyne to second; he then stole third and then a ground-out by Randy Bednar sent the Terps to their first run and Alleyne home.

“Bubba did an unbelievable job for us in the first, creating a run for us without a hit,” Vaughn said. “It’s incredible, it’s what seniors do.”

Burke would retire the next three batters in the second in short order with two strikeouts and a fly-out. As in his first start, Burke seemed to be settling down and throwing a clean game after starting shaky.

More excitement surrounded the Terps’ offense as an otherwise quiet second inning saw Tucker Flint and Tommy Gardiner strike out before a jolt of electricity shook the Terps briefly. Benjamin Cowles stepped up to the plate and hit his second solo home run of the season, leaving no doubt as if it would go over the wall or not. James Heffley grounded out to end the inning with the Terps down 3-2.

“We just got a little more comfortable [since the first game],” Cowles said. “I think it was first-game jitters but we’re settling in nice.”

Rutgers would fight back with a Chris Brito solo home run of their own at the top of the third and reestablish the two-run differential. In a similar fashion as the Terps last inning at-bat, the Scarlet Knights remained quiet offensively after the big hit and retired their last batter on a pop-up.

A quiet bottom of third for the Terps and an empty top of the fourth for the Scarlet Knights set up a momentum-changer for Maryland. The bottom of the fourth started with moderate success from the Terps: Flint walked and Benjamin Cowles continued his hitting success with a long single.

After a talk from coach Rob Vaughn, Chris Alleyne stepped up to the plate. Alleyne made contact on a ball that went hard foul on his first swing, but he wasn’t done. With two runners on, Alleyne rocked a ball that rose over the high centerfield wall and changed the entire game for the Terps. All of a sudden, the Terps were in the driver’s seat with a 5-4 score to end the fourth.

Meanwhile, Sean Burke stayed hot with only three hits allowed since the second inning and retired the Scarlet Knights’ batting order up in the fifth. Another solo home run by Bobby Zmarzlak put the Terps at 6-4 heading into the sixth.

A tiring Burke was replaced in the sixth by David Falco after 115 pitches and allowing two quick singles at the start of the inning. Like Burke, Falco had a shaky start, but he ended the inning with only one earned run. The Scarlet Knights made a pitching change of their own but it didn’t start well, either.

Another Ben Cowles home run scored two runners and a RBI single by Randy Bednar sent Chris Alleyne home and the Terps to a definitive 9-5 lead. More stellar hitting led the Terps to a resounding 12-5 lead that the Scarlet Knights would never be able to recover from.

Eleven total hits on the evening accentuated the Terps’ best offensive performance this season leading up to their Saturday doubleheader with the Scarlet Knights.

“Just got to do the same thing tomorrow against a good arm,” Vaughn said. “They’re gonna come out hungry and ready to go tomorrow, so we’re gonna have to answer them.”