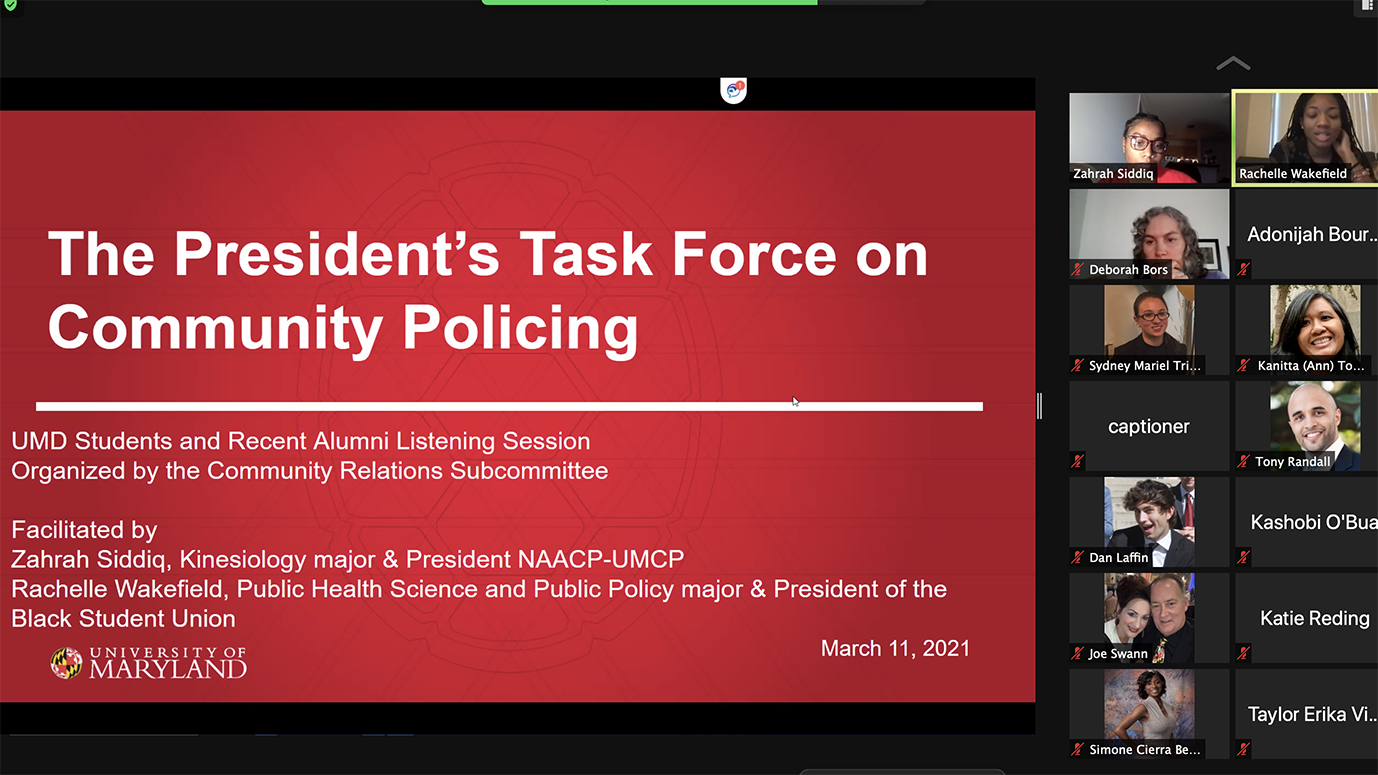 About 20 University of Maryland students gathered virtually Thursday to discuss personal experiences with and recommendations for University Police.

The listening session was a part of a yearlong evaluation of the police by the President’s Task Force on Community Policing, which will deliver a final set of recommendations by the end of the spring semester. The task force also held a listening session in December where students were asked similar questions.

Students discussed their comfort levels with the police, how well they understood the resources the department offers and recommendations they have for community relations involving University Police.

Some students anonymously shared uncomfortable experiences they have had with University Police. One student said they called the police when they were afraid to leave their apartment because there was a rowdy group outside and they heard the police yell at the group, yet they were told there was no one outside.

Another student said they were so intimidated by the police that they reported a stalking incident to the university rather than the police.

However, another student said the University Police were helpful when her car broke down and made sure the situation was handled.

While students reported mixed experiences with University Police, many Black students spoke about how they felt uncomfortable with the police in general and wanted to see the department work harder to build trust.

“It’s really important to acknowledge that a lot of Black students are bringing their previous experiences with police,” said Shelton Daal, a graduate student at this university. “If we had a better impression of what UMPD specifically does, then we can potentially separate between what UMPD does and, in general, our experiences with the police.”

Additionally, students expressed that they wished there was more communication from University Police. Some students questioned what certain university police units did on the campus, like the K-9 group or the police auxiliary unit.

Some students brought up discomfort with the University Police’s reporting system when it comes to crimes in the area, and said they wished there was greater transparency regarding how the department deals with the alerts the general student body receives.

Students offered a variety of suggestions on how University Police could improve their relationship with the community, such as a student-led police ambassador program to provide education about the police, further education and maintenance of police resources like the blue-light system and more communication with students and the community.

“That communication piece is lacking but also a really strong and important part in connecting all of us, police and the UMD community,” said Zahrah Siddiq, a kinesiology major and president of this university’s NAACP chapter. “Implementing them more into the community will kind of help us establish some type of relationship and trust.”

This listening session is the last event in the task force’s plans to connect with the university community. A campuswide survey will be sent out in the coming days as the last way for the community to express their opinions before the task force creates a final set of recommendations.