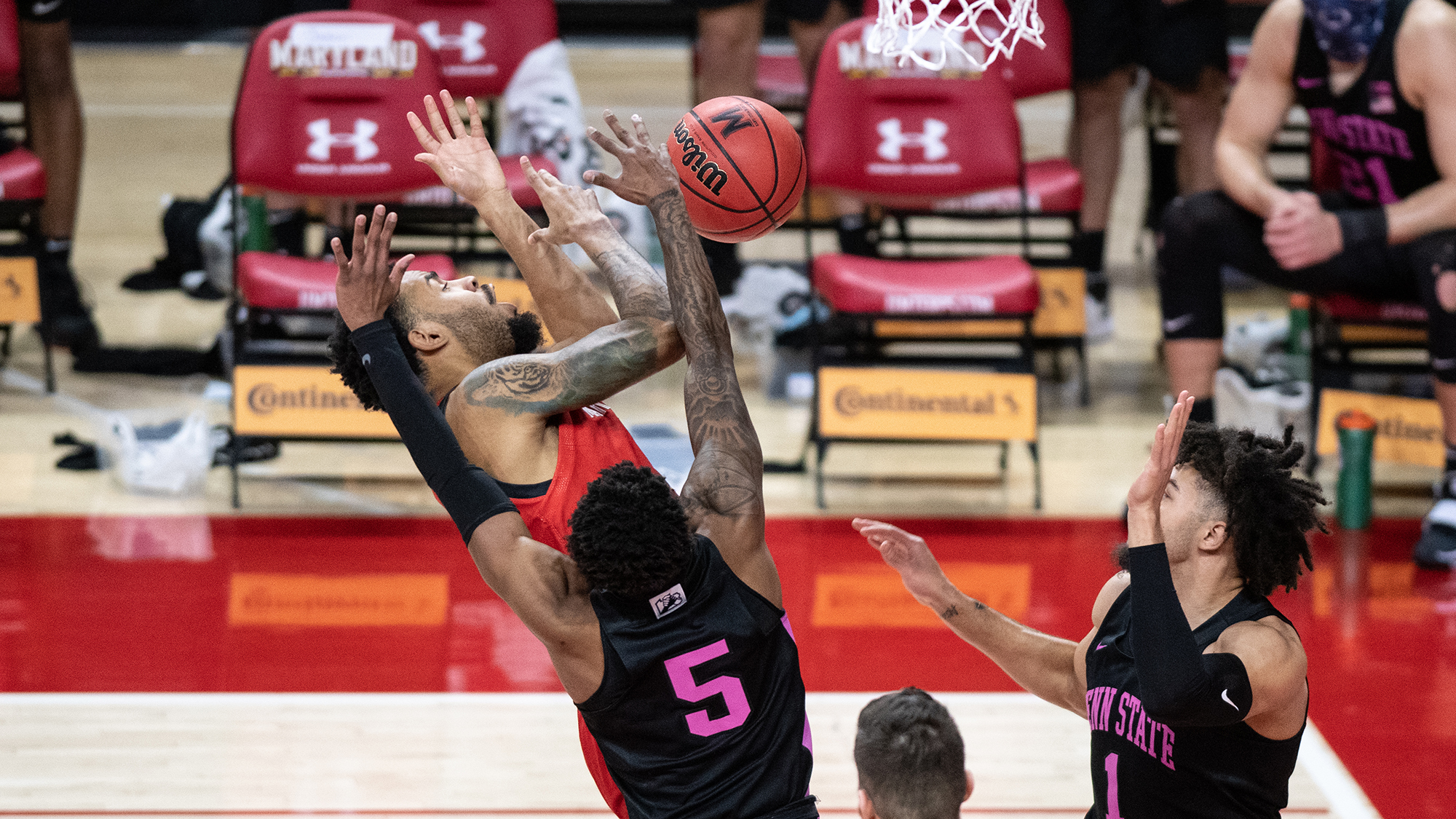 Maryland men’s basketball’s bench poured onto the court, smiles wide across their faces as they came to embrace Donta Scott. The sophomore had just sunk a tough-angle three to push the Terps’ advantage to 14 against Penn State, capping an 11-0 run that had coach Mark Turgeon’s squad confident they’d send their seniors out on top.

But then, the points evaporated. And so did that lead.

Penn State outscored Maryland by 19 the rest of the way, the offensive efficiency and stifling defense that previously piloted the Terps to a five-game winning streak disappearing at a critical juncture. That ugliness reached its peak in the final 10 minutes of Sunday’s contest — which led to the Nittany Lions’ comeback victory.

“We lost the game before that,” Turgeon said. “If we just keep guarding, we win the game.”

And that led to Maryland getting bullied off the glass by Penn State. The Terps squandered 39 rebounds to the Nittany Lions, the most they had given up since the two teams last met on Feb. 5.

Much like that contest, Penn State outworked Maryland’s undersized rotation on the boards, tallying a 10-1 offensive rebounding edge. One of those came from Seth Lundy, who knocked his missed runner back to a row of waiting black shirts. The ball made its way to an open Myles Dread, who easily drained a three to kickstart the Nittany Lions’ previously dormant attack.

“We let them get in the paint too often,” guard Aaron Wiggins said. “They made tough shots, they got momentum going toward the end of the second half. … They executed, they didn’t let up.”

After scoring just 36 points and being held to 27.9 percent shooting in the game’s first 30 minutes, Penn State closed the contest on a 30-11 run. It made seven of its final 13 shots and 13 of their last 14 free throws, turning a 14-point deficit into a five-point triumph.

Much of that production came from Lundy, who poured in 31 points on the evening. Thirteen of those came down the stretch, including the go-ahead lay-in with 1:23 left and the clinching three-ball with 32 seconds remaining.

On that last shot, Lundy cycled around the floor, freeing himself of Scott’s gaze. The sophomore caught and released an open look, flexing and screaming in celebration as the Terps remained in a daze.

And as Lundy took off and the defense collapsed, Maryland’s offense also went quiet.

The Terps sank just three field goals in the final 10 minutes, including a five-plus minute scoreless drought after shooting 57.1 percent up to that point. While it struggled with turnovers and bricked shots against Northwestern, Maryland shoehorned itself into poor looks on Sunday.

Instead of handing it off to an open Hakim Hart, Darryl Morsell crashed the paint and was swallowed by the Nittany Lions’ defense. With the shot clock ticking down, he kicked it to a covered Scott, whose falling shot did not go.

And with a chance to recapture the lead, Eric Ayala matched up one-on-one with Dread. But instead of crashing the net like Turgeon wanted, he pulled up for a contested mid-range jumper that fell way short and clanked off the rim.

Those extra dribbles — that selfish play — cost the Terps dearly.

“Just be mindful of the plays you make,” Scott said. “Make sure it’s the right play at the end of the day, not to force it, not to go for the championship play, just go for the simple plays.”

And Maryland must remember those words as it slides into the Big Ten Tournament. After two frustrating losses in the past week, the Terps have suddenly lost their room for error.

Maryland must limit its mistakes and play a clean 40 minutes on both ends if it wants to extend its season beyond Thursday. And if that happens, the Terps could leave the court with smiles once more.

“We were winning the whole game, and we just didn’t finish it the right way,” Turgeon said.