With family in the stands, Maryland women’s basketball celebrated its Big Ten title in style 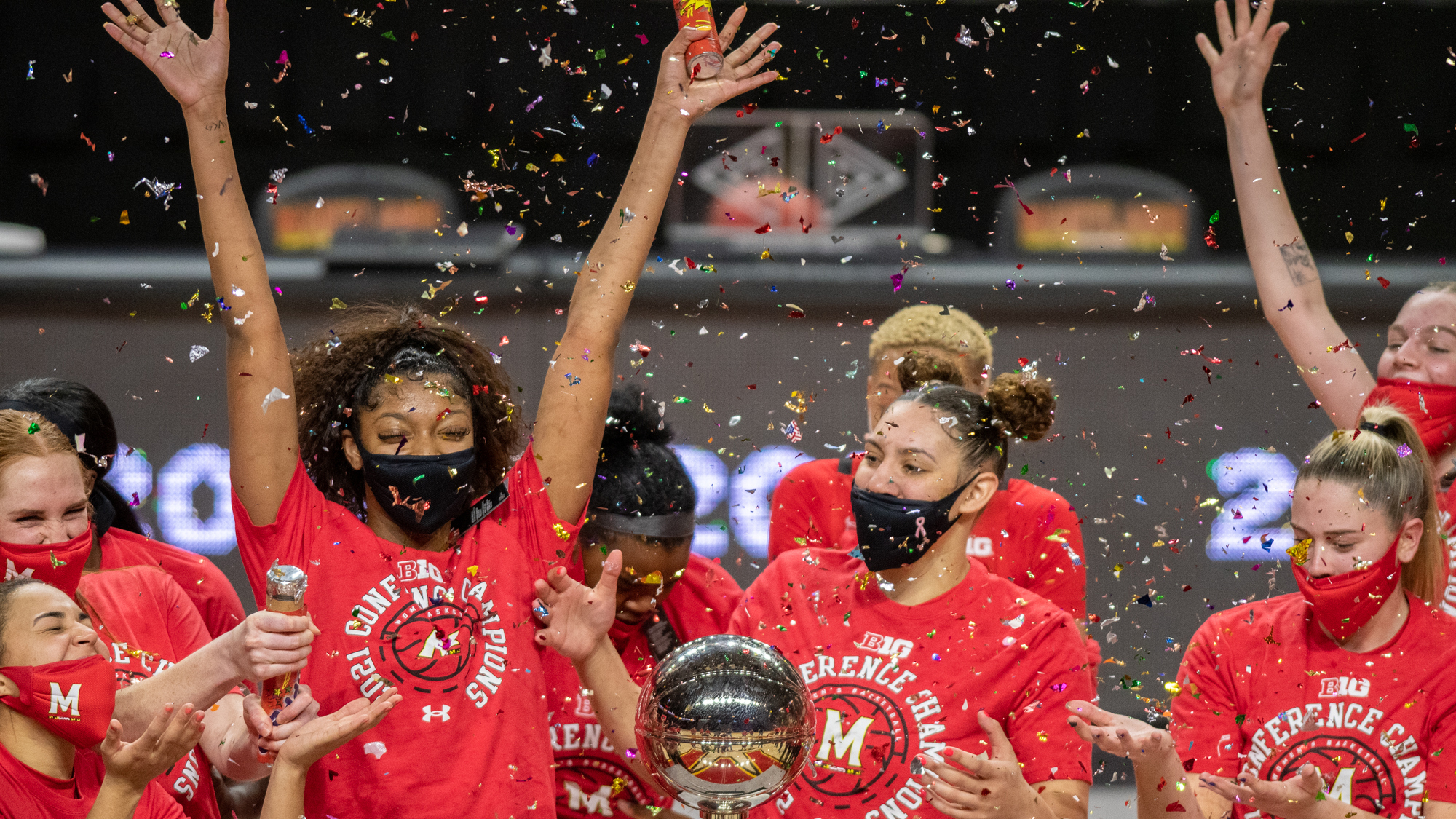 One by one, the members of Maryland women’s basketball came up to cut the net. It became a well-oiled practice: One would climb the ladder, snip a piece of the net and briefly remove their mask to pose for a picture.

It wasn’t just players ascending to take a piece of history after the Terps clinched the sole possession of the Big Ten regular season title; players, coaches, support staff and managers were all a part of the ceremony. Coach Brenda Frese said it was to commemorate a season like no other where everyone played a part.

The most striking part of the net-cutting, beyond the fact that Maryland doesn’t usually do ceremonies like this for regular season titles, was that it didn’t take place in an entirely empty and cavernous arena.

For the first time this year, some of the Terps got to play in front of their families, who were allowed in the Xfinity Center for the 88-61 drubbing of Penn State. For Mimi Collins and Ashley Owusu, this feature of the celebration was most valuable. The two players have enjoyed breakout sophomore campaigns, at times carrying the load for Frese’s squad.

And on Saturday, they showed off their burgeoning play in front of those who matter most: their families.

“It’s very heartwarming to see our family out there,” Collins said. “We have such a great support system within [Maryland] and also with just being around each other and our families outside of that.”

Collins and Owusu, who both grew up near College Park and went to Paul VI Catholic High School in northern Virginia, emerged as stars this season.

After Angel Reese’s injury, Collins stepped into the starting role and set career highs in scoring, rebounding, three-point makes, assists, blocks, steals, games started and minutes played. She got to show off her talents against Penn State with her family in attendance, scoring 10 points in the first quarter and finishing with 12 points, five rebounds and a block.

Collins’ family sat behind the Maryland bench, meaning the forward heard everything they said.

In her sophomore season, Owusu has taken a step beyond the one that made her Big Ten tournament MVP last year. She’s become the best player on a loaded Terps attack, fourth in the conference in points per game and second in assists per game.

And finally, her family was able to see her impressive play in person.

“It was definitely special and very cool for our family to come and see us play, being this is our last home game,” Owusu said. “And it just so happened that it was also the game for us to close the Big Ten. It was nice for them to see us finally play and get to celebrate with us from afar.”

And it was that celebration that stuck with Owusu as she climbed the ladder to cut a piece of the net, a piece of history. She looked into the crowd and waved the net at her family in the stands, sharing this moment with them after a season spent apart.