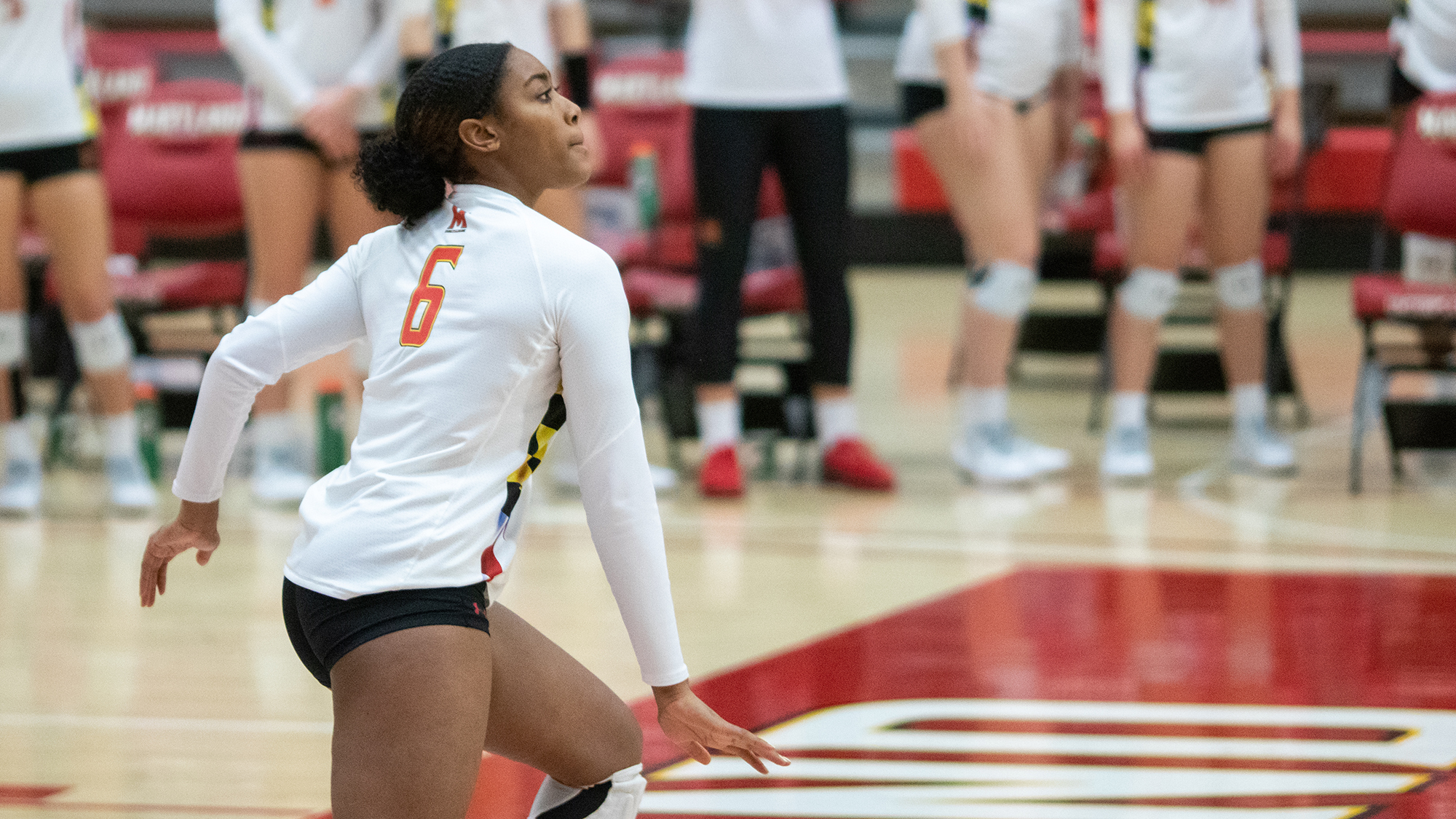 Maryland volleyball’s Maddie Naumann corralled a serve, flicking a pass to Sydney Dowler, who, in turn, set the ball for an awaiting Erika Pritchard.

Pritchard unloaded on the Hoosier defense, soaring into the air for a powerful putaway try. And as her shot was tipped weakly back over the net and out of bounds, Pritchard and the Terps had exacted their revenge on Indiana, winning their second match of the season over the Hoosiers, 3-1 (25-23, 23-25, 25-17, 25-21).

“Obviously happy to get a win,” coach Adam Hughes said, “I thought we had a much better defensive performance, obviously with 16 blocks… that’s something we’re taking some pride in.”

Maryland’s woes from the service line in Friday’s matchup carried over into the first set of Saturday’s contest, as it gifted Indiana three early points due to errant service swings.

The Terps soon regained form, though, racing out to a 12-7 lead behind three quick putaways for outside hitter Erika Pritchard. As Maryland continued to stretch its lead, Indiana coach Steve Aird called a timeout to talk things over with his squad.

However, while Indiana successfully pulled off the first set comeback in Friday’s matchup, Maryland wouldn’t be denied in Saturday’s rematch.

The Terps’ touted defense hardened late in the set, stifling the Hoosier attack with a wall of blocks by middle blockers Rainelle Jones and Laila Ricks. And after a Sam Csire kill gave the Terps a set point, a thunderous rejection by Ricks and Jones at the net pushed Maryland over the top, narrowly winning the first set, 25-23.

The momentum garnered by Maryland’s opening set victory spilled over into the second frame, as Csire and Pritchard continued to impose their will on the offensive end. A barrage of kills from the pair, accompanied by a Maddie Naumann service ace, gave the Terps an early five-point advantage in the second set.

But, yet again, Indiana responded.

Two service aces dropped deftly over the net by outside hitter Morgan Geddes spurred a 4-0 Hoosier run, forcing Maryland coach Adam Hughes to burn a timeout with his team’s sizable early lead reduced to just one.

And despite a scintillating seven-kill second set from Pritchard, Indiana’s mid-set adjustments proved too much for the Terps to handle. After back-to-back Hoosier kills gave Indiana a three-point lead late in the set, Geddes’ fifth kill pushed the Hoosiers to the brink of knotting the match at one set apiece.

Pritchard, Maryland’s workhorse on the afternoon, responded with a kill of her own to bring the Terps back to within one, but it wasn’t enough to stop Aird and the Hoosiers. Edwards spiked home a kill the very next point, clinching the second frame and drawing even with a 25-23 second set victory.

And while the first two sets of action were characterized by lead changes and momentum shifts, the third set proved the exact opposite.

Maryland took a 2-0 lead behind a Pritchard spike and service ace and never looked back. Csire gave Indiana’s defense fits, accumulating four of her 16 kills in the third frame, as the Terps ran away with the third set, 25-17.

“I think the biggest difference [was] definitely our energy,” Csire said. “Yesterday we were kind of just slow a little bit, we didn’t really look like we wanted it, and then today we came out… and we fought and we cheered really loud, I think that got everybody’s energy [up].

So, after being swept just 24 hours prior, Maryland was just one set away from splitting the season series against the Hoosiers, holding a 2-1 lead going into a pivotal fourth frame.

In contrast to the lopsided third frame, the fourth set of action was a slugfest. Neither team drew a lead larger than one point until late in the set, when a block assist by Pritchard and Jones gave the Terps a 20-18 edge.

And Indiana could do little to prevent the Terps’ momentum late in the set. Though the Hoosiers clawed one back, Maryland continued to steadily pick them apart. And with an emphatic kill from Pritchard, the Terps clinched a 25-21 set victory — sealing their second win of the season.

“This is a tough conference, we know that, we respect everyone.” Hughes said. “I’m proud of the bounce-back.”