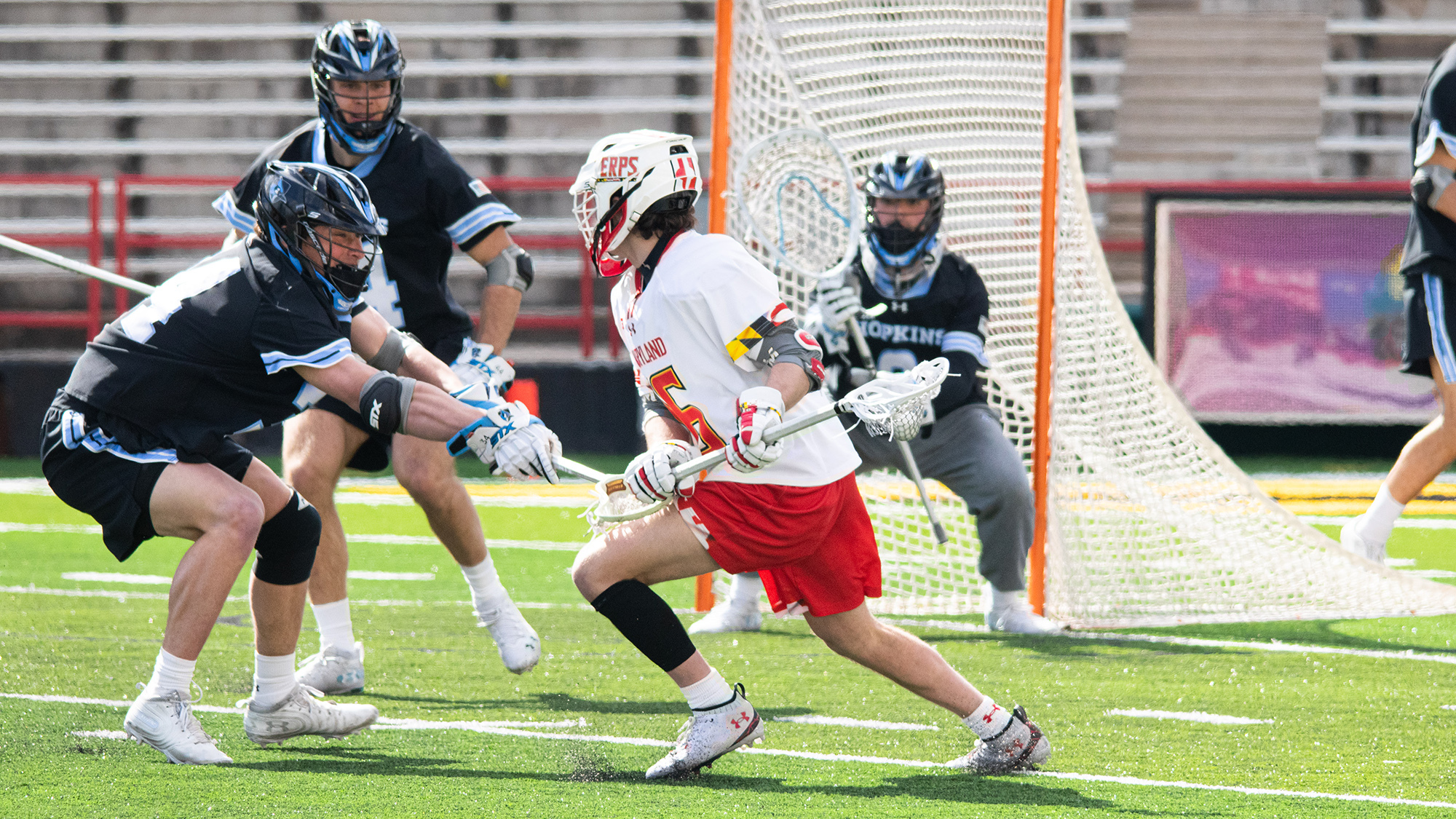 Midfielder Logan Wisnauskas attempted to leap over the goal crease and net his third goal of Maryland men’s lacrosse’s rivalry game against Johns Hopkins on Saturday afternoon. But Wisnauskas was met halfway by Hopkins defenseman Beaudan Szuluk, who sent Wisnauskas to the turf.

Both Szuluk and Wisnauskas were penalized, and attacker Jared Bernhardt netted his second goal of the game during their absence. The Blue Jays had a pair of players exit with penalties less than two minutes later, and Maryland took advantage once again.

Johns Hopkins penalties helped kick start the Terps’ attack in the second half, where they outscored Johns Hopkins by eight goals en route to a convincing 18-10 win over the Blue Jays.

“I’m happy for our guys to get a win over our biggest rival,” Tillman said. “I was very proud of the way the guys came out of halftime and played in the third quarter.”

Maryland’s prolific goal scoring was no joke once again, especially in the third quarter which featured eight goals by Tillman’s squad. Bernhardt had three of them, the first of which moved him into fourth all-time in career goals at Maryland.

With an assist on the final four goals of the quarter, the Terps shared the ball well in the third. Anthony DeMaio’s fourth goal came off a nice dish from Wisnauskas, who set a new career high with seven assists on Saturday.

Maryland still held the advantage in the fourth quarter, finding the net three more times. Wisnauskas found Bernhardt for the final Maryland goal, a fitting end to the first installment of “The Rivalry” in 2021.

“I give our guys credit,” Tillman said. “They started to feel some momentum, and they just kind of rode that wave.”

The first half was far more contested, and it took a while for either team to get going on offense. No shots found the net in the first six and a half minutes of the game, a stretch that featured three saves for goalie Logan McNaney.

At the other end of field, the Terps had no luck scoring either. Bernhardt had a shot deflected right in front of the net, and Daniel Maltz hit the post on the same possession.

But once Johns Hopkins star Joey Epstein broke the tie, goals came from every which way. Anthony DeMaio notched the first two for the Terps, the first of which was a top-shelf snipe from ten yards out.

The Blue Jays scored three more times in the quarter, and Maryland added goals from midfielder Roman Puglise and attacker Logan Wisnauskas to make it 4-4 after 15 minutes.

Bernhardt cut left to right across the middle and nailed an unassisted goal to commence scoring in the second frame.

Three straight scores for the Blue Jays gave them a two-point advantage, but Wisnauskas and DeMaio each got back on the scoreboard with under three minutes to play in the first half. Maltz assisted on Wisnauskas’ goal, giving Maryland’s leading goal scorer three assists in the first half.

DeMaio and Epstein both had hat tricks in the first 30 minutes, and their teams went to the locker rooms tied 7-7.

“We kept saying be patient,” Wisnauskas said. “Things didn’t come easy for us in the first half, and we were just waiting for that third quarter run.”

The goals would only continue to flow in the second half. So too did the caginess, with both sides looking to impose their physicality on their interstate rivals.

The penalties began to stack up. But it was Tillman’s squad who brought finesse as well as physique, mounting a barrage of shots on Johns Hopkins’ cage.

Maryland responded to the Blue Jays’ physicality with vigor, putting together yet another dominant performance, another step on the ladder as the Terps look to solidify their status as Big Ten and national championship contenders. They’ll stay at home next week for a top-five matchup with No. 5 Rutgers.

“I want the guys to enjoy it,” Tillman said, “but also realize that come tomorrow and Monday, we have a big challenge ahead of us next week.”