How in the world did Megan Thee Stallion get a boring magazine cover? 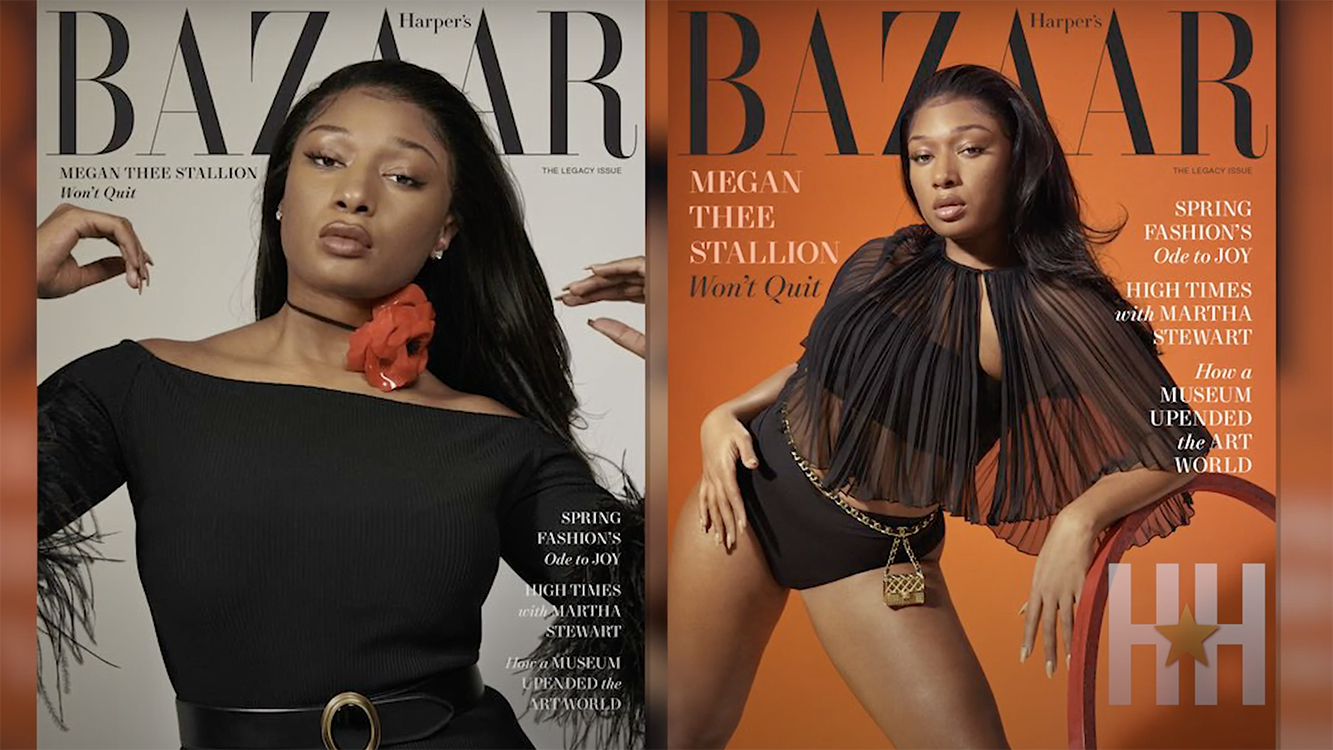 Not many people buy or read magazines anymore, but the influence that comes with landing a cover is still incredibly significant. In November 2020, Vogue gave its first-ever solo male cover to Harry Styles, whose subsequent photos in a dress provoked a meltdown from some and celebration from many others.

Fast forward to March 2021, and powerful women of color are everywhere, including Jennifer Lopez on Allure, Priyanka Chopra Jonas on Elle U.K. and Megan Thee Stallion on Harper’s Bazaar. Having a confident, sex-positive female rapper such as Megan featured is an exciting moment of recognition. The award-winning artist is at the top of her game in a male-dominated genre — but her Harper’s Bazaar issue included two covers that were very underwhelming.

Both show Megan dressed in all black. In the first, she is covered in Chanel. In the second, she’s wearing a Saint Laurent bardot jumpsuit. Her one pop of color comes from a random choker-like accessory with a red flower on it. It looks weirdly cheap and nothing like her typical style. Despite the expensive brands, the lively rapper’s looks are lackluster.

[Get to know all things spiritual on the podcast ‘Your Magic’]

Look no further than Megan’s Instagram to see her typical style is everything bright and bold. She has gained recognition for her style and turning out looks, especially after modeling for Rihanna’s Savage x Fenty lingerie line. She also posts impressive makeup looks that she does as a Revlon ambassador. Minimalism is great, but not something that she has ever seemed to embrace — which is why her covers seem off-brand.

Nothing about Megan or her style has ever been muted, but she insisted in her cover story that she can be a “hot girl” however she wants.

Besides the styling, fans expressed disappointment on social media over the shoot’s lighting. Some claimed the photographer, Collier Schorr, did not capture her skin tone in a correct, flattering way. Schorr said in an Instagram post that Megan helped her choose and edit the photos.

“A most remarkable experience making pictures with Megan Thee Stallion who discussed each picture and edited afterwards with me … Total collaboration as it should be to make together new images of her at this moment in her life,” she wrote on her account, which is now private.

If a photographer cannot photograph a Black woman in a favorable way (despite working for one of the most reputable fashion magazines in the world), then it is fair to expect a Black creative director to help. The shoot was in fact styled by Samira Nasr, Harper’s Bazaar’s first Black editor in chief in the publication’s 153-year history.

While the complaints from fans seem unfounded after knowing the background behind the shoot, there is still reason for their outcry. Megan’s cover is one of many that have recently shown women of color in a blatantly boring or untasteful way.

Vogue’s February cover featuring Vice President Kamala Harris generated plenty of controversy. In one shot, Harris stands stiff and awkward, with a smile that appears forced. She is wearing a casual outfit like the ones she campaigned in, including black Converse sneakers.

Demi Lovato reminded us many years ago that it’s OK to wear Converse with our dresses to show how cool and edgy we are. But this is not the Disney Channel, and the styling of the shoot gives Harris an adolescent look that seems like Vogue was trying too hard to make her look like “a cool girl.” While she is allowed to be a normal person, it hardly shows her as a presidential (or vice presidential) figure or celebrates the significance of the first woman of color to ever hold her position.

All magazine photos look fake or postured to a certain extent, but Vogue’s biggest error was in how they edited the vice president’s photos. She looks washed out and lighter-skinned than her normal appearance in other photos. While bad styling is something that any celebrity could fall victim to, this was obviously problematic. Another cover that showed similar issues was Simone Biles’ cover on the August 2020 edition of Vogue, shot by Annie Leibovitz. While the famous gymnast still looked great in the photos, appropriate retouching and highlighting could have made her look even better. Editing is different depending on skin tone, and not doing it properly for women of color shows a blatant lack of care and consideration for the subjects.

Megan’s dark, shadowy cover from this month shows that problems Black women face in photo shoots, high fashion or not, are widespread. The covers are not inherently racist, but lackluster styling and poor lighting and edits leave so much to be desired. Representation is important, and seeing successful Black women and women of color in these major publications will always be valuable. But if there’s a key takeaway from this recent trend, it should be that there needs to be clear preparation and care taken for their shoots.