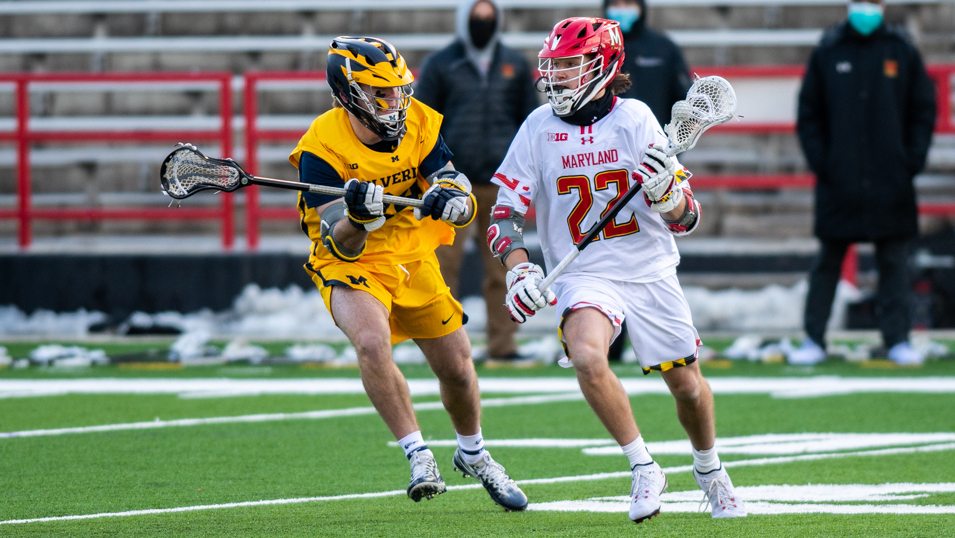 Baltimore-area high school lacrosse powerhouses Loyola Blakefield and Calvert Hall were set to square off on May 5, 2020. That battle would have featured two five-star Maryland men’s lacrosse recruits — Jack Koras for the Dons and Daniel Kelly for the Cardinals.

That game, of course, never took place due to the COVID-19 pandemic, and Koras and Kelly wouldn’t play on the same field until their debuts for the Terps on Saturday.

But no senior season, no fall scrimmages and no nonconference play seem to be no problem for coach John Tillman’s freshman class last weekend. The group made an immediate impact in the Terps’ 20-9 win over Michigan. The small but mighty nine players look poised to contribute in 2021 after an unconventional beginning to their college careers.

“It felt great being out there,” Koras said. “Losing my senior year and having the opportunity to play the sport I love again, it was a surreal moment to have.”

Koras showed out in the third quarter of the opener, maneuvering his stick to his left hand and firing a shot directly through the legs of Wolverines’ goalie John Kiracofe. The Lutherville, Maryland, native added an assist on the Terps’ 18th goal to lead all Maryland freshmen in points in his debut.

Kelly and fellow five-star recruit Eric Malever followed suit with their first points of their college careers, each registering an assist in the fourth quarter.

Tillman thought the freshmen earned their playing time based on their work during the preseason, and he wanted to see how they’d perform in a game situation.

“Some of those guys have done a really good job in practice,” Tillman said. “We just didn’t have many scrimmages and other opportunities to kind of see what they can do.”

With COVID-19 protocols restricting players’ activity outside of practices and games, the young group has spent even more time together than is typical.

And since all but two of them play on the offensive side of the ball, even time in practice is spent growing together.

“This freshman class is very close because we’re going through a year that no other class will ever go through,” Koras said. “We’ve bonded over that. … It’s been great because we’ve all been dealing with the same mindset and trying to help the team out.”

Tillman’s small recruiting class in 2020 indicates the Terps’ depth at the junior and senior level. Maryland brought back every player that scored at least two goals last season, providing built-in leadership for the offensive newcomers.

After Koras’ first career goal, Fairman was waiting there on the sideline to give him a congratulatory hug.

“The seniors really took me under their wings and told me to stay calm and play my game,” Koras said. “That really helped me a lot.”

A rocky road to their first career game didn’t deter Koras, Kelly and other freshmen from coming ready to play for a top-five team. And as Maryland’s schedule picks up, Tillman can see the future of his program taking shape before his eyes.

“We feel lucky because we’ve had some guys that have played well,” Tillman said. “I thought Malever did a good job, I thought Koras did a good job … I have high expectations for those guys as we go.”