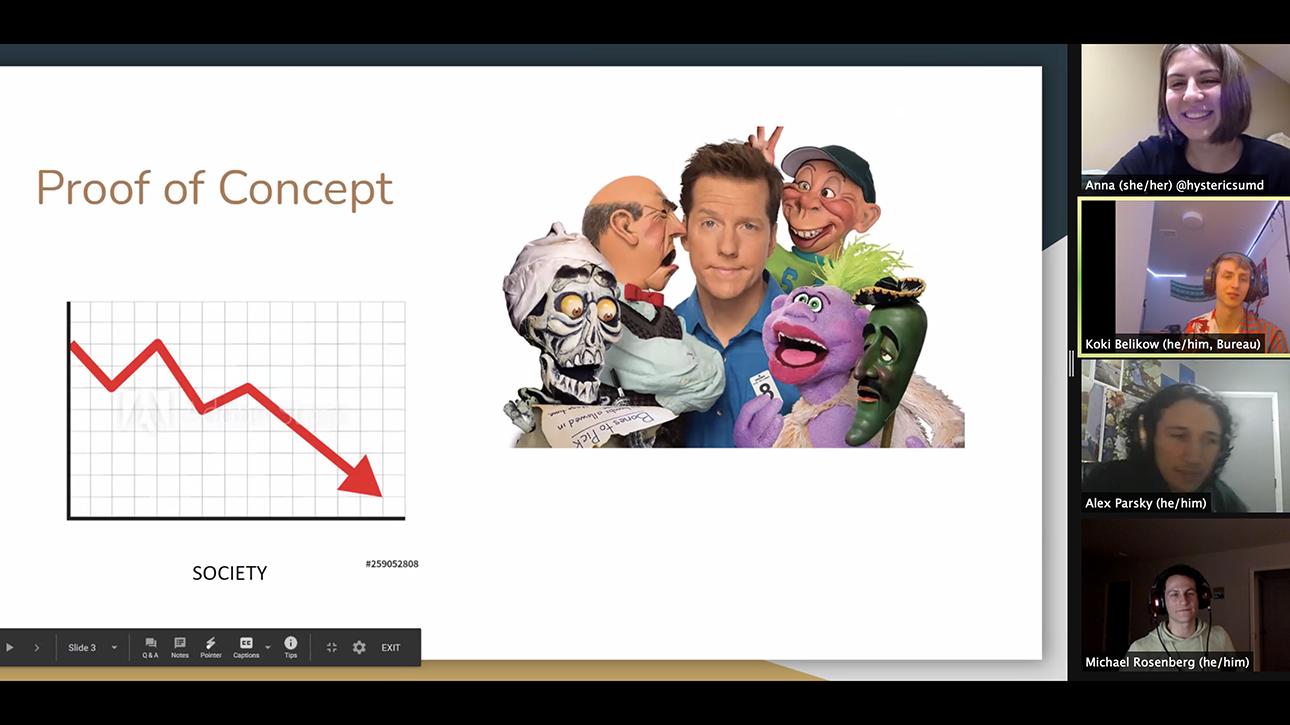 Life in a virtual pandemic world is filled with a lot of dread. Luckily, we can still crack jokes, and at the NextNOW WinterFest Monday night, University of Maryland comedians reminded us that some things will always be certain: college guys will continue using dating apps for validation, and the men on said apps will never stop including pictures of them holding fish in their profiles.

The festival is being held all week through The Clarice Smith Performing Arts Center, and it kicked off with a comedy show Monday night featuring The Hysterics and The Bureau, two campus comedy groups.

“Standup comedy is the most relatable format of comedy, because it’s really a way of sharing your personal experiences,” said Olivia Janik, a freshman journalism major. She is a member of The Hysterics, an all-female and nonbinary comedy group at this university.

While it was unfortunate that Janik had to experience swiping past pictures of those slimy creatures (the fish, that is), she was at least able to joke about it as a part of her virtual standup set for NextNOW WinterFest.

Putting on a performance of any kind over Zoom is difficult, but comedy presents its own unique challenges.

“It’s about hearing people … It’s a reactionary activity. I need reaction to do standup — otherwise, it’s weird because I’m just talking to myself,” said Anna Artazova, a sophomore English major and president of The Hysterics.

Zoom could easily be the enemy of an art form that relies on audience participation to gauge success, and any online meeting is proof enough that participation is at its lowest on Zoom.

“A lot of people don’t want to interact,” Janik said.

[Review: The final ‘To All The Boys’ film goes through the motions of a rom-com — and little else]

Usually, comedians would be able to feed off the audience’s energy at a real-life, official venue. On Monday, most cracked jokes from their bedrooms and could only connect with the audience through the chat function.

Still, Artazova tried to make the NextNOW show as close to professional quality as possible. She had the idea to include a “panel.” Two members of The Bureau and Hysterics would be on screen together during a standup set. She saw this in virtual shows through professional clubs and thought it would be a great way to make the performers and audience more comfortable. Fellow comics served as a miniature audience to hype up and laugh with the main performer.

It could feel strange to be laughing in your room alone while watching an online comedy show, but it feels just as weird for the comedians who have to guess if anyone even liked their work.

“I’m sure every standup comic that performed yesterday is still wondering if they bombed or not,” Artazova said.

Luckily, she already had experience performing in person, which makes her better at predicting which jokes will stick and which will miss. But Janik hasn’t had that experience.

“It was really nerve wracking because I thought I was doing OK, but you couldn’t really tell,” she said. “And I still don’t really know if anyone in the audience found me funny.”

This was only her second time performing standup. For her, not knowing an audience’s reaction makes it a lot harder to improve. Audience members were able to send their thoughts and reactions while she was performing, but Janik said it sometimes got distracting.

The audience almost became part of her set. She even started laughing in the middle of it over one person’s comment, which is about as close to the energy of a real comedy club as possible right now.

Performing is difficult online, and rehearsing is equally as challenging. The Hysterics have encountered all-too-familiar issues like shaky internet connectivity and scheduling problems, Artazova said. Additionally, a lot of the group, including herself, is located off campus, meaning they could not film many of the sketches they had planned to before the pandemic.

[A definitive ranking of niche game shows on Netflix]

However, The Bureau’s portion of the NextNOW comedy night featured multiple recorded sets. Koki Belikow, a junior film major, has been focusing on digital formats such as audio and video.

“It has been super rough … The transition has been bad,” he said. “As much as we really miss that feeling of a live audience, we just can’t.”

So, some members of the group on campus decided to adapt and focus on filming new content along with Belikow. To follow pandemic protocols, sketches had to be shot in one location, all at once. Comedians also needed to secure a negative test result beforehand, which put them on a tighter schedule.

The Bureau also created audio sketches, a medium definitely unique to virtual pandemic comedy. Belikow pointed to the rising popularity of podcasts, especially comedy ones, as one of the reasons the group decided to pursue the projects. One product included an audio sketch entitled “The Good British Baking Show,” inspired by the TV series.

To end the night of comedy, Belikow was shown a random presentation through Google Slides and was asked to present it. He improvised his way through a “Why We Need to Destroy Jeff Dunham” slideshow, which was reminiscent of the pandemic PowerPoint night so many people have participated in.

Along with more traditional formats like standup and the media-driven content from The Bureau, the groups collaborated to bring a laughter-deprived audience a necessary distraction.

“It’s so nice to see that people are still committed to putting on a really good show,” Belikow added.