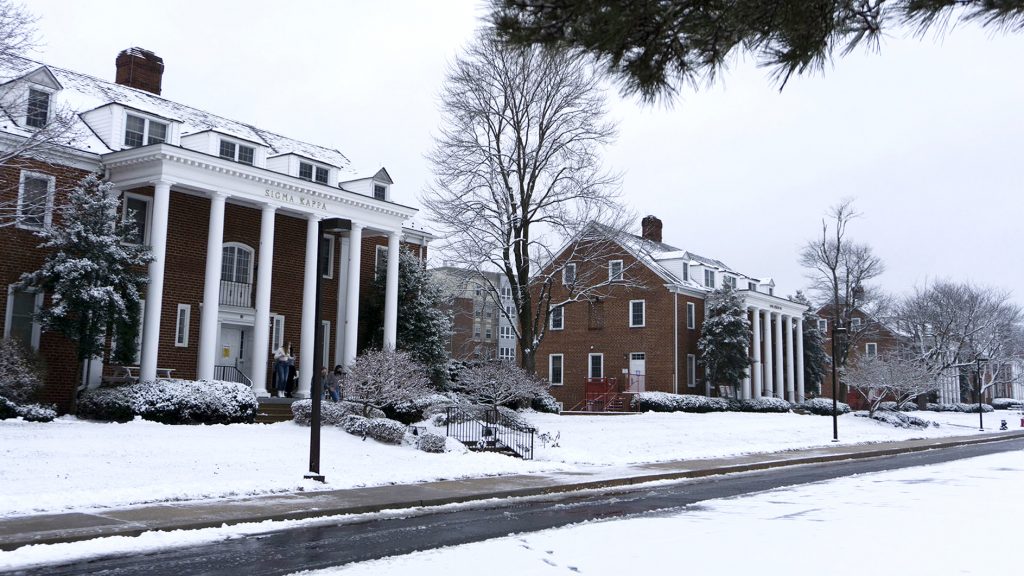 Editor’s note: A previous version of this story incorrectly generalized the spring sorority recruitment experience to all sororities. This story reflects the recruitment process of Panhellenic Association sororities, not of multicultural or National Pan-Hellenic Council sororities. The article has been updated and clarified to reflect that.

Spring Panhellenic Association recruitment typically includes a visit to all 16 PHA sorority houses at the University of Maryland, but this year, with the annual event shifted to an online environment, potential new members spent hours on Zoom screen with a quicker transition between houses. Every spring semester, about 800 students participate in PHA’s spring recruitment. Over the course of two weekends, potential new members go through four rounds, gradually visiting fewer chapters each time. The events culminate with bid day, when potential new members receive a bid from a sorority.

Despite the shift online, many new members and recruiters alike were happy with the way the events turned out.

Tori Lanner, a freshman communication major, said she was happy with the outcome of recruitment and applauded the chapters for putting together a positive experience.

For Lanner, recruitment was a chance to meet new people — especially upperclassmen — which has been a challenge throughout the pandemic.

Still, building relationships through a screen is challenging, said Lanner, who joined Gamma Phi Beta. The online setup also meant that while potential new members could talk with recruiters, there weren’t many opportunities to talk with others who were going through the recruitment process, Lanner said.

[UMD PHA to implement changes to sorority recruitment this spring]

Lanner said her sorority wrapped up the recruitment process by celebrating with a safe, online bid day. She applauded PHA sororities for being “creative with their circumstances.”

Brooke West, a junior neuroscience major in Alpha Chi Omega, has experienced recruitment in-person in the past. But, she said, online recruitment was “surprisingly, a lot of fun.”

It meant she could have some really great conversations, she said, which could sometimes be difficult in-person, with so many people talking in one room. Over Zoom, she was able to really get to know people in their own spaces, West said. Although she was sad the event couldn’t be in person, she enjoyed the online interface.

“Having the opportunity to not be surrounded by a billion other yelling voices and not having all those different people in one room talking over each other,” she added.

Although PHA sororities don’t make decisions based on potential new members’ clothing, in past years they were able to tell if potential recruits were putting effort into recruitment by looking at their outfits, sophomore Alpha Chi Omega member Isabel Mubiru said.

The first round of PHA recruitment, which is called the Values Round, lasted two days, with the first one taking around six hours. Mubiru noted that she interviewed between 20 and 25 girls that day and definitely felt Zoom fatigue, as opposed to a normal year in the house where she could take small breaks and be more social.

“I probably should have got blue-light glasses, because I was in front of [my computer] for ages,” she said.

CORRECTION: Due to a reporting error, a previous version of this article misspelled Isabel Mubiru’s last name. This story has been updated.