Defending DC from attacks is a Band-Aid solution to extremism 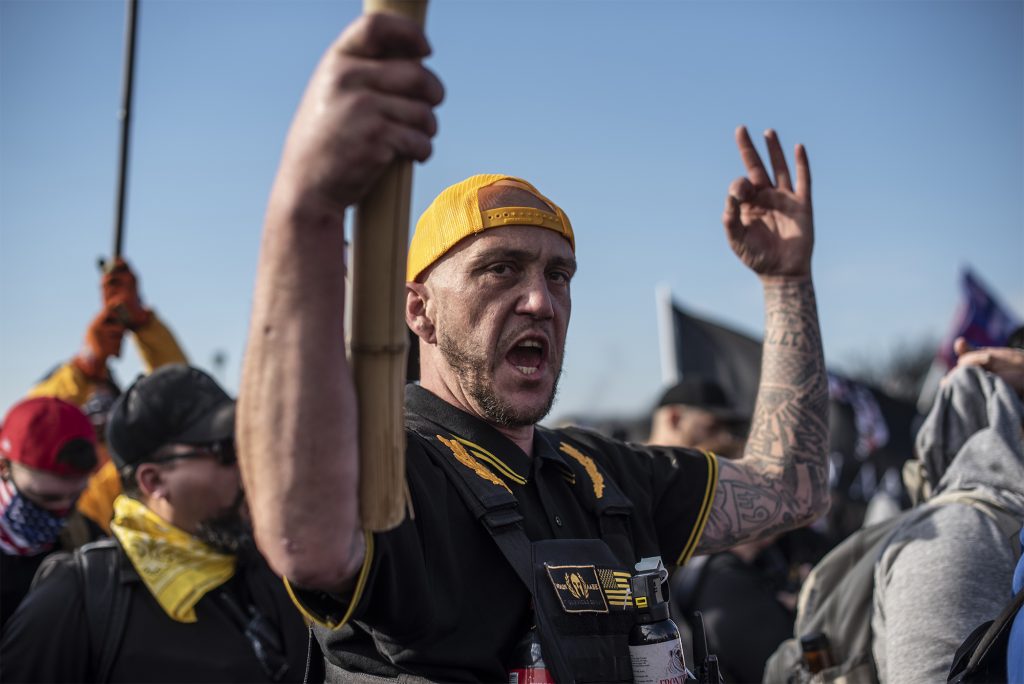 A member of the Proud Boys raises a white power sign while chanting at a rally in Washington, D.C. in support of President Trump on Dec. 12, 2020. (Eric Harkleroad/The Diamondback)

Almost three weeks ago, four years of a madman’s ravings finally culminated in a violent mob. Images and footage from the insurrection are now iconic: a man leaning back in House Speaker Nancy Pelosi’s chair with his feet up on her table; a half-naked, fur-hatted, face-painted Viking with a megaphone; a man proudly toting a Confederate flag draped over his shoulder. From both their words and their actions, it’s clear these domestic terrorists are white supremacists and far-right extremists.

In the aftermath of this insurrection, it seems people are asking two main questions: “How did this happen?” and “How do we stop this from happening again?”

Authorities in Washington, D.C., seem to think the answer to both is that security should have been tighter. Ahead of Joe Biden’s presidential inauguration, D.C. residents had a 6 p.m. curfew. A security zone was erected around downtown D.C. with 25,000 troops stationed in the capital, and as many as 7,000 National Guardsmen might stay until mid-March. These security measures are not just an extreme inconvenience for residents and businesses in the capital — they also exacerbate existing transportation and food security issues.

While these measures may seem necessary as deterrents against more rioting or insurrections in the months to come, shows of military force alone will not stop such efforts in the long term. White nationalism and far-right extremism aren’t rational. They’re not the type of afflictions that can be solved through some muscle and the threat of jail time. These are deeply rooted convictions that can only be changed if radicalized people become more accepting and open-minded about differences — whether of opinion or appearance.

D.C. authorities’ answers to the questions are wrong. This insurrection happened because some people became disillusioned with normative American values that treat diversity — of both thought and appearance — as a strength, not a weakness. They didn’t just buy into a former president’s racist worldview because security was lax. Those disillusioned terrorists have misidentified diversity as the source of their troubles and are willing to use violence to right those perceived wrongs.

Once our soldiers go home and the barricades come down, Washington, D.C., is just as vulnerable as it was during the insurrection. Those extremists who sat at home and didn’t participate in the Capitol riots, as well as those who may be radicalized in the future, will still exist. This is because we — the non-violent and non-extreme people of the U.S. — haven’t changed any minds. Those who believe they are superior because of their race or that Trump’s second term was stolen from him or that members of Congress should be killed will still believe those things years from now.

As long as people hold these extreme beliefs, our democracy, institutions, and national identity will be threatened. This attack happened because people’s minds changed toward radicalization; future ones can be prevented by changing their minds again to prevent more people from being indoctrinated in white supremacist culture.

Instead of believing fear will change people, we should aim for reconciliation with our nation’s values, the truth and our communities. Have conversations with your neighbors, crazy uncles and conspiracy-theorist former classmates who have become fixated on a vicious ideology. There needs to be a counter to ill-intentioned and influential people, such as former Secretary of State Mike Pompeo, who recently claimed multiculturalism is “not who America is.”

I’m not saying there is no place for heightened security in the nation’s capital. In the short term, it’s probably necessary for citizens to recover a sense of safety and deter violence — but that’s exactly the issue. Physical force is a short-term solution to a problem that needs a forever solution. It’s not sustainable.

Extremism can’t be solved in half-measures. It needs to be picked at with every tactic — especially ones that promote discourse — before our country can be at ease again. While intimidation is complementary, conversation needs to be the highlight. If we think we’re done after the troops go home, we might be one more attack away from shattering. With our democracy at stake, we can’t afford to not thoroughly address extremism.

Jessica Ye is a freshman mechanical engineering and government and politics double major. She can be reached at jye1@terpmail.umd.edu.