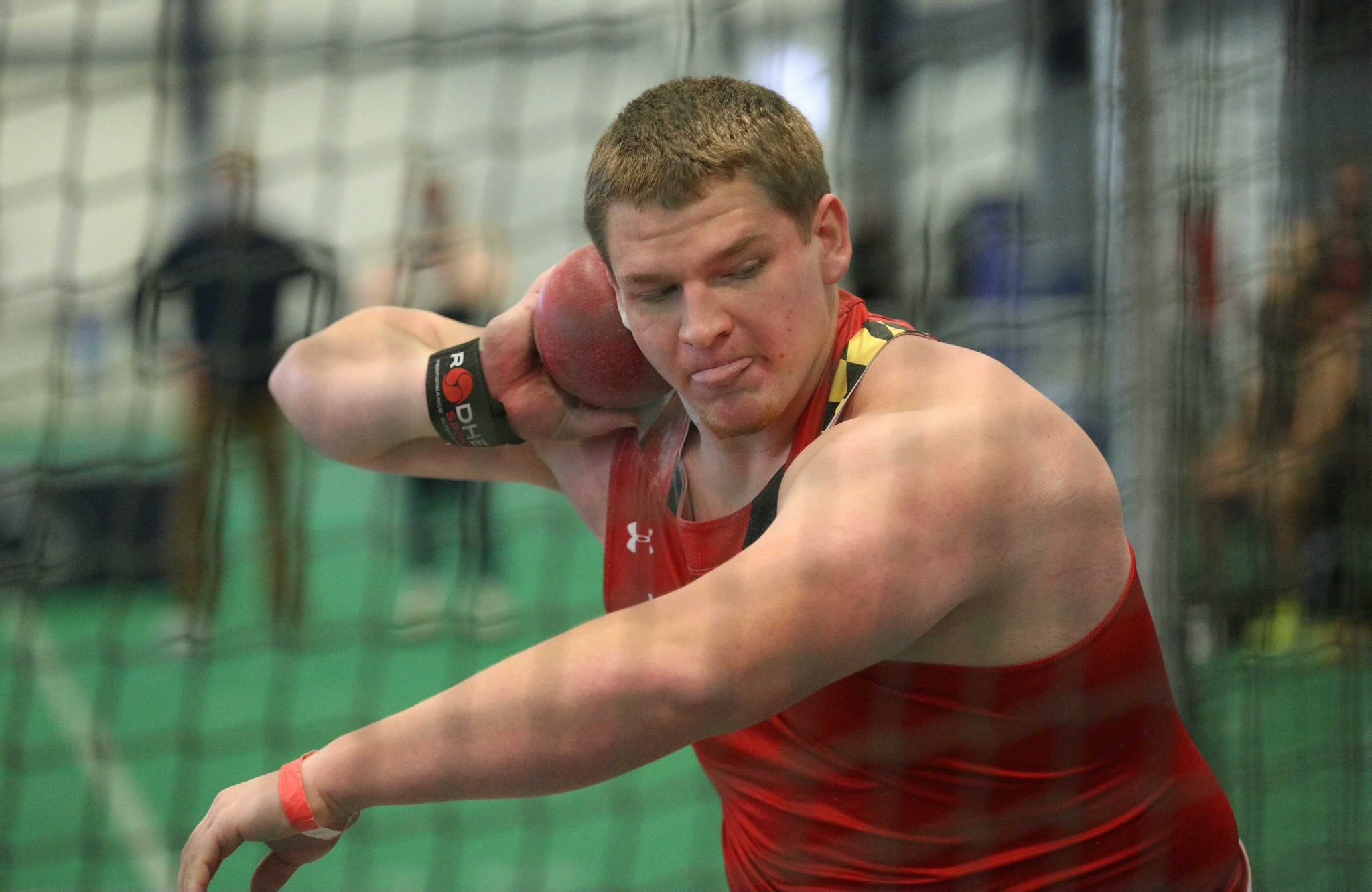 These were Angel Nkwonta’s accomplishments Jan. 16, when the senior threw for 20.62 meters in the women’s weight toss event — a distance that broke the school record by 2.6 meters.

In scarily similar fashion, the transfer shattered her own record Saturday, throwing for a distance of 21.36 meters. The feat moved her to first all-time in the state record books, breaking a record that had stood for nearly five years.

On Jan. 16, the Terps set a number of personal bests — and took home numerous events against tough opponents. And exactly a week later, Maryland recaptured that same performance, further improving in its second meet of the year.

In an inversion of last week’s events, the men’s side took to the track first.

It started with the shot put. Maryland dominated the event, with strong performances from freshmen Jeff Kline and Hayden Tobias, who finished in first and third respectively. Kline impressed in his first Maryland appearance. His mark of 18.27 meters is the fourth-best finish in program history.

“I’m also disappointed knowing I can do better,” Kline said.

Tobias was able to replicate a similarly strong performance for Maryland in the weight toss as well, throwing for a distance of 16.93 meters, good for third place in his freshman debut.

On the track, sophomore Caleb Dean showed out in his return to Pennsylvania, finishing second in the men’s 60-meter hurdle with a time of 7.98 seconds, just a tenth of a second behind Penn State’s Sincere Rhea. Sophomore Drake Murphy was not too far behind, finishing in fifth at 8.37 seconds.

Maryland’s Chase McGeehan and Brady Snelson were neck-and-neck throughout the men’s 800-meter race, finishing a quarter-second apart for second and third place respectively. The two also broke personal records in the process.

Joining them in a series of record breaking was Travis Valmon, who placed fifth in the men’s 600-meter with a time of 1:21:17, moving the senior up the Maryland record books to number eight all-time for the program.

The second half of the day’s meet saw much of the same from the women’s team — headlined by dominant performances from Nkwonta and senior Alice Barnsdale in the weighted throw. Nkwonta, who made waves last weekend with her record-breaking showing, picked up exactly where she left off, finishing first with the newly held state record. Barnsdale placed second with another strong performance, throwing for 17.55 meters.

While unable to capture the same success she held in the shot put last week, Nkwonta still delivered another solid performance, securing a fourth-place finish with a distance of 15.2 meters.

The women’s team continued to find success on the track, highlighted by Bria Mack, who secured second place in the 60-meter dash, narrowly edging out Ohio State’s Devine Parker by two milliseconds.

The Terps also turned in a strong performance in the mile run. Maryland occupied four of the top five spots in the race, with Samantha Facius missing out on a first place finish by 1.8 seconds.

Jaida Smith also excelled, narrowly securing a third-place finish in the women’s 200-meter dash with a time of 25 seconds flat, holding off with four competitors in hot pursuit behind her.

Smith’s performance was the culmination of another weekend of improvement for the Terps. Nkwonta improved on last week’s excellence. Kline climbed the all-time standings. Valmon, Mack and Facius all showed further development.

And as the final event ended, one thing was clear: the Terps had shined in their return to State College.