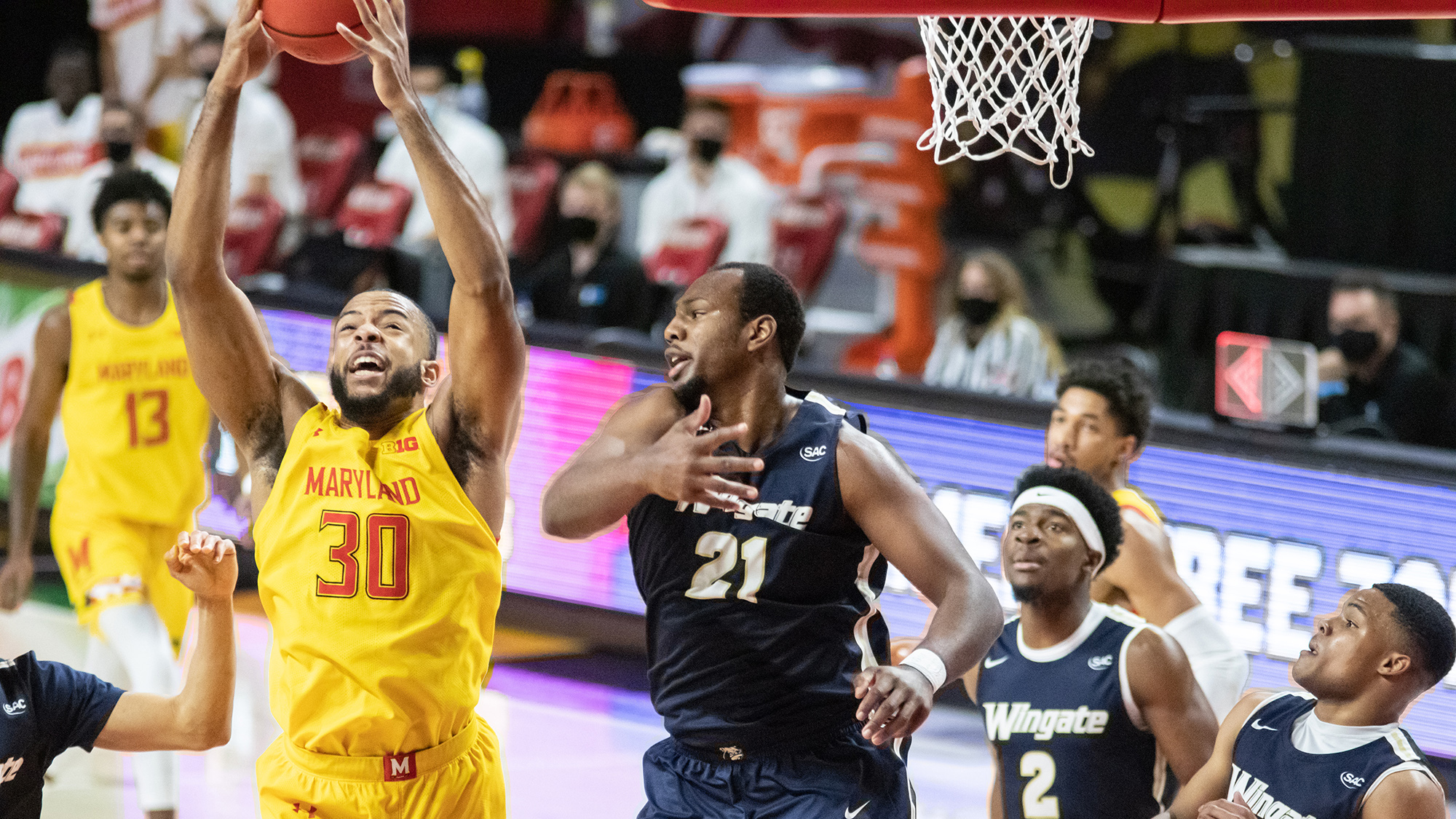 Galin Smith felt the warm glow of the spotlight Friday afternoon against Wingate. And a little more than two minutes into the second half, he embraced it.

The Maryland men’s basketball senior darted to the rim after fielding a pass from Aaron Wiggins. Then he soared, stretching the ball beyond two Bulldogs defenders before slamming it home. When he dismounted, Smith let out a yell.

There are certainly flashier Terps; Donta Scott and Darryl Morsell have developed a penchant for highlight-reel dunks. Wiggins has emerged as a skilled passer, as has Hakim Hart.

But few are as dependable as Smith, a quiet figure who has established himself as a leader during his short time in College Park. He rarely sets the scoreboard alight. Yet, it’s Smith’s willingness to do the less glamorous things on the court — setting screens, boxing out — that has powered Maryland in recent weeks.

“Having a guy like Galin is pretty good for us,” Hart said. “He’s a leader to us, he’s always talking. It leads to good things.”

[After early-season wobbles, Maryland men’s basketball’s freshmen are carving out a role]

That leadership was on full display Friday afternoon. Smith routinely found space in the paint, notching a career-high 13 points — most of which came from dunks. It’s a side of his game that has come on quietly, Morsell said.

“Every time he shoot a hook shot in the post, I think that’s a 100 percent,” Morsell said.

Still, most of Smith’s value comes when the ball is not in his hands. Smith is a bruiser, willing to battle with opposing offenses’ most potent post threats on the defensive end.

That side of his game was particularly noticeable when the Terps took on then-No. 12 Illinois. While matched up against Kofi Cockburn, Smith was a pest, using his 6-foot-9, 235-pound frame to harass the reigning Big Ten Freshman of the Year. Cockburn scored just five points in the second half.

On the other end of the court, meanwhile, Smith flashed another part of his unique skill set: his ability to set strong screens.

“Getting hit by his [screens] is definitely no joke,” Morsell said.

Smith was a constant fixture on the perimeter, offering himself for pick-and-rolls as Maryland mounted its late-game surge. Morsell was the beneficiary, finding room to maneuver in the paint. With Cockburn often forced to step up following Smith’s pick, Morsell had his way, using his speed and quickness to notch 15 second-half points — six of which came off of Smith’s screens.

“I’m not sure he ever talks … unless he’s talking on screens and things like that on the court,” Turgeon said on Jan. 10. “He’s a real quiet kid, but he’s all about winning.”

Smith’s leadership is exemplified in those moments. He’s seen it all over the course of his college career, having played 94 games for Alabama before arriving at Maryland.

So when Smith speaks, his teammates listen.

“Because he’s respected and he has so much experience, when he do talk, his voice carries a lot of weight,” Morsell said.

That voice has become more pronounced in recent weeks, with Smith starting each of the Terps’ last six games. And although there were some difficult moments in that stretch — Maryland lost three straight games at one point — Smith has entrenched himself into the team’s culture. Now, he’s starting to express himself.

“It’s been an adjustment, but it’s been worth it. I wouldn’t want to have to do it anywhere else,” Smith said. “This group of guys that’s here, from the jump, they took me in, wrapped their arms around me and made sure that I was welcome when it didn’t feel like home.”

Smith’s burgeoning confidence and comfort has been clear in recent games. Against Illinois, Smith was a two-way force, his selfless play on both ends of the floor helping push the Terps to victory in a menacing road environment.

He was the star against Wingate, capping off a career day with a highlight-reel slam of his own. And as his teammates frolicked at the sight of his poster, Smith’s importance was on full display: as a quiet leader whose hard-nosed play does all the talking.