Trump will soon be out of a job, but his supporters at UMD have hopes for his future 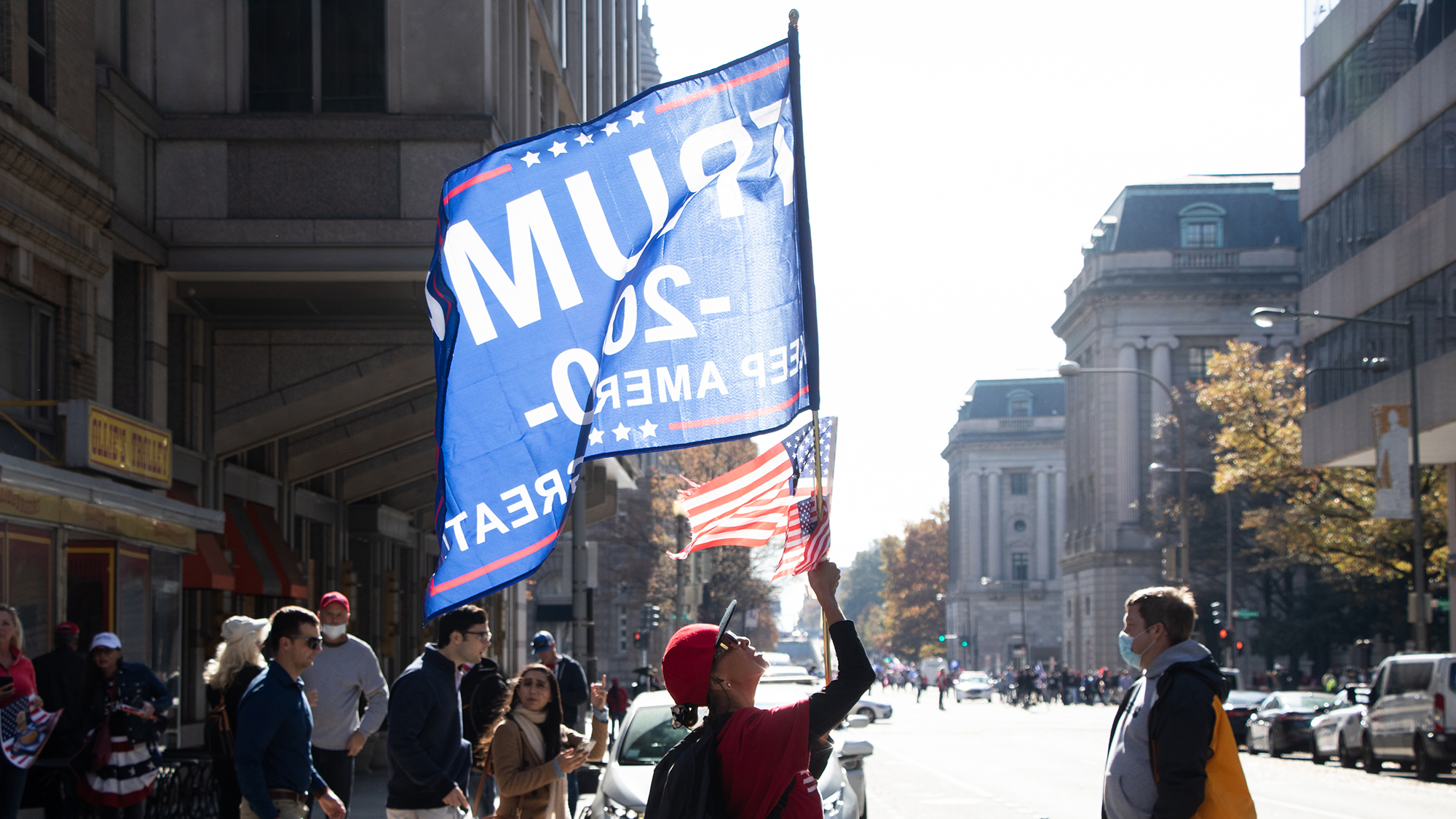 A Trump supporter waves a flag at the Million MAGA March in Washington D.C. on Nov. 15, 2020. (Julia Nikhinson/The Diamondback)

It’s unclear if he’ll take to television. His post-presidential status on Twitter remains uncertain. He may run again in 2024. (Only former President Grover Cleveland has lost reelection and regained office.)

Perhaps no one but Donald Trump himself knows what he’ll do next.

Current and former members of Trump’s base at the University of Maryland are divided over what they want to see from him once President-elect Joe Biden is inaugurated. Most of the students who The Diamondback spoke with don’t want him to run again. Others want a break from seeing him on TV. Freshman Jules Bertholet says he’s torn.

“I’m not sure exactly how much I want him to stay involved,” said Bertholet.

The biology major was born in Paris, but has lived in Bethesda for most of his life. Although Bertholet isn’t yet an American citizen, he’s a member of this university’s College Republicans.

Bertholet views Trump as a flawed leader, but he agrees with the president’s political instincts. He’d like to see Trump continue holding rallies to promote his politics once Biden moves into the White House. Bertholet would prefer a new Republican nominee in 2024, but he said it’s vital the next nominee embodies Trump’s politics.

Like Bertholet, Simon Molina is not yet an American citizen. He was raised by a mostly liberal family in Caracas, Venezuela, and came to the U.S. five years ago with the goal of equipping himself to return to Venezuela and start a political career. He’s studying international relations at this university and would have voted for Trump if he could.

“My grandfather sometimes tells me you need malice in politics,” said Molina, a member of Turning Point USA at UMD and Young Americans for Liberty, a right-wing and libertarian student organization, respectively. “Sometimes it’s a tough job, it’s a tough game, and you need to be a bad boy.”

Molina hopes he’ll be able to vote in 2024, but said he’d like to vote for a Republican candidate other than Trump. He doesn’t believe the president would win another term if he were to run.

Molina doesn’t want to see Trump return to his role as a television personality or a business tycoon, but he said, “[Trump] should not fade away.” Instead, he says he wants Trump to run for another political office, perhaps for a congressional seat in Florida or New York.

Trump wouldn’t be the first ex-president to run for lower office. John Quincy Adams served as a representative from Massachusetts after his single term and Andrew Johnson was elected senator from Tennessee.

[After days in limbo, Joe Biden will become the next president of the United States]

However, Joe Russo, a junior finance major from Monrovia in Frederick County, wants to see Trump take a step back following Jan. 20.

“I want to see him just kind of be like every other president and just kind of hang out, for lack of better terms,” said Russo, a Trump voter.

But Russo doesn’t want Trump to fade from the spotlight altogether.

As a member of the university’s College Republicans and as treasurer for the Maryland Federation of College Republicans, Russo has seen that student Republicans, like himself, are open to changes Trump brought to the party. Russo wants Trump to continue advancing the party away from its more traditional politics and serve as a power broker in upcoming elections.

However, he doesn’t want Trump to run in 2024 and doesn’t believe the president’s ego would allow him to do so. Besides, Russo would like to see a Trumpist candidate who is more “palatable” to the electorate emerge.

Hershel Barnstein, a freshman biology major, doesn’t believe anyone but the president can take the reigns of Trump’s populist, anti-establishment politics that are tugging the GOP further to the right.

“I think you’re going to see a lot of these [candidates] trying to ride the Trump train in 2024 to the White House, and they’re quickly going to find that the Trump train does not operate without its conductor and they’re going to be defeated miserably,” said Barnstein, a member of College Republicans, Turning Point USA at UMD and Young Americans for Freedom.

Barnstein voted for Trump, and he wants the president to continue leading the party once his term ends. He just doesn’t believe Trump will run again, especially considering the lack of support from within the GOP for the false narrative that the election was rigged.

The Reisterstown, Maryland, native thinks an echo chamber for conservative thought would provide a runway for future candidates who are similar to Trump.

Ideally, he said, these candidates would enter politics at the state level and work their way to Congress, offering future Trumpist candidates the support that Barnstein says hampered Trump’s presidency. Barnstein’s looking for staunch loyalty.

A recent Washington Post survey found only eight congressional Republicans have voiced support for Trump’s continued efforts to claim victory in an election that was decided against him. Most have remained silent — a fact that has infuriated Barnstein.

“I’ve just been seriously aggravated lately by the lack of action that I’ve seen on the right, fighting for their candidate,” Barnstein said. “It’s a lot of cowardice.”

Another student, Debra Schwartzben, was once “extremely liberal” and a Hillary Clinton supporter. But her views have since changed — drastically. She now works for Turning Point USA and founded UMD’s chapter. And she voted for Trump.

Schwartzben will vote for Trump if he chooses to run in 2024, but she doesn’t believe he’s the party’s best option. She attended the Nov. 14 “Million MAGA March” in Washington, D.C., and wants the president to continue holding his rallies after his term ends.

“I think it’d be nice to just not have him come on TV and just have like a cleanse,” she said. “Let’s not hear about it. Let’s hear about anything other than Trump for maybe like a year.”