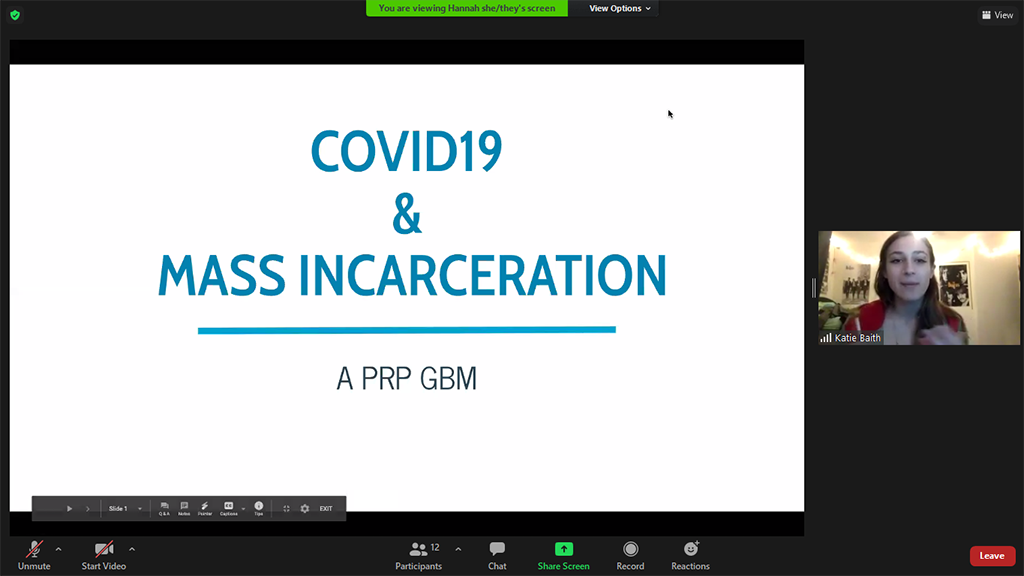 The University of Maryland’s Prison Resistance Project hosted a virtual event on Nov. 19, 2020 to discuss the impact of the coronavirus pandemic on the prison population. (David Suggs/For The Diamondback)

The University of Maryland’s Prison Resistance Project hosted an event Thursday night to discuss the plight of incarcerated persons amid the COVID-19 pandemic.

The group — which aims to foster students’ resistance to injustices within the criminal justice system — hosted the small gathering to discuss how prisons have endangered the physical and mental health of incarcerated people during the pandemic, and how those inside and outside their walls are resisting.

Though conversations detailing the pandemic and its disproportionate effect on Black, Latino  and Indigenous communities have been rife in past months, many of these conversations exclude the effect that prisons have on different populations — with more than 252,000 imprisoned or jailed people infected since March, despite some efforts to quell the spread through limited decarceration.

During the meeting, students discussed a variety of topics including media coverage about COVID-19 in prisons, increases in decarceration around the world and prison abolition efforts amid the pandemic.

“This idea of decarceration is a very fundamentally abolitionist practice,” Trovato said.

Amid the COVID-19 pandemic, inmates have died at a rate of 39 per 100,000, which is higher than the national rate of the general population at 29 per 100,000, according to the Equal Justice Initiative.

But as coverage of the presidential election and its fallout has taken center stage in recent weeks, the experiences of those faced with incarceration have gone largely unheard.

However, efforts to increase awareness have proved encouraging to the PRP. One student, Yasmine Pierre, said that while she felt more attention hasn’t necessarily been raised through mainstream news outlets, platforms such as TikTok have been useful in connecting incarcerated individuals and their conditions to the outside world. Meanwhile, there has been a wave of protests taking place in prison centers across the United States.

“I think there has been more coverage of prisons since COVID, but not in the news sense,” she said. “A lot of people are starting to really see the living conditions and experiences of all these incarcerated individuals.”

“It seems we’ve got more of a focus on the human rights abuses that incarcerated people have to suffer,” the junior American studies and materials science and engineering major said. “I feel like at least that’s progress [and] awareness about it.”

The impact of incarceration extends far beyond the prison walls, afflicting the families and friends of those locked away. That was the case in San Quentin, where demonstrators rallied following the COVID-19-related death of an inmate back in August.

Meanwhile, across the globe, abolition movements have picked up steam, with Iran releasing about 70,000 prisoners due to COVID-19.

“It just shows that these things always were possible,” senior American studies major Hannah Robinson said. “It just took something crazy happening for people to understand that they should happen.”

And although the challenges are daunting, the recent developments in the movement have been encouraging. While COVID-19 has continued to ravage prison populations across the country, seeds of strength and resistance have sprouted — both in the United States and abroad.

The PRP has responded in kind, sponsoring a virtual rally in support of the release of Kenny Collins back in October. Collins is currently serving a life sentence for a 1986 first-degree murder charge. However, no physical evidence linking Collins to the crime was mentioned and his state-appointed lawyer — who was eventually found to be “unconstitutionally ineffective” — never called a witness to testify in his favor.

And although there are significant steps to take, the PRP is hopeful this broader conversation about prison abolition continues in the weeks, months and years that follow.