Hogan needs to put Maryland in a second COVID-19 lockdown 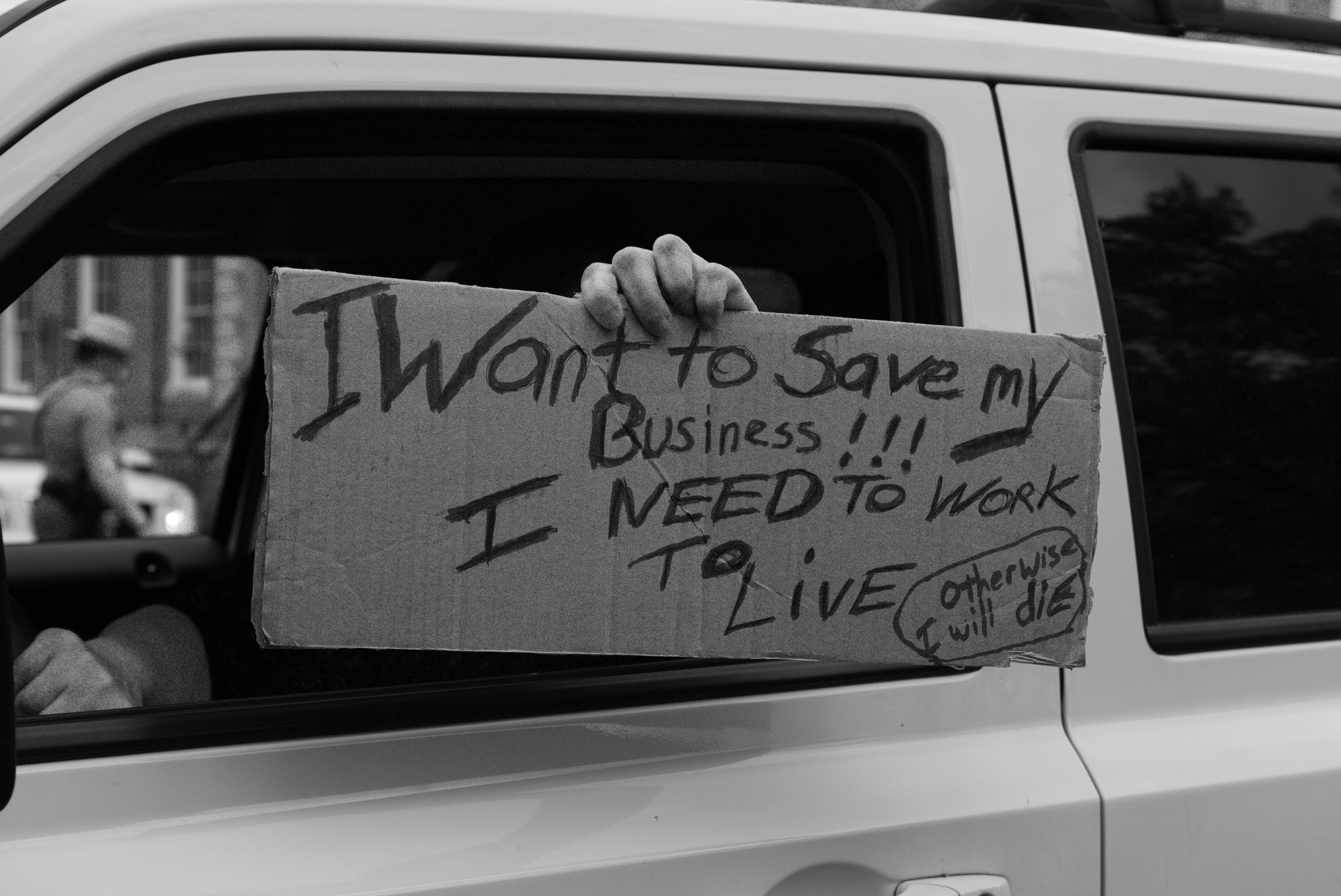 A demonstrator holds a sign at the Annapolis stay-at-home order protest. (Matt McDonald/For The Diamondback)

The coronavirus situation in Maryland is quickly worsening. The DMV area recorded a record number of COVID-19 cases Wednesday, with 3,015 testing positive throughout the region and 1,714 in Maryland alone. It seems as if the state is doing about the same, if not worse, than it was when Gov. Larry Hogan announced the statewide stay-at-home order on March 30. This is particularly alarming given that more than 75 people have died since last Thursday, the state’s positivity rate surpassed 5 percent for the first time since June, and we still have not manufactured a successful vaccine. If that isn’t bad enough, the coming winter may increase our susceptibility to respiratory infection.

Hogan attempted to address this laundry list of problems in a press conference Nov. 10. He struck a scolding tone, stating that “too many residents and businesses have COVID fatigue, and they’ve begun letting their guard down. Too many Marylanders are … hosting large gatherings, crowding in bars, attending house parties, and refusing to wear masks.” He went on to mention that he didn’t want to make decisions that would “further burden” the state’s economy, instead focusing on “keeping hospitals from overflowing and stopping more Marylanders from dying.”

Hogan isn’t wrong, but I find it counterproductive for him to chastise Marylanders, especially small business owners, when his only response to this surge in cases has been to decrease restaurant capacities by 25 percent. Telling people to “wear the damn masks” just doesn’t hit the same when you’ve kept bars and restaurants at 75 percent capacity up to that point. I’m struggling to understand how Hogan can prioritize keeping hospitals from overflowing and preventing the deaths of Marylanders while doing what feels like the bare minimum in response.

I also find it ridiculous that in the midst of all this, Hogan was especially critical of Baltimore City’s much stricter response to COVID-19. He called it “absolutely absurd” that retail stores were still closed, even as the 62 percent Black city attempted to handle a virus that disproportionately affects Black people — all with little to no help from the governor.

I understand that lockdowns are extremely hard (and lowkey apocalyptic) on small businesses, but claiming to keep Marylanders from dying of COVID-19 while basically keeping the state open just doesn’t add up. Hogan and other governors across the country need to stop holding out for a vaccine while this virus continues to run through their states with ease.

Countries across the world have demonstrated that lockdowns are effective in reducing the rate of infection and “flattening the curve.” While the United States was breaking coronavirus case records this week, Australia was sending people back to work, allowing fans at sporting events, and reopening the Sydney Opera House. The Australian government shut the country down for 111 days and can now largely return to their pre-COVID existence — something I’m sure everyone in this country wants.

Without a return to the parameters of our first lockdown, people — especially poor people of color — will continue to suffer. If Hogan’s biggest issue is keeping the economy stable, he should increase his proposed small business stimulus package to $500 million, rather than the $250 million he’s dedicated, as Comptroller Peter Franchot has publicly pushed for him to do.

As with Hogan, I’m unsure how shutting down the virus can be achieved without doing at least one of those first two things. At this point, our only choices are to allow more to die unjustly while we hold out for a vaccine from Pfizer — or follow Australia’s lead.