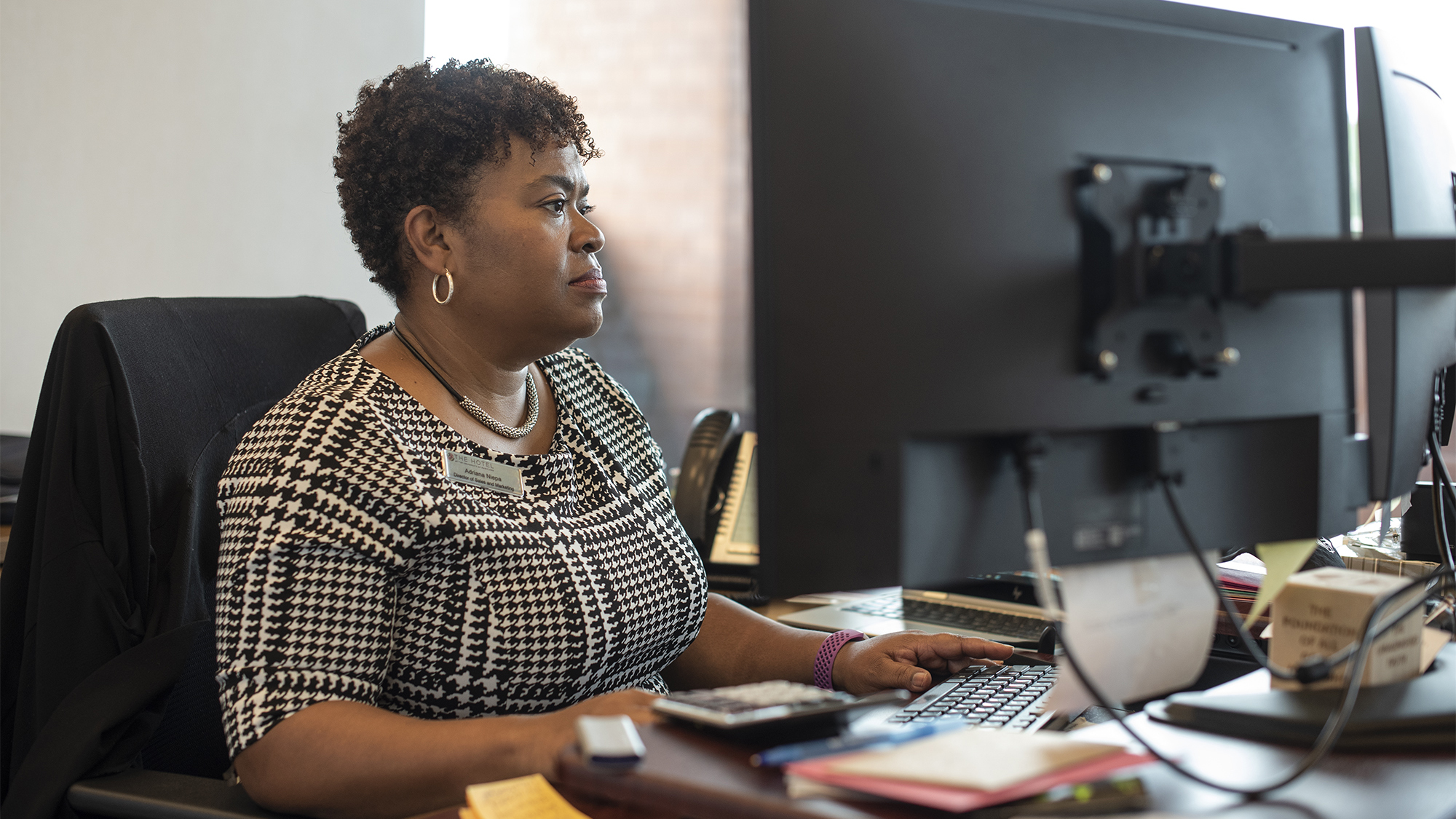 Adriana Niepa, director of sales and marketing at The Hotel in College Park, works in her office on Oct. 20, 2020. (Eric Harkleroad/The Diamondback)

The loss of spectators at sports games, in-person conferences and other events and attractions due to the COVID-19 pandemic has taken an especially heavy toll on one industry: hospitality.

In College Park, where hotel revenue usually makes up more than five percent of the city’s total revenue, the amount of taxes hotels and motels contributed to the budget — which is based on their revenue — decreased by nearly 15 percent since the end of fiscal year 2020 in June.

“The hospitality industry has been devastated by the ongoing public health crisis,” a spokesperson for College Park’s Red Roof Inn wrote in a Nov. 3 email. “College Park is no exception.”

Though Route 1 hotels have been financially challenged, many have taken measures to mitigate these losses.

The Red Roof Inn has used consumer insights and data to stay ahead of the curve, despite the uncertain and challenging climate. Essential travelers and road trippers have been a part of their backbone this year.

“We’re certainly not tracking as high as pre-COVID, but at Red Roof we have been averaging higher occupancy over the last month, in light of COVID, which is higher than the industry,” the spokesperson wrote.

The Red Roof Inn also launched several programs and campaigns since the pandemic began — from giving students discounts for long stays and implementing an enhanced cleaning program, to “Work Under our Roof,” which invites remote workers to get away from their usual home environment for quiet and focus.

The Hotel at the University of Maryland, another Route 1 establishment, has also used accommodation packages to keep business going. They’re offering students long-stay packages this semester, marketing on the stability and safety students might not get living on the campus or in apartments. Students are currently occupying about 10 or so rooms.

However, Adriana Niepa, The Hotel’s director of sales and marketing, said business is not the same.

Prince George’s County has not moved into new phases in accordance with the state and has maintained stricter restrictions on business operations than other counties. For instance, the county is restricting movie theaters from opening and limiting retail establishments to 50 percent capacity — 25 percent less than the state’s guideline.

“Right now, we’re currently under a restriction where there is no dancing allowed,” Niepa said. “We’ve had the opportunity to book weddings, but people want to dance and celebrate at a wedding.”

Revenue at these hotels is important not just to the individual businesses, but also to the city budget.

College Park receives half of the hotel and motel revenue generated from hotel stays in the city, which are taxed at seven percent and zero percent after 30 days.

“[It] is all important for the city’s economy and for the budget of the city government itself,” Mayor Patrick Wojahn said.

In April, the city waived over $100,000 in non-residential commercial business license fees for retail establishments, hotels and motels until the end of the new fiscal year.

Still, hospitality has faced the brunt of the crisis, revealing how some industries are impacted significantly more than others and will experience an “uneven recovery,” Terrapin Development Company president Ken Ulman said.

“You have some [industries and businesses] still thriving,” Ulman said. “It’s almost like we have two economies depending on where you fit in it.”

“The loss of the home [spectator] games is significant … you get so many visiting fans,” said Jeff Brainard, the vice president of sales and marketing at Southern Management, which owns The Hotel and Cambria. “We’ve got Michigan State, Ohio State this year — teams that travel very well.”

Brainard said rooms would typically sell out during these games. Now, few are occupied.

While cautiously optimistic about the future, he said, they need groups and business travelers to return in order to see a solid recovery.

Nevertheless, the Southern Management hotels — like others on Route 1 — are pushing ahead.

They’ve been adding innovations to their existing comprehensive cleaning and sanitation program, Ever Strong. The new initiative will use new airflow technology to bring fresh air from outside and circulate it throughout meeting rooms to give visitors an increased level of comfort. They hope to launch it this fall.

“Necessity is the mother of all invention,” Brainard said.