UMD alumna’s art installation brings color back to The Clarice 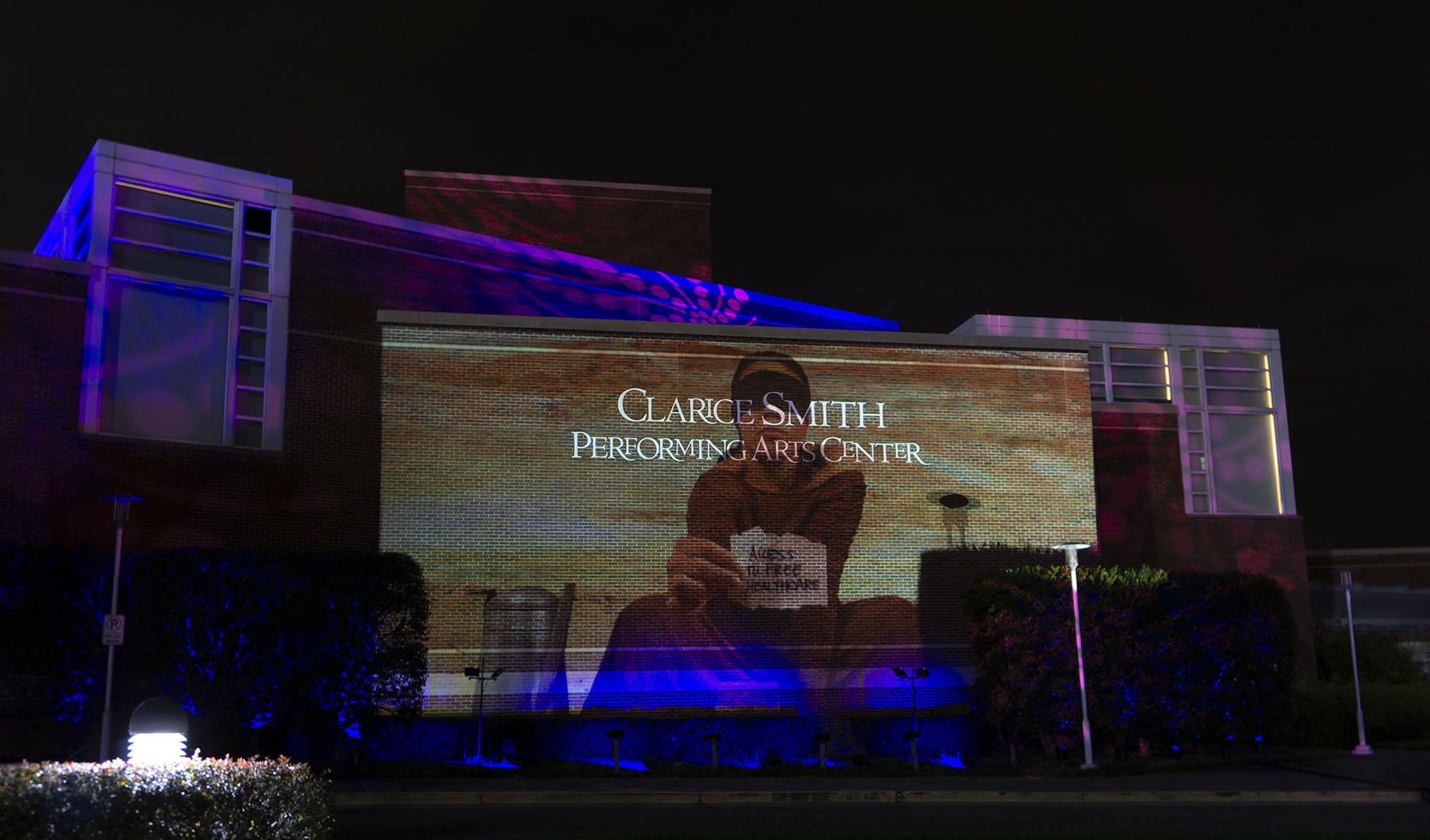 If you walked down the road next to Maryland Stadium last Friday, you heard a rare and distantly familiar sound: the loudspeaker play-by-play of the homecoming football game. Walking down the sidewalk, you might have felt a glimmer of that old game day excitement.

But if you were to continue walking, past the swath of concrete gray parking lot and past the sound of the loudspeaker, you’d end up drawn to the sound of music emanating from the brick wall of the University of Maryland’s Clarice Smith Performing Arts Center. Here, you’d see a spectacle which might be described as the homecoming game’s spiritual opposite: a projection installation, titled “art is water, seeds are change.”

“art is water, seeds are change” was an installation created by multidisciplinary artist Kelly Colburn, as part of this year’s homecoming celebrations. Colburn is an alumna of the MFA design program in the theatre, dance and performance studies school.

Projectors displayed the installation on Wednesday, Thursday and Friday night, from 6 to 9 p.m. The show consisted of a 20-minute set of short films played on a loop, accompanied by swelling orchestral music which boomed across the lawn of The Clarice.

The films consisted of a series of colorful images — the silhouette of a dancer, ricocheting across the wall; a man singing opera, his body ringed by a psychedelic layer of rainbow colors; a woman opening a book, a splash of color shooting out of the pages like the Reading Rainbow logo.

In an email, Colburn wrote that the installation was created to answer the question: “How [do] the performing arts contribute to Terp Pride?”

The answer, she wrote, is through “celebrating multiculturalism and diversity, living in harmony with the environment, making room for self-discovery, enriching our minds, celebrating excellence, joy, and beauty, improving our world and planting seeds for change.”

On a more concrete level, however, the show brought life back to a space that for many months felt underused. During a normal year, The Clarice is a vibrant center for the arts and student life; events like Silent Disc-Glo and the NextNOW Fest saw crowds of students flock to the building in previous semesters.

Now, except for the use of practice rooms, classrooms and the occasional socially-distanced rehearsal or livestreamed performance, the building is better suited as a meeting space for ghosts.

Megan Pagado Wells, associate director of programming for the Artist Partner Programs at The Clarice, helped conceptualize and organize the installation. She said she was inspired by an outdoor projection installation she saw a few years ago on the building of the Walt Disney Concert Hall in Los Angeles.

The Los Angeles Philharmonic had worked with a media artist to create the installation; Wells wanted to see if she could create a similar effect on the outside of The Clarice, a building with many surfaces on which to project light. Wells used photoshop to draft a “map” of surfaces that could be lit and took it to Colburn. They worked on a plan to illuminate the walls of The Clarice over the summer and into the fall.

“I thought it would be a great way to activate the building in a safe way,” said Wells, “and have something that anyone who might be on campus for homecoming could come and see.”

Their vision came to fruition; Wells said that on the first night of the projection show, a dance student approached her and Colburn and thanked them for “bringing life back to the building.”

Small groups of students drifted toward the wall to watch the show Friday night. A crowd of three friends stood in a row, their chins lifted towards the wall. Among them was Stav Elazar Mittelman, a junior mechanical engineering major.

“It’s very very interesting,” Elazar Mittelman said. “Some of the buildings, at night especially, tend to be dreary, but I think if they had installations like these on campus, it really kind of livens things up.”

As he talked, Elazar Mittelman’s eyes drifted back to the wall. A shadow girl danced across the bricks.

“I think it’s really pretty,” Elazar Mittelman said. “And a very innovative way of bringing the work of the students on display.”

Devon Rafanelli, a sophomore music education and percussion performance major, saw the installation Thursday. When she was leaving The Clarice after a practice, she saw people stopping and taking pictures. As she walked back toward her dorm, Rafanelli realized she was standing in the light of the projectors. She stepped back, and looked at the film on the building wall.

“It’s kind of cool because it brings all the art students together,” said Rafanelli.

In fact, according to Wells, the films’ subjects included students from the music school or the theatre, dance and performance studies schools.

In her email, Colburn wrote she wanted viewers of the installation to be reminded of artists’ presence and to be able to “experience an event safely outside their home.”

She wrote that she wanted artists who saw the exhibit “to know that the work they do is invaluable to the betterment of humankind.”

According to Wells, there’s no similar projections planned for the coming months. But “art is water, seeds are change” was “proof of concept.”

“We’ve just proven to ourselves that we can do this,” Wells said. “And now we’re itching to figure out what else we can do outside and on the surface of our building.”