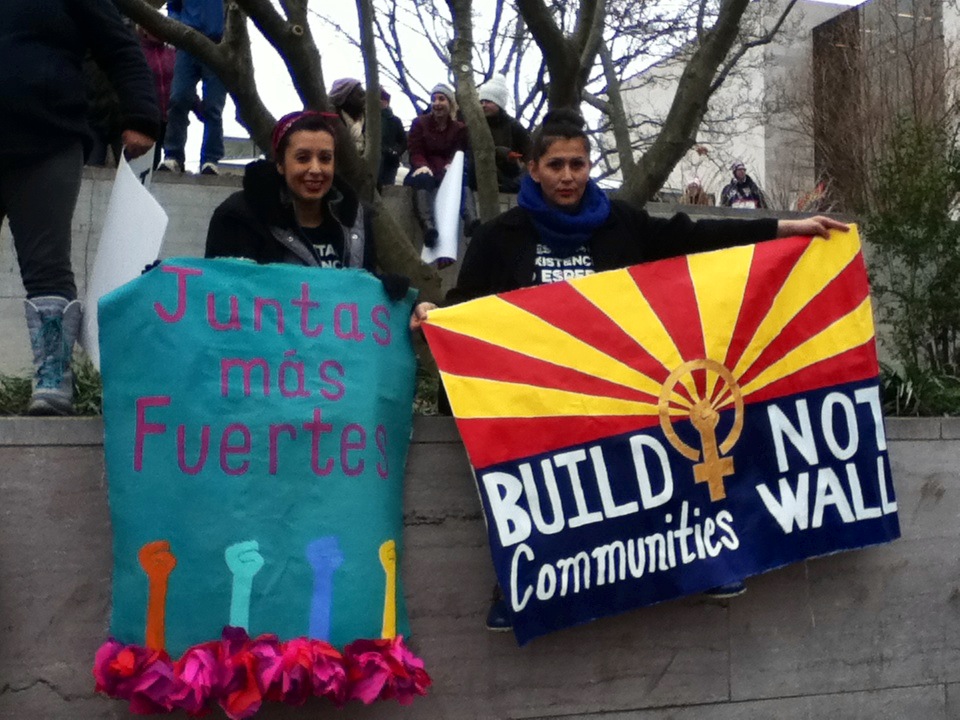 Vanessa Ramirez (right) holds a sign, “Build Communities Not Walls,” at the Women’s March. In addition to concerns about the ACA being repealed, Ramirez also worries about family members and friends who could be impacted by stricter immigration policies. (Taylor Swaak/ The Diamondback)

Anxiety plagues millions of people in the U.S. and around the world this week as we await the 2020 election results. Undocumented migrants, asylum seekers and refugees in particular, along with other marginalized groups, are feeling this stress with increased intensity — they have a lot to win or lose.

One thing is for sure: The next president will face serious immigration issues, especially as they relate to the 545 migrant children still missing from their parents, rampant violence and crime in the Northern Triangle (Guatemala, Honduras and El Salvador), and the effects of COVID-19 on undocumented migrants.

Undocumented migrants in Prince George’s County and across the nation depend on progressive migration policies and respectful relations between the United States and Latin America and the Caribbean to protect their humanity. In order to reduce the flow of undocumented migration, the next administration should work to promote dialogue across the Americas and the Caribbean, invest in foreign aid and increase pathways to legalized citizenship.

It’s no secret that a Biden administration would signify a positive change for policy toward the border and Latin America overall. Four years of Trump has shown us just how little interest he actually has in the region outside of upending asylum and using xenophobic rhetoric and policies to stop migration into the country.

Throughout his career as vice president and chairman of the Senate Foreign Relations Committee, Biden has proven his approach to Latin America is nearly the opposite of Trump’s. During his vice presidency, he made more trips to Guatemala alone than Trump has made to all of Latin America during his entire term.

Biden’s apparent interest in Latin America provides a unique opportunity for the U.S. to mend its relations with the region, prioritize human rights and focus on aiding populations seeking salvation from crime and violence. There’s also an opportunity for the country to help undocumented migrants within the U.S. who have been severely impacted by COVID-19.

Some essential U.S. policy considerations for the next four years would be increasing foreign aid spending and supporting the Pan American Health Organization, as well as other non-governmental organizations working to alleviate the effects of COVID-19 in Latin America and the Caribbean.

The current administration’s 2021 budget request is $1.4 billion for the region, which is about 18 percent less than the year prior. This reduction is extremely harmful to individuals in Latin America, especially as the entire world faces off against the pandemic. Reducing foreign aid spending on Latin America only raises the chance of undocumented migration from the region, especially as the Trump administration continues to cut ways to legally migrate to the United States.

A second essential policy consideration is to reunite the 545 separated children with their families. Separating children from their families is inhumane and a violation of the definition of human rights. The next administration will have to put serious effort into repairing the consequences of these atrocious actions by reuniting families and putting an end to policies that separate children from their guardians.

Lastly, the next administration will have to find a way to protect undocumented migrants within the United States, as many are essential workers and therefore extremely vulnerable to COVID-19. For example, Langley Park in Maryland, a neighborhood with a majority migrant population — much of which is undocumented — would greatly benefit from policies aimed at protecting undocumented migrants from the economic and health effects of COVID-19.

Undocumented workers should be eligible to receive paid time off so they don’t have to choose between going to work sick or losing their jobs if they stay home to recover and stop the spread of the virus. The next administration must enact policies guaranteeing that undocumented migrants aren’t risking their jobs by presenting themselves at a hospital or health care facility.

The Trump administration has exploited undocumented workers’ low-cost labor while doing absolutely nothing to protect their well-being, both before and during the pandemic. Regardless of who wins the upcoming election, they need to reverse the harmful policies toward Latin America and its migrants in the U.S. that have been the norm over the past four years.