Death by design: Windows in UMD’s buildings are killing birds 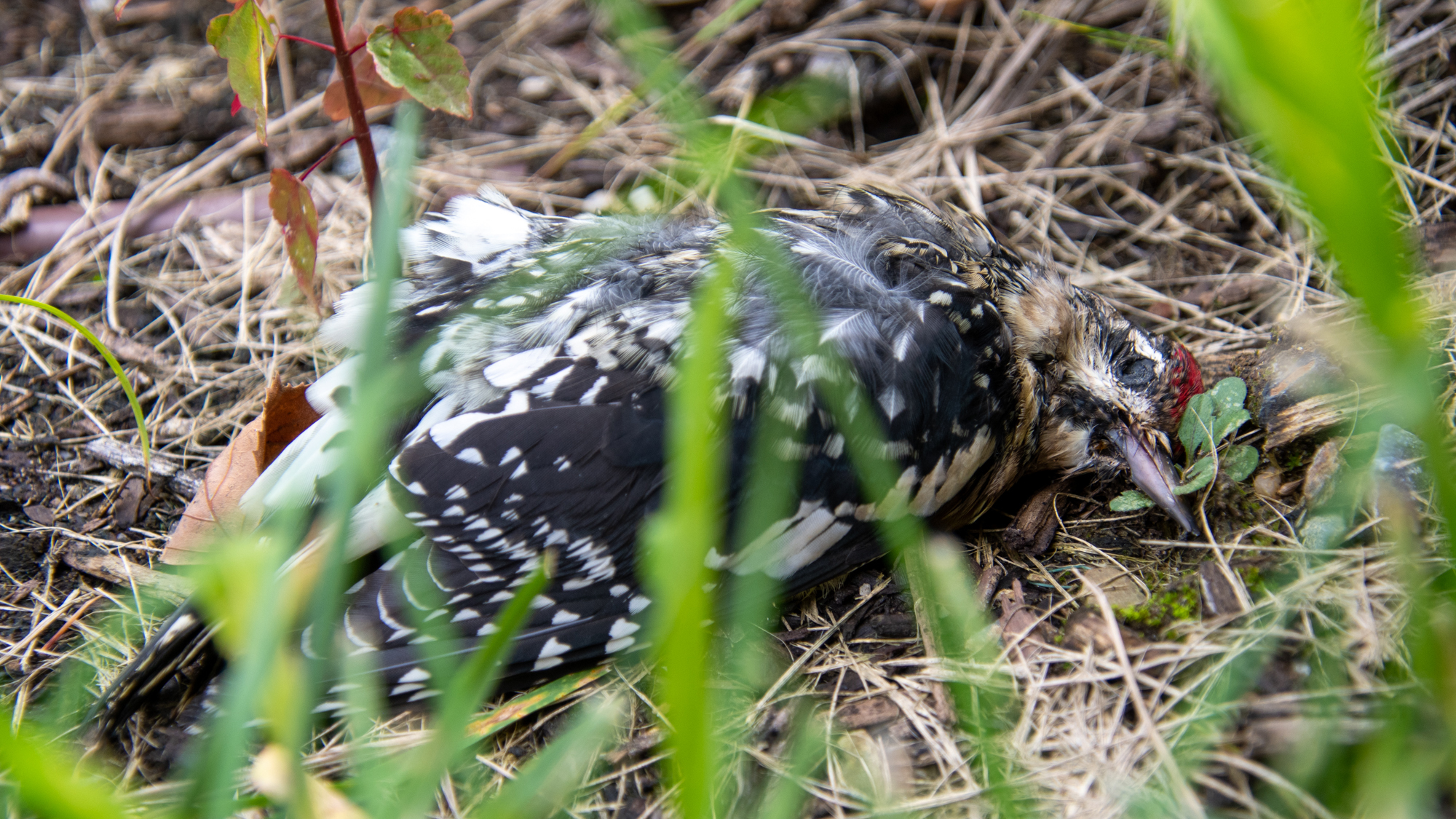 A bird that died after flying into the Iribe Center's reflective windows. (Joe Ryan/The Diamondback)

That’s the sound Sharif Uzzell heard while walking alongside the Iribe Center in early October. When Uzzell investigated its source, he found his answer by looking down: A bird lay on the lawn, motionless from the impact of the window it had just flown into.

Scattered across the grass were four more birds that presumably experienced a similar fate, with the autumn sun warming their otherwise cold and still feathers.

“They’re hitting the side of the building, and then they’re just hitting the dirt,” the senior computer science major said in a video posted to social media. “How does this get resolved?”

Within about a two-week window in the fall and spring, many birds embark on their migratory journeys, either flying south to escape the cold or north to a more moderate climate. And it’s during this peak migration window that some birds, like the five in the video, will collide into windows.

With the help of the University of Maryland’s Wildlife Society, Shannon Pederson, a lecturer in the agriculture and natural resources college, started a project called Lights Out UMD in 2017 to monitor bird mortality due to these collisions.

In the first two weeks of October and April, Pederson and an assembly of students arrive on the campus in the morning — usually at about 5 a.m. or earlier, before the janitorial staff arrive — to walk beside buildings in search of dead or injured birds.

Most collisions occur near the newer buildings on the campus, such as the Iribe Center and the Edward St. John Learning and Teaching Center, Pederson said. Throughout the nights or early mornings, when birds are exhausted from flying, they’ll see reflections of trees on the glass and think the windows are a place to roost.

[A Halloween without pumpkins: UMD fights effects of climate change on Maryland crops]

The goal of Lights Out UMD is to collect data from the collisions and discern patterns, which can then be used to advocate for modifications to those buildings, Pederson said.

“We’re walking around first to see where the problems are,” Pederson said. “And then, what could we do — what could we recommend — as possible management solutions.”

Madison Plunkert, a senior ecology and evolutionary biology major, said she’s attended some of these walks. In the early morning, she said she’d venture around the campus, collecting bird carcasses and writing down their species and the location in which they were found.

She found many house sparrows and European starlings near The Clarice Smith Performing Arts Center — another building, like many of the newer ones, that features glass windows.

Many buildings leave their lights on overnight, which increases the reflectiveness of the glass and causes collisions. That’s why the project is called “Lights Out,” Plunkert said.

The project’s name also lends itself to Lights Out Baltimore, a similar project that formed as an extension of the Maryland Ornithology Society. Lindsay Jacks, the director of the Baltimore project, said she helped Pederson create walking routes and find buildings to look for on the university’s campus.

In College Park, only one or two birds might be found each day, Pederson said. But in major cities across the country, collisions occur at a much higher rate.

For example, Jacks said she and her team collect about 500 birds in Baltimore each fall and spring by monitoring 20 to 25 buildings. This year is an especially bad one, Jacks added, with anywhere from 20 to 30 birds being found each day.

“It’s just really a perfect storm of weather,” Jacks said. “As they go over a foggy area, they have to go lower to see the moon. And as they go lower, they actually get confused by the city lights.”

These occurrences aren’t totally uncommon, though. In October, between 1,000 and 1,500 birds collided into Philadelphia skyscrapers in the span of just one night — a catastrophic event caused by fogginess, a full moon and buildings’ illuminated interiors.

A 2014 study conducted by researchers at the Smithsonian Conservation Biology Institute found that between 365 million and 988 million birds are killed every year in the U.S. from collisions with windows. A little more than half of these fatalities occur at low-rise buildings, such as the Iribe Center and the St. John Center, according to the study.

Pederson said that such a high nationwide fatality rate could have an effect on the larger ecosystem. Birds help pollinate plants, disperse seeds and consume pests that damage crops and can carry diseases, she said.

“It’s very sad to see ecosystem service providers dying,” Pederson said. “Especially when there’s things we can do to prevent it.”

But, Pederson said, bird-friendly modifications are possible, whether by changing glass windows or the lights inside.

For one, windows can be retrofitted using a “two-by-four” rule, wherein dots are inserted on glass surfaces every two inches horizontally and four inches vertically to make the window visible from the bird’s perspective. Bird-friendly glass can be purchased as well, Pederson said, although it is usually more expensive than traditional glass.

Indoor lighting can also be modified. Pederson suggested that buildings can use motion-sensor lights, or that existing lights be restricted to only angle downwards onto sidewalks, so birds aren’t disturbed by the reflections they can produce.

While only a few seasons have passed since Lights Out UMD’s inception, Pederson said she and her team will launch a campaign on the campus to advocate for these modifications once they collect enough data. So far they’ve been able to see which buildings are problematic, Pederson said, but their specific recommendations remain unclear.

Still, calling for these changes requires relationships with university administrators, Pederson said. The funds for retrofitting windows or getting new lights can be acquired through grants that the university can help administer.

According to a statement from a university spokesperson, the Iribe Center was built to the 2012 International Green Construction Code. The building’s exterior glass facade brings in natural light and promotes energy efficiencies, the statement read, which is a “key part of UMD’s ongoing efforts to reduce greenhouse gas emissions 50 [percent] by 2020 and achieve carbon neutrality by 2050.”

Yet, the statement acknowledged that bird collisions do sometimes occur near buildings that feature expanses of glass, and that Facilities Management will continue to monitor the Iribe Center area on a daily basis.

That being said, the university has taken some initiatives to preserve wildlife — and birds in particular — on the campus. One of Pederson’s undergraduate students received a grant to install birdhouses around the campus, and with the help of the staff at The Clarice, about 85 birdhouses will be put up in the coming weeks.

“When spring rolls around, we hope that the birds in our area come back and decide to nest in the new bird houses we’re creating for them,” said Ryan Knapp, director of operations at The Clarice. “It was a happy marriage once we found the right players to put together.”

Pederson wrote in an email that the relationships made across campus groups — such as the one formed with The Clarice’s staff — show that the university truly does value wildlife. And as more data about bird collisions get collected, she said she hopes to continue these efforts.

“I want to keep collecting data, and then develop those relationships, make some recommendations, implement those recommendations,” Pederson said. “I don’t have any intention of ending this.”